The Gospel According to Jesus, Queen of Heaven – Summerhall, Edinburgh 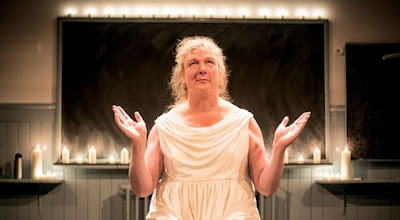 Forgive me for being personal, but, well, hopefully it’ll justify itself. As I’ve already noted at least once this month, both my parents were ministers. Happily, their denomination – the United Reformed Church – is one of only two which gets a note acknowledging its support in the programme of writer/performer Jo Clifford’s The Gospel According to Jesus Queen of Heaven. Which made me rather proud. It also partly explains why, rather than finding this show either challenging or revelatory, I found it – watched at 10.45 on a Sunday morning – surprisingly familiar to an almost Proustian extent. Yes, its format does echo a Sunday morning church service (minus any singing, hymns or otherwise), but, more than that, the beautifully written, colloquial retelling of Christ’s parables and moments from the life of Jesus felt entirely in keeping with what I grew up with. (Albeit with more of an emphasis on trans*women, Queerness, and gender equality.)

As a result, I think I took most of what is perhaps surprising and useful for other audience members in my stride – the idea of Christ is a radical whose life and works are entirely incompatible with Conservatism, capitalism, bigotry, intolerance, etc. – and instead spent a lot of my time wondering about the possibility of critical engagement.

I’m not a Christian. And one of the main reasons that I’m not is that I don’t particularly believe in God. Much less heaven (or any other kind of supernatural post-death loyalty scheme). And this is a real sticking point when it comes to what Christ said. Which, interestingly, is not wholly resolved by Clifford’s Gospel either.

– on this point, I’ve just realised I should at least explain that this is a one-woman show in which Jo Clifford essentially plays Christ. But a Christ so closely identified with herself that there’s either seamless slipping between them or no distinction between “performer” and “character” at all. This isn’t because Clifford is claiming to be Christ, so much as it’s just a very workable way of performing the stories, making the points, and shifting the ground that needs to be shifted. It’s emphatically not delusional David Icke territory, but instead something more akin to that Christian message that Gods is with us and within us all always –

But, to return to the sticking point, the unresolved problem with Christ’s teaching is the endless forgiveness of others, the praying for them, the loving thy neighbour, the not condemning, the not judging others, etc. I get how it’s wonderful too. I do see that. What I don’t see (in common with Simon Peter) is quite how you’re meant to turn that into any sort of meaningful act of resistance. No. Not quite that. I see that being loving and forgiving in a world like this is quite the act of resistance in itself. I do totally get that. But, if we love and forgive, do we not also accept, condone, allow, and permit? Sure, in the context of the woman taken in adultery, no one throwing any stones is A Good Thing. I’m less convinced that letting he who is without sin sort out – oh, I dunno, anything from welfare cuts to genocide – is enough. On this point, Christ is frustratingly passive. We sort ourselves out, live life to the best of our abilities, and just hope we don’t come across too many people who require us to turn the other cheek, it seems. And this too, is, I think, what Queen of Heaven ultimately says. My problem with this is it seems as much like a complete recipe for slavery as it does for goodness and enlightenment.

Of course, it’s not a church service. Clifford isn’t directly telling us it’s the word of God. But then, on the other hand, she’s not not. The piece is offered with a very particular atmosphere around it, and it offers a version of Christ’s teachings which de-problematise those lovely ideas for a bunch of new people. All of which is well and good. It feels trite to mention, but I did like this piece an awful lot. I have almost complete sympathy with what it says...

However, this is a piece which essentially tells us to love one another, and bless those who work against us, but, in its slightly secular way – the afterlife is here pretty much massaged into the background if not oblivion – it also leaves us without any sort of backline, not even one as radical as “Heaven for everyone” as outlined in The Christians. So, taken to its logical end, we love and we bless. And we don’t judge, and are not self-righteous. And where the hell does that leave any kind of resistance?

It’s a lovely Gospel, definitely, but I wonder if, in these vicious times, we don’t need one with a lot more critical intelligence and a lot more fight in it.
Posted by Andrew Haydon at 20:55