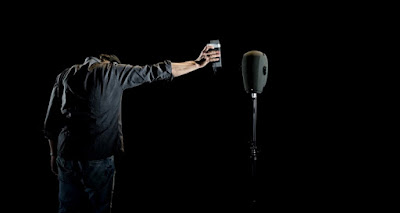 What is The Encounter?

The straightest answer to this is that it’s new “solo” show from Simon McBurney/Complicité.

“Solo” gets scare marks because while McBurney is the only person on stage there is such a remarkable level of artistry not only in his writing and performance, but also in the sound design, lighting design, video design, and the operation of these elements, that calling it a “solo” is a bit like only giving a medal to the member of the relay team who crosses the finish line. This is every inch the ensemble piece. McBurney even stops his tumultuous applause at the end to verbally acknowledge this; particularly the “musicians” of the sound and lighting boards.

And he’s absolutely right to do so. I watched the show from row N. Right at the back of the not-too-deep auditorium and right in the middle, slap bang next to the light‘n’sound desk. It was frankly a brilliant seat. If you like being able to watch the orchestra at the opera you’ll understand why. As well as everything you’re “meant” to look at and listen to, there was also the pleasure of seeing the “hidden” performances of the operators; the fact of the auto-cue reminding me that, no matter how improvised it might seem, most of it is already written down.

I think it’s safe to say that The BIG THING with The Encounter is the sound design. Everything else – writing, performing, direction, design, lighting, video – is also pretty bloody transcendentally astonishing, but it’s the sound design that is essentially introduced as another performer. The piece opens with McBurney chatting to us, essentially telling us that it hasn’t started yet until it has.

He invites us to put on our headphones, and then continues talking to us through a radio mic. Then, via the head-shaped binaural microphone, he demonstrates how we’ll hear his voice, and movement, according to his relationship to this device. He demonstrates this by walking round it talking and, yes, he does indeed seem to be walking around each of us. It’s probably the sort of thing we’re subconsciously slightly used to in cinemas, and perhaps if we listen to well-recorded radio dramas on headphones. But it still feels *incredibly space-age* and immensely satisfying. Other sound-tricks are demonstrated, one obvious one – lowering the pitch of his voice speaking into a microphone creates the American central character of the piece. A photographer travelling to the Amazon and getting obsessed with photographing a lost or hidden tribe.

The shifts, sometimes even leaps or massive jump-cuts, are so seamless and light that over and over again you find yourself not noticing that everything’s changed until you’re right in the middle of a new “scene” or “place” or “thing”, and, even though you’ve known exactly what’s going on the whole time, suddenly you’re somewhere else. This sense of lost-ness is crucial to the story being told – essentially an adaptation of Petru Popescu’s Amazon Beaming. Publisher’s plot synopsis: “In 1971, after years of searching, the photographer and writer Loren McIntyre flew deep into the Amazon interior to look for the source of the great river, and for the Mayoruna tribe. Never before contacted by the outside world, they were rumoured to be the only people who knew the true source of the Amazon. Lost in the jungle and kidnapped by the Mayoruna, McIntyre was at the mercy of the extraordinary war-painted “cat-people” with spines bristling out of their lips. He claims to have reached his goal by communicating telepathically with the tribe’s head shaman.”

But it’s only partly about this narrative. The way The Encounter tells it is well over half the point. The staging, the recordings, intersperse McBurney the narrator, with McBurney playing Loren, with McBurney, the father of a little girl who keeps coming into his room when he’s making Biaural recordings. (We suppose these recordings are genuine.) Being friends with Sound Designer Gareth Fry on Facebook, I’ve occasionally seen photos of him crouched in some Very English Woodlands with a group of game mates stamping and rustling around in wellies for him in order to create some of the ambience of the vast forests we imagine ourselves in during The Encounter. Other times, they really are in the Amazon, though. “Recording the silence” for all I know. It’s trite to say the man is a genius, and somehow disingenuous, given that we’re on first-name-terms. But, Christ, the sound on this production really is something else.

What’s fascinating as well is the seamless mixing of recorded sound with live foley, created by McBurney himself on stage often using nothing more than miles of discarded video tape and a loop pedal.

*Of Course* we’re reminded of Katie Mitchell’s pioneering work in this field, from Waves right through to Fry’s work with her on Wunschloses unglück. But, in terms of the staging, this is something altogether different. Essentially cinematic, but without a single concrete visual image. Or rather, not one single literal visual image. McBurney stands throughout on an essentially empty stage – there’s a table, a box of videotape, several crates of plastic water bottles, a few mic stands, and the back wall is a huge gloriously overstated foam sound-proofing thing of regular chunky pyramids jutting out of the wall.

The use of video is – as far as I remember – entirely non-naturalistic. Patterns emerge, are superimposed onto..., appear to ripple and float across the back wall, but there’s never a film of some jungle. There is haze and lighting. The spaces of the stage – for something that is essentially a long, flat, continuous space – feel cleverly demarcated, marked out, differentiated. We feel the movement, not only round the stage, but through the story, through even the jungle. And the sound, all the while, drags us deeper and deeper into believing it all.

It’s the sort of show that there really *can’t* be photographs of (obviously not literally, see top). But I look at the photos there are online and think “Christ. Surely there was a jungle in that bit” or “I wish they could have taken photos of what I was seeing *inside* my head at that point: that was visual theatre at its finest”. This also feels intimately bound to how both the story works and how the piece works: the protagonist can’t really be in the situation he is, might well be hallucinating, and yet it also is happening. Similarly, while we know – really – none of this is happening in front of us, it absolutely bloody is.

What’s most impressive is the way the thing leaves you feeling (left me feeling. Whatever). It achieves a kind of hallucinogenic transcendent feeling. Something as close to mystical as I’m prepared to acknowledge. Something also weirdly like a modernist sermon or parable. Something about time, and humanity, and life and death, and about reality. Christ. It really does feel like an intensely profound piece of theatre. I’m not sure I could write down what precisely I *learned* from it, and I don’t think that was the aim. Instead what we have is this kind of raw mass of feeling and thought and art/artfulness all offered to us as a kind of benign, message or offering of hope. And what we leave with is a feeling of having been imperceptibly rewired the better to receive it. “The Encounter” is an excellent name for it.

This is what the EIF website has by way of credits:

It feels somewhat incomplete to me, but printed programmes were £4 and I didn’t see any little photocopied free ones. But, yes; each and every one of those people is a bloody marvel, as are the unnamed people involved in any way with this show.
Posted by Andrew Haydon at 18:32