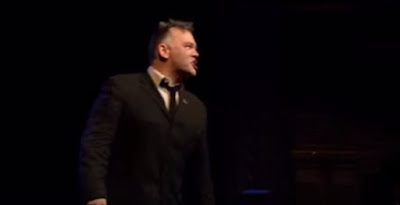 The other morning I had a read through pretty much the whole of Fringe Pig. I didn’t mean to, it’s just very easy to read; it’s amusingly written and insightful about its subject. In case you don’t know, Fringe Pig is another Edinburgh Fringe reviews site, except that instead of reviewing comedy it reviews comedy reviewers. Among its many bêtes noire are theatre critics who come to Edinburgh, mostly review theatre, and then get a press ticket to one comedy show because it’s by their favourite comedian and then give it a hopeless write-up because they know zip about the context. Hopefully, the fact that I paid the full £12.50 (plus booking fee) for my ticket will mitigate their scorn a teeny bit.

Re: context – No, I’m in no position to compare Stewart Lee to any other comedians performing live in Edinburgh, because I haven’t seen any other comedians performing live in Edinburgh. Not for a few years now, thinking about it. I have seen some other stuff that’s been thought about, written down, and been performed, though. Sometimes all by the same person. And sometimes that’s also included talking to the audience and jokes. So let’s think of this “review” as an experiment or a work-in-progress. Which Stewart Lee’s A Room With A Stew also is.  (And, fuck it, he casually namechecks Brecht's V-effekt and drops in a line from Gogol’s The Government Inspector without even crediting it, so theatre-literacy doesn’t seem an entirely misplaced standpoint from which to watch.)

Stewart Lee’s A Room With A Stew is, on one level, an hour and a bit of him trying out and honing the material for his new six-part BBC series. On the day I saw it, at 2.15 in the afternoon, he had pretty much filled up the Assembly Rooms Ballroom space. Which isn’t small. I imagine at the very least he covered his costs. Which, for R&D, is a pretty neat trick. Under-funded Avant Garde Theatre Companies should take note. (Christ, so should Lyndsey Turner and Sonia Friedman: fuck worrying about “previews”, charge entry for every minute of the rehearsals too...)

I say “on one level”, because really Lee’s whole shtick is something of a double-blind. He tells you exactly what he’s going to do and then both completely fulfils and entirely subverts that promise. Yes, it’s a preview, but it equally feels like 1hr20(?) of the best *polished* stand-up you’re going to see all year (part of the polish in question being the seemingly effortless lack of polish). He says he doesn’t do jokes and then both does and doesn’t. He says he obviously can’t do his proper material for this audience, because this audience doesn’t get him; *at the same time as explaining that that statement both is and isn’t true*, even fully deconstructing the truth and otherwise of the idea via theatre critic Dominic Cavendish’s idiotic (first) write-up of the show for the Telegraph. (We should note the existence of a second review, in which Cavendish at least upgrades his star-rating, even if refusing to acknowledge the glaring lack of thinking in his first piece.)

It’s a maxim of “difficult” “experimental” theatre that, in order to also be accessible, it needs to teach its audience how to watch it as the audience is watching. This is pretty much precisely how Lee’s show also operates. Indeed, maybe half the show is about the mechanics of “the show” – even unto the bit where there are bits deconstructing the deconstruction. All the while telling us that we don’t get it, and all to the massive amusement of what would appear to be the entire audience. The biggest joke being: this is a very famous comedian off of the telly, whose work is watched by, well, probably millions, whose persona is a grumpy middle-aged man who believes he is much better and cleverer than everyone else, like some sort of petulant six-form anarchist poet. And at the same time, consequently, actually kind of is better and cleverer than everyone else (as I might secretly believe that petulant sixth-form anarchist poet is).

The other night at Forest Fringe at their impromptu How To Be An Artist event, the equally peerless Chris Thorpe – as part of his n-point manifesto – sang the whole of eighties hair-rock band Poison’s Every Rose Has Its Thorn solo with an acoustic guitar, to conclude: “#4: Fuck Irony”.

It was a troubling moment (maybe just for me), because, a) post- Stewart Lee, I’d been thinking irony was probably alright again, at least in some very clever triple- or quadruple-bluff kinda way, but also because b) I wasn’t entirely convinced that performing Every Rose..., no matter how sincerely, *does* escape irony. I mean, it just is quite ironic. (And, yes, I could explain how.) Rather than trying to fuck irony, Lee’s show accepts its inevitability, and tries to work with it in order to produce something more sincere by working around and with the fact that irony is inevitable. Really, what Lee is doing is forcing people not to listen and agree, but to think for themselves. There’s very little (if anything) here which even hopes to be taken at face value. Or at least, it does, but at the same time, it demands a pretty thorough examination of what face-value is and why anyone would even want something to exist with so few facets.

Anyway, that’s what I thought about during A Room With A Stew. It’s incredibly intelligent. It’s brilliantly written. And it strikes me that it could just as reasonably stand comparison with Tim Etchells and Aisha Orazbayeva’s Seeping Through, McBurney’s The Encounter, or Barrel Organ’s Some People Talk About Violence as other stand-up. And, mercifully, because it’s just as much about meaning, performance, intelligence, irony, resistance and thinking as those shows, I don’t feel like a dick for making those comparisons. Indeed, more than that, this is a performer at the top of their game who it’s a privilege to get to see live, and for so little money. And one that I’d recommend to everyone making live work, whatever genre.
Posted by Andrew Haydon at 23:29

excellent appraisal. my lady is scared of stand-up comedians live and eye don't blame her so i don't speak from experience , but i think, once you've accepted that he is brilliant, his shit just continues to get better.

Came here from the Fringepig tweet. Completely agree about Stewart Lee and Tim Etchells being kindred spirits, I think it's got something to do with being exposed to a lot of Mark E Smith at an impressionable age...

*bêtes noires* The adjective should be plural too.