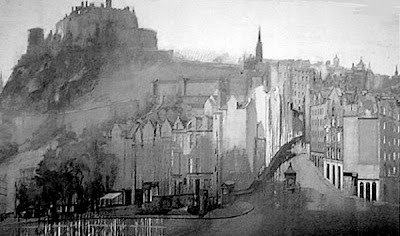 In yesterday’s piece, Theatre & Privatization, I presented a short, simplified case against sponsorship, private patronage, and the reliance on “philanthropic giving” in state theatre. This piece is essentially about the problems of the “other side”; about “independent theatre”.  It is a less conclusive, less certain piece than ...& Privatization, not least because I don’t really know what I believe in this context.

At the moment, I’m sitting in Edinburgh where the Fringe Festival is about to start. And – name-the-elephant-in-the-room time – the Edinburgh Fringe is the single largest expression of faith of the free market that theatre has (possibly in the world). As as Lyn Gardner identifies in her thorough piece about the economics of the Fringe in the Guardian yesterday: “For three weeks of the year, Edinburgh is where the UK theatre industry can be found en masse, those hard-to-arrange meetings magically materialise, and shows that nobody has had the time to see (despite repeated invites) suddenly attract programmers...” And it’s the blackmail of this promise/possibility that continues to attract the youngest and poorest artists to the hyper-inflated rents and venue charges of the Scottish capital. (And, *of course* the younger and less established you are, the more you’ll likely have to pay to perform.)

Yes, there are of course anomalies, in what is, after all, a festival of anomalies. As Pleasance Theatre artistic director Anthony Alderson points out in Lyn’s piece, one of the main financial beneficiaries of the Fringe is Edinburgh University, which still provides a free education for Scottish students. On the other hand, last year’s most popular venue, Summerhall, is, as far as I’m aware, privately owned by one man, and registered – perfectly legally – in an offshore tax haven. Ironically, this year its (brilliantly) curated programme there includes the British Council Showcase piece Islands by Caroline Horton. But, like with much capitalism, you find yourself kind of shrugging and thinking, “Well, maybe it’s better that an arts venue is offshored, so its profits aren’t handed over to the government to be spent on Trident, or something.” Maybe you think that, or maybe you think, “Well, yeah, it *is* a shame that this lovely venue is ultimately making one person much richer than everyone else, but, y’know, it’s not being done *obnoxiously*, is it? And the work here *is* really good...”

And this is rather the problem in a nutshell: British theatre is mostly built on the hugely likable but ideologically-unsound basis that people will just find a way to do what they want. As I say in Theatre & Privilege (mine) it’s pretty much what I’ve done, so who am I to lecture anyone else?

In Theatre & Privatization I set out a fairly grand vision of state sponsored theatre and talked about my dislike of the new breed of private theatre. But what separates a “private theatre” from an independent theatre, or an as yet unfunded fringe theatre, or a scratch/pop-up venue? In other words, how is The Yard (which I like very much) really any different to The Print Room (which I don’t)? Yes, the size of the backers’ bank balances and the audiences being chased are different, but, really, in ideological terms, isn’t to condemn one to at least throw shade on the other?

The problem with wanting everything to be state-funded is the state. Granted, we could all wish for a much better state on every conceivable level already. But, I find it difficult to imagine – even in a perfect world – a state that could take democratic, informed, fair decisions as quickly as a person can just take matters into their own hands and impatiently set something up.

The early histories of some of our best, most progressive theatres almost always seem to be some small group of friends who – tired of waiting for recognition, or a slot in a state theatre, of for their work to even be understood/recognised as theatre – take matters into their own hands and set something up themselves. This model of self-starting is pretty prevalent even amongst our best known and most-loved publicly funded theatres – from Forced Entertainment, Complicite, and Frantic Assembly to the Almeida, the Yard, and, well, basically the Royal Court and the NT (maybe the NT secured the funding first, can’t remember).

Perhaps the real question doesn’t arise then, but when the embryonic theatre or company that has been created develops: whether they chose public money or private profit. Of course, I’m not so naïve as to believe that choice is necessarily one that they get to make themselves, nor that the successful outcomes we know today don’t represent some hard struggles in the past. Nonetheless, the model of the private enterprise that gains state subsidy is clearly the only model we seem to have in Britain. It is perhaps worth briefly looking at why this is.

As I suggest above, Britain’s main model for anything at all happening in theatre these days is small groups or individuals persisting with their own thing. It is depressingly Thatcherite. But, I think we’d really struggle as a country with the external authority of the alternative. As we all know, Germany’s theatres enjoy much, much higher subsidies than British theatres. On the other hand, their state theatres really do enjoy a near monopoly on theatre production in Deutschland. I’ll freely admit I know much less about Germany’s freie szene (independent theatre scene), but I'm pretty certain it’s much smaller than it is in Britain. Perhaps this is in part because of the excellence of the main houses, but I think it’s perhaps also partly to do with it’s almost complete and continued separateness.

In Britain, yes, there are definitely different types of theatre, and, God knows, we’re fond of our taxonomy (although trying to find names to describe what sort of a thing a thing is isn’t a bad thing in itself), but I’d argue that the different types of theatre do exist on a sort of continuum. Or at least, a a few sets of continuums, and with a bit of crossover between the sets too. What I mean is, in Britain, you can, without training, pretty much bomb your way into work by putting on great work in unsubsidised venues, until subsidised venues give you work. And in those unsubsidised venues, you will often find cheaper/smaller-scale versions of pretty much exactly the same sort of work as you’ll get picked up to do in the subsidised houses, made largely by people attempting to get work in the bigger theatres.  Fringe work, in short, need not be a different genre, but rather is often a self-funded (or crowd-funded audition). That option seems much more rare in Germany.

The other major difference, is that in Britain we stupidly over-supply/over-train actors (and, similarly, with the above-described situation with the directors, we effectively have an open door policy there too).  I don’t know the actual figures (four articles – here, here, here, and here – all fail to give a concrete number, which must be available somewhere) but let’s call it 3,000 newly graduated trained actors a year. Are there an additional 3,000 new parts every year? (because all the previous generations don’t suddenly want to give up, do they?). And, as with directing, absolutely no training doesn’t mean absolutely no work, anyway. In Germany, actors and directors get paid very well, but this happens because they work in stable employment in rep in a state theatre, and only a tiny number of extra actors and directors are trained each year. And very, very few directors or actors who haven’t been trained get anywhere near a theatre (is my understanding).

So, another question facing Britain is, having arrived at the stupid situation we’re in now – where actors and directors will presumably fight tooth and nail for their right to exploit themselves until they either start to get enough professional work to live, or give up – would anyone voluntarily see it reformed, so that we only train, maybe 100 new actors each year, and an extra one or two new directors? They will – guaranteed – all be brilliant. They will all get work all the time. And they will all have to be paid properly.  But does this appeal to anyone at all?

The problems seem to me to be: on one hand, we’re addicted to the gamble, the lottery chance that it might be you who gets to be the next Andrew Scott or James McAvoy; and on the other hand, more optimistically, we recognise that it’s easier to revolutionise, to force change – at least aesthetic change – by doing things ourselves. Unpaid, perhaps. But somehow making enough waves that we change the ecosystem, are invited to the table...  This also stems, I think, from Britain’s comparatively anti-authority culture. Something I’ve often been struck by in Germany is the respect in which older directors are held. In Britain, it might be fair to say reverence is the exception rather than the rule.

We have, in other words, a culture (even in theatre) that is completely soaked and saturated in assumptions that make it the perfect breeding ground for capitalism, for free-marketeering, for near-Ayn Rand-like levels of individualism.  Of course there are a load of lefties in theatre, I don’t deny it. But, problematically, while theatre itself continues to exist in the middle of a hyper-individualist, free-market, it seems likely that while people make themselves the one exception they will allow, the entire self-serving enterprise will be impregnable.

The same is (of course) true of criticism. There is no better way for me to increase the access of working-class, BAME, female, or disabled critics than simply retiring right now. And for nearly everyone fitting my broad description (white, male, privileged, etc.) to do likewise. Obviously, at the moment, this not being an equal society, that scenario would as likely result in *almost no theatre critics left* as a sudden magical flourishing of a fully diverse rank of critics to take our place. We can work on addressing that, but, FFS, it’s 2015. Why hasn’t it already been addressed?

And, as I point out in my earlier piece today – and, God knows it’s not an original thought – on one level, the people who will find it easiest to persist in making theatre (or criticism), will be those who have a certain amount of financial security (privilege) already. On the other hand, that it is equally possible to make theatre (or criticism) for next to nothing if everyone accepts that that’s the deal, that they’re not trying to become “professional”, or that they’re happy to understand it as the thing they do additional to/funded-by their day job.

Chris Goode has written about such a model before, and one of the things Nicholas Ridout’s book Passionate Amateurs does is to talk about possible theatres outside a marketised relationship. Similarly, I think both Lyn Gardner’s recent piece about Slung Low, and, in a different way, the ongoing work of Forest Fringe both point to possible ways forward, perhaps slightly related to this shift in the relationship of theatre to money.

*Obviously* one short blog piece isn’t going to be able to fully propose an alternative model for theatre, for the retrenching of how society works, and everything else necessary to stop the model by which most theatre is created being ultimately economically abusive. But, I hope by thinking about it out loud, even in these most stark and obvious of ways, it might at least spur someone else to have a few really good ideas. Because I think we really need some. Urgently.