Song From Far Away – Young Vic 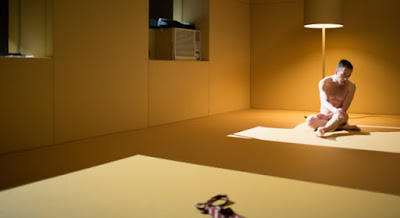 Song From Far Away is a very slow, deliberate piece of art. In Simon Stephens’s script it takes the form of six letters written in pencil, by hand, to Willem’s recently deceased brother. In Mark Eitzel’s contribution to the piece, it takes the form of a song, which, in Ivo van Hove’s minimal production, is fractured across the narrative as an earworm evading capture. In Ivo van Hove’s production, the letters become a spoken monologue, addressed by performer Eelco Smits (Willem) always to that empty patch of air about three metres away from him, never past the notional fourth wall of Jan Versweyveld’s minimal, beige apartment/hotel set. In the lighting plot (also Versweyveld), the piece becomes the six days and multiple locations in time-lapse as the letters describe their author s passage across the Atlantic from New York (formerly New Amsterdam) to echt Amsterdam and back again.

As a piece of theatre it is reflective and thoughtful. “We exist in the gaps between the sounds that we make” says Willem, adapting Debussy. But maybe it’s the notes we hear here, more loudly. We hear, for example, about more of the international flights and hotel rooms that are increasingly a mainstay of Stephens’s work. We hear echoes not only of the death in Sea Wall, but also of a different little child, very much alive. We see a belligerent drunk father. We see his son also drink too much. We hear about another gay man ordering another White Russian in another lonely, anonymous bar. We follow this same man home, trying to get home, trying to discover a sense of home, where his home is. Standing in the house where he grew up, his mother tells him, “Go home”.

In Jan Versweyveld’s set and lights, we see echoes of van Hove's recent (regrettable) Antigone, but also, uncannily, Mitchell’s/Clachan’s Wastwater and/or Mitchell’s/Vicki Mortimer and Alex Eales’ Idomeneo. But beyond the bounds of theatre it most vividly recalls several Francis Bacon triptychs – the endlessly oppressive neutrality of the walls subtly altered by lighting into the sickly yellowy hues of this paintings, in stark contrast to the deep black rectangular windows. The skin of the human figure somehow pinker and more raw, for being trapped against such a background, and often contorted, naked and in agonies of grief.

Maybe, in the printed script you also hear the imagined echo of Stephens’s own voice reading the text, or the voice or Andrew Scott; or see the imagined landscape of Longhurst’s Carmen Disruption, or Nübling’s Pornography; and feel a bit wistful. And maybe in the staging you also catch a hint of A View From The Bridge or The Roman Tragedies and wish Song From Far Away was a also bit more banging. And, depending on temperament, you blame yourself, or the new thing for this. It is interesting, the stillness here. And the performance. You maybe wonder whether because it’s being acted in the performer’s second language, whether there’s more of a disconnect between the words and the delivery. You maybe wonder if in Amsterdam it’s going to be done in Dutch, and whether it’ll feel more connected. Or whether the sense of dislocatedness is a deliberate strategy anyway, to reflect this dislocated Dutchman returning from America (where obviously he’ll be speaking English the whole time, and has learnt to say “route” so it sounds like “rout”).

It’s interesting. It feels at once like “classic Stephens” territory – the recurrent themes, character traits, jobs, reflections, motifs; fed into a blender to create a single speaker, reflecting and recounting himself and the world around him – and at the same time, because of the production, somehow much more calm, resigned, measured. How the text sounds in my head, reading it this morning, is quite different to Smits’s performance of it.

There are beautiful moments – the first moment the song fractures the dialogue suggests how every musical ever should be performed, and there’s a thing where dual lights skitter their light across the back wall moving Willem’s shadow. A performance of his father’s grief. The ever invisible addressee of the monologue. But, yes: very slow, very still, and yet somehow it doesn’t make you (me) really *feel* the sadness.