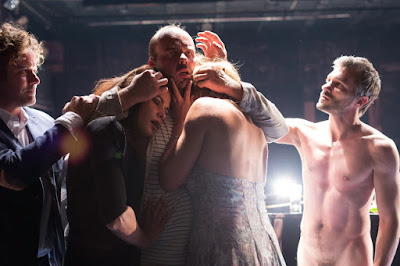 I was a huge fan of Jernej Lorenci’s Iliad at BITEF last year.

I should say, first off, that the surtitles were squint-inducingly dim, very high up, badly out-of-sync [although the performance is, I think, improvised, so maybe text surtitles also do it a massive disservice] and that my chair wasn’t the comfiest, so I was not in an ideal position to appreciate very much. Visually the piece is very well made. And I think, postdramatically, it was also incredibly astute (at least, right up to the point where I thought it wasn’t).

The action of the adaptation pretty neatly mirrors the action of the original – performs the same functions – but with all the ornate crap stripped out; the Philippe Starck Louis Ghost version of the original, you might say. However, Lorenci and his dramaturg Matic Starina, don’t appear to have done much to alter the *somewhat* misogynist premises of the original. (Sure, you *could* argue that Molière is more of an equal-opportunities offender than that, but this entire play is premised on the idea that educated women are essentially inherently a) ridiculous, b) pretentious, c) amusing d) more so than men, or it would be men in the title. The only tiny thing in Molière’s favour is that, as a result of being the butts of the joke, the women at least have larger parts/more stage time/more lines.)

I mean, it does feel like there’s an awareness of those premises being problematic. The whole production is in quote marks. The problem of the women is one of superiority and elitism, not pretension per se. Indeed, they really needn’t be women for the comedy to work, such as it is. But nonetheless, they are. Now, I don’t know if Lorenci is skewering some particular, leading Slovenian cultural elitists here, and if he is, perhaps that makes the choice of play breifly understandable.

Except then there’s The Problem of the Plot: very briefly, in the Molière there’s a daughter who wants to marry someone other than the terrible poet that her mother wants her to marry. In this version, this is represented by the daughter and the man she wants to marry, coming in, both stark naked, and sitting about for half the play. And, look, I do get that it’s also dramatically/visually effective, but at the same time, it doesn’t half feel unnecessary. *Then* – in a departure from the Molière, the poet her mother wants the daughter to marry essentially strangles her to death, and leaves her naked body lying on the stage until the end of the play.

I don’t think it really says anything useful, and what little it might be saying is completely overshadowed by what appears to be the crashing misogyny of this gesture. (Although, the piece is devised by the company, so I don’t know who suggested who do what. For all I know it was the woman playing the daughter’s idea...)  But that doesn’t happen until near-the-end, so there’s a lot of wrestling with What’s Are They Trying To Say Here? that goes on before that feels like it negates it all. I have to say, I found the whole thing made me feel cross and rather grubby,

However, the piece did also remind me of what I think is a crucial and emerging trend in mainland European theatre; that is: Theatre that hates theatre; theatre that properly attacks theatre for all the reasons that theatre needs attacking. I mean, yes, sure, maybe it’s an empty gesture. Maybe once everyone’s turned up, it’s a bit naughty for theatre to tell them off for turning up to watch theatre. I certainly don’t see it taking off as *A Thing* in prissy, audience-development-land England, where theatre is held to be A Marvellous Thing; and where we condescendingly don’t want to go confusing New Audiences by telling them that theatre is a criminal, fascistic mechanism of bourgeois power (much less actually attacking New Audiences for their complicity). But, well, there it is. 99 Words For Void did it better, more openly, and more subtly (and, Christ, without anything that could be taken for misogyny), but I think it’s the direction UK theatre needs to head before making nice again.

Anyway, I’ll just leave that thought with you guys.


[Oh, positive Slovenian review of this show:
“At first sight, The Learned Ladies directed by Jernej Lorenci doesn’t have much in common with Molière’s comedy other than the names of the protagonists, the text is, in the vein of an authorial project, not only modernised, but also completely improvised ... Regardless, this is all about detecting identical anomalies which today manifest themselves completely differently, yet in their essence remain almost unchanged. Among these are ostensible knowledge, affectedness, shallow culture, the idolatry of self-proclaimed artists, the intertwining of relevant and pop contents, the contrast between the conservative and the "avant-garde", tiredness, weariness, exhibitionism ... And the eternally questionable and manipulative strategies of achieving goals on the one hand, and the a priori refusal of culture and art as parasitism; all this is presented as an event, as something that should give an image of a real, unmediated project.”
(Peter Rak, Delo)]