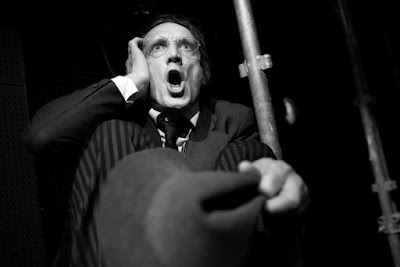 [not so much a review as a sulk]

I did not like this adaptation of Knut Hamsun’s novel one bit. I didn’t like the set, I found the text [surtitles] stiflingly dull, and I found the lead actor’s chosen performance style – MOSTLY SHOUTING – pretty much unwatchable; every directorial decision was both literal minded and boring. I stayed until the interval (1hr30). Colleagues tell me things did not improve in the final hour.

I read the Wikipedia summary of the novel afterwards (sorry, not read the novel), and concluded that they’d neither given a fair account of more than half the book, nor had they replaced it with or adapted it into something better, or indeed *anything good at all*.

What happens on the stage, if you really need me to justify calling this a theatre review, is that the first-person-narrator shouts his stream-of-consciousness narration at you, from a particularly cramped, scaffolding set, while various characters in appropriate Norwegian period costume periodically come on and interact with him, as he tells us they are doing.

If nothing else, it is a masterclass in how not to do literary adaptations (i.e. to no one’s great surprise, it is *really similar* to lots we have in England).

So, yeah. That. Thanks, but no thanks.