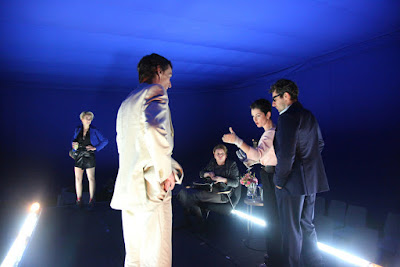 What does one do about Bella Figura? Thomas Ostermeier actually commissioned a play by Yasmina Reza. I mean, WHAT? Was it an amusingly kitsch gesture? (Well, yes, but...) Was it his attempt to get everyone to stop taking the Schaubühne so damn seriously the whole time? (Apparently.) In the event, I think I’m right in saying that once he’d commissioned *something* by Reza, Ostermeier was kind of hamstrung by having to stage the result, and the result wasn’t very good. (Even by the lamentably low standards of Y.R.)

Anyway, this production is by Hrvatsko Narodno Kazalište, Zagreb (National Theatre of Croatia, Zagreb). Here’s the English synopsis of the play from the Maribor Festival Website: “Boris is a successful entrepreneur who intends to enjoy a romantic evening with his mistress Andrea, a single mother and a pharmacy assistant. Boris mentions on the fly that the restaurant was recommended by his wife and that small indiscretion causes serious, even catastrophic consequences. “Andrea is furious and doesn’t want to leave the car. When parking the car in front of the restaurant, Boris hits an older lady. After a while, another couple, Eric and Françoise, accompanied by Françoise’s mother Yvonne, join Boris and Andrea. Soon it becomes clear that the two couples are connected by the accident. To make things even more complicated, Françoise is the best friend of Boris’s wife. When Andrea suggests that they all have dinner together, Boris, who is still in shock after the accident, is unable to reject that dangerous proposal. The tension between Boris and Andrea increases and soon everyone at the table is aware of the nature of their relationship. It also becomes evident that due to bad investments Boris’s company is on the verge of bankruptcy. The carefully preserved bourgeois façade of the successful businessman and a good husband begins to crumble down towards an inevitable implosion.”

I mean, I get why Reza is sort-of popular. On the surface of it, she’s carrying on the tradition of Zola, or Ibsen, or Chekhov, if you believe that what Zola, Ibsen and Chekhov did was write mildly amusing bourgeois problem plays. And, after watching Bella Figura without surtitles, there’s suddenly no real reason to believe that it wasn’t.

What’s more worrying about this production is how reminiscent it is of current popular contemporary British theatre; and beyond that, telling of the bland Schaubühnification of all Europe. Indeed, this was almost exactly like a cheaper knock-off of the Young Vic’s Yerma (except, by not knowing what any of the characters were saying (both theatre-text and social-subtext), you at least stopped wanting them all to die. [And of course, since Reza is a woman, she can write what she likes about women, so it wouldn’t have kicked off about the feminism. Even if, at a rough guess, this play by a woman from 2015 was actually less critical and more enforcing of regressive gender norms than Lorca’s 1930s text. But I guess no one ever claimed that equal representation was also necessarily going to be intelligent representation.]

Director Boris Liješević’s production plays on a small platform and the audience sit around it, heads level with the platform’s edge. It is, btw, the best solution to in-the-round theatre I’ve ever seen – have everyone looking up, so the opposite bank of audience aren’t in your fucking eyeline the whole time. Genius. Beyond this, the whole thing happens within a kind of blue tent [which here has been plonked on the main stage of the National] (design: Numen / For Use and Ivana Jonke). It’s basically exactly the same as Yerma, except without those tiresome mirror/not-mirror walls. The cast seem not-bad. Some of the actors are more realistic-seeming than others. None compelling, but then the stakes in the piece are maybe too low for “compelling”.

Obviously the plot doesn’t matter at all. I sat through the whole thing not knowing it, and don’t suppose having done so it would have improved things. Indeed, I think knowing what was going on might have substantially lessened my enjoyment. Probably there were some passable jokes. There’s an amusing mother-figure... Etc.

My understanding is that the play bombed at the Schaubühne. My fear is that is wouldn’t bomb in England, and that – worse – people will think they’re being European by enjoying it. I’m here to tell you, “European” is a meaningless adjective (beyond meaning “from Europe,” which Bella Figura is); at the same time, it’s a hell of a smokescreen for bullshit sometimes.