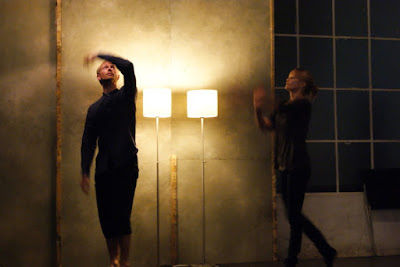 Thank fuck for choreography, frankly. This was, like, the millionth piece I saw at the Borštnikovo festival and – having missed seeing the brilliant Republika Slovenija again because of a timetable clash – the festival was proving *somewhat low on highlights* by this point. [This wasn’t just my opinion, btw. The usual crew of international critics and curators were all looking *a bit grumpy* by Wednesday.] Meanwhile, I was trying to pioneer a new descriptive-not-prescriptive approach to the work, after most of my previous reviews were more tellings offs than reviews. Difficult critical question, that. [See: blogs and trolls, passim.]

I mean, don’t get me wrong, it was interesting – really interesting – to see the work, and to observe possible “national tendencies” (nothing conclusive); however, *at the time* when *the actual shows* are often *very boring to sit through* one’s patience *does begin to fray*. So, an hour of very gentle, very wry, very deadpan, very perfectly realised hipster stand-up-choreography was the unexpected answer to exactly what you’d like to see. As a mode, I guess it’s familiar from people like Ivana Müller and Jerome Bel, or maybe imagine a super-chilled Sleepwalk Collective.

In This is Not a Love Story, the two performers basically stand on stage, ask each other questions, walk about in perfect sync a bit, and occasionally do a couple of steps of *actual dance* (the reactionaries!).

It’s nice at the time. And, I think – outside of a festival context; having less to write about, think about, concentrate on – I bet one could dig right into it, and probably come up with a brilliant Trueman-esque reading of what it’s *really* about. (Probably Matt could have done that here too, maybe I’m just lazy.) But as it was, I just let it wash over me. There’s an amusing bit about whales, for example, where the woman interrogates the man about how much he likes them. He opts for b) (of a–c), which boils down to quite liking them, being happy to watch a documentary about them, perhaps, but maybe not going so far as to set a video recorder so he can watch the programme again. This is the attitude the show gives off about itself too. And the one it gets back in return. In this context, even with added gratitude, it’s hardly the stuff out of which life-changing commitments are made.

I refuse to link this response to the show's title in a punning sign-off, though.