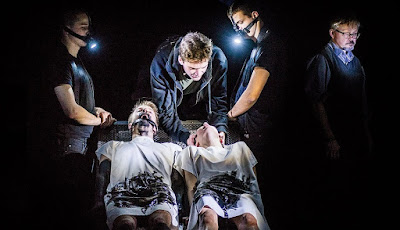 Oskaras Koršunovas is pretty much regarded as Lithuania’s leading middle-aged director. So much so, that no one really talks about any others. I last saw anything by him eight years ago – an astonishing cut-‘n’-paste Hamlet that included a massive mouse wearing a ruff and a funny little dog-devil that capered about the whole time. It was great, and gave me a lot of ideas about how “the Text” gets treated in “Europe”.

A drawback of being a leading director in Lithuania is that you seem to be required to teach at their drama academy. I mean, you can see the logic; “this is our best director, s/he should teach our students.” The problems this appears to cause are two-fold: on one hand, you get a lot of critics complaining that their new, young directors rarely emerge from the distinctive shadows of their teachers. On the other hand, the teaching director ends up putting on premières which have *a lot* of students in them.

For Cleansed, this needn’t be a big problem, of course. It is, after all, a play set in “A university” (although whether it’s meant to have been repurposed by some sinister regime is never made explicit in the text, except by implication – no one injected us with heroin and cut off our hands at Leeds...). And, as far as the main parts are concerned, it isn’t a problem here. The young leads are played with conviction and talent, while the role of Tinker is taken by someone old enough to be their teacher (or an established critic, so very much as I always imagined it). The “problem” (if we’re to call it one) is that there is also a rather large chorus of, well, what looks like *all the other students from Vilnius Drama Academy Class of 2016*. Dressed a bit like the extras from This Corrosion, it have the unfortunate effect of making large swathes of this Cleansed look like a budget cover version of Duran Duran’s Wild Boys video.

There another problem, of course, and that’s Katie Mitchell’s Cleansed (for other colleagues it was Warlikowski’s Cleansed from 2004/5). I suspect that’s going to be a problem for me for quite some time, though. What do you do with a new production of a play that, while probably *fine* on its own merits, doesn’t even begin to hold a candle to another production you saw only six months or so earlier. Comparison is inevitable, you even watch the new production through remembered images of the previous one. And find the new one either lacking or entirely absent.

In a funny way, Koršunovas’s Cleansed (Apvalytieji) is much more how I always imagined Cleansed would look. Black walls covered in chalky graffiti; no real data in the set about where it’s set; instead of literal violence, it has a bucket of symbolic black sludgy blood which Tinker takes out with his hands and smears on his victims. Or else they are already dripping with the stuff and discovered pre-mutilated. It makes for a much easier watch. But after Mitchell’s, you kinda don’t want it to be an easy watch. There’s no horror or tension any more. And, much though the text remains (disappointingly?) intact, there’s only so far it can go to make you think or feel anything while the cast are so manifestly *doing theatre*. Yes; I’m surprised by this as a reaction for me to have as well.

Elsewhere, one does miss a feminist director, when it comes to the sequences of Tinker watching his shadowy coin-op peepshow lady-friend. Here she’s two rather gratuitous pvc-clad types who look like they’ve just escaped from a heavy metal video from the eighties. I guess that too is how it reads. I was just surprised, especially given his Hamlet, at just how direct-from-the-page and uninterrogated every image seemed to be. But then, along with this Cleansed, Koršunovas’s students were also presenting another graduation piece and a work-in-progress at Sirenos; so in stark contrast to the Hamlet which had been 12 months in the making (if I remember rightly), this Cleansed seemed to have come pretty much from a production line of training work. As such, it was every bit as inspiring as can be expected.

There were good things about it, though. The relationship between Graham and Grace was sufficiently different from the Mitchell version to be interesting, and Koršunovas’s Tinker, played by (either Darius Meškauskas or Gediminas Rimeika, who is a dead-ringer for Shaun Dooley (you’d know him if you saw him)) was, I thought, all the more believable for being a quiet, middle-aged torturer in the Lives of Others mould.

Ultimately, though, I was left unshaken and unstirred by this vision of Kane’s play. Of course there are any number of reasons this might be. Surtitles rarely serve to draw one further into the world of the play, the slightly OTT chorus was more alienating than involving (and not in a good, Brechtian way), and there was the massive, massive shadow of the Mitchell version looming over everything.

I will say, it’s fascinating that *at the time* I had quite a hard time accepting the Mitchell reading of Cleansed (I saw a rehearsal before I saw the finished product, and had surprised myself then at what prescriptive ideas I had about the play, to the extent that I was glad to have been prepared for the things that I’d imagined differently), but now it has replaced whatever else I thought I knew about the play with its own ideas. And part of me thinks that is the mark of a truly great production. It’s something that at once challenges what you thought you knew about a text beforehand, and one that then takes such complete, almost-totalitarian control of your imagination, that lesser readings crumble into nothingness. 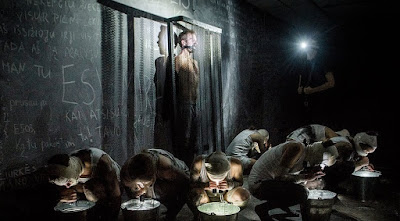