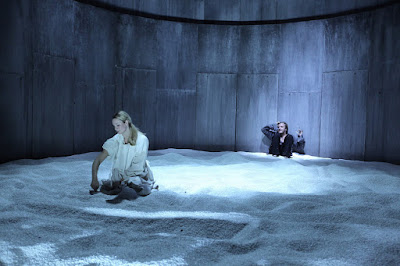 Nah. I got nothing for you with this one. It is one of the most excruciatingly boring things I have ever sat through in my life. I quite liked the set (a dual-level grey concrete cyclorama), but even for someone who loves grey concrete, in this context it really didn’t help.

Actually, that’s a lie, it was quite textured; I spent quite a lot of time looking at it, admiring how it had been weathered, wondering what material it was actually made out of, and how much a set like that would cost. Or weigh. And whether it would be more interesting if it wasn’t such a small cyclorama. I wondered about how it would work if it was flat instead of curved. In fact, I think I thought more about the grey back wall of the set and spent more time looking at it and enjoying its visual properties than I did about any of the people wandering about in front of it speaking.

I think this is another of those shows where they’d thrown out the original text and replaced it with some other text. Which, as an approach, I find terrific and exciting. On principle. You don’t especially need to see Ibsen’s words translated into Slovenian and then surtitled in English to enjoy Hitler’s favourite play; I’m just as happy to see what someone else wants to bring to the table. In this instance, what they brought to the table, however, was just a lot of undergraduate musing on the nature of individuality (on which subject I got more from one page of the new Lehmann than hours of this).

It’s striking, writing this back in England the day after the moronic Emma Rice storm, that even this most plodding and pedestrian of Slovenian productions contained more revolutionary ideas than anything discussed or proposed yesterday. I mean, as far as I understand it, they did take the entire text and plot of Ibsen’s play and bin it. And still called the production Peer Gynt, without apology. Sure, the replacement contents and staging weren’t super *in this instance*, but the principle remains energising. [There’s a chance that they *didn’t* bin Ibsen’s text, of course, and just did a production of it that was so stultifyingly dull, you couldn’t even recognise it – although, in a way, this is maybe the most radical path of all... :-) ]