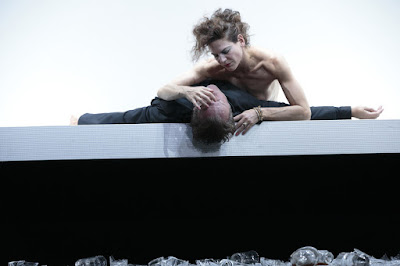 In comparison to the week I’d been having thus far, this Who’s Afraid... was at least a polite, well-managed, nice-to-look-at, and inoffensive. No one blacked-up; no one commented on any pressing contemporary issue; what toplessness/near-nudity there was was so tasteful and normal as to ordinarily escape comment; no one *tried* to outrage me or bore me. And of course, like a pervert with Stockholm Syndrome, I immediately missed it. How predictable and safe it all was.

In ordinary terms, Martin Kušej’s production, from the Residenztheater, Munich, is – well – ordinary. Ordinary German, so – sure – the stage was a wide white narrow platform and wall suspended in a black void over a stage floor covered in shattered glass – glass which is added to, across the course of the play, as characters throw glass after glass out of their world and out onto the stage.

And the performances were good too. I wasn’t riveted by any means, but you could see that they were performances of style and quality. Even if I wasn’t going for the style, and was being left cold by the quality. They really resembled pretty much exactly what you’d expect English actors to do in the same play, but with less attempt to be funny or trying to make the audience like them. (With the simple result that we didn’t.)

However, the big problem here, as with Cleansed, is that I’m at a massive disadvantage with Who’s Afraid of Virginia Woolf. Except, whereas with Cleansed I saw the imagination-haunting production this year, with ...Woolf, I saw it in 2001. So, yes, Khalid Abdalla’s Cambridge University ADC production (starring then students Rebecca Hall and Cressida Trew) still remains definitive* for me. It didn’t hurt that that production opened the week after 9/11 and contained the line “no one ever attacked New York” which dropped silence onto an already silent room like you only hear happen maybe once a decade. But even without that sudden, echoing topicality, that production had a fineness, an energy and an assurance that means that I could sit 1,001.7 miles from where first I saw it, thirteen years later, and remember precise positions, movements and inflections, as well as the overall emotional resonance (I mean, it is probably one of the ten most memorable things I’ve ever seen in my life, so...)

Here, the resonances play very differently. The talk of Science professor Nick being involved in some sort of post-Nazi eugenics reads very differently when he’s saying it in German, for example. And I am also a lot older now. Where once I saw George and Martha as some terrible warning about adult relationships, I’ve maybe got a bit more of a nuanced appreciation of them as a pair, now. Perhaps they’re not *just* trapped in some sort of Beckettian alcoholic hell, perhaps they’re also not pissing about or being fatalistic when they talk about loving each other. Perhaps they’re just doing what they need to do to get on with things. There’s a very real sense in which the entire play can be read not as a glimpse into George and Martha’s unremitting personal hell, but simply as the performance of their self-medication and the effective coping strategies that love might entail.

Indeed, without a production bringing in all the bells and whistles of emotional devastation, the audience is afforded the opportunity to sit back and coolly reflect on what Albee has written, how it functions, and what he might be trying to say with it. What I was most interested by, in this respect, what how much it reminded me of the mid-career work of Harold Pinter, albeit set in a more recognisable world, with more understandable characters. But the creeping strangeness of George and Martha’s games with their guests has a dramaturgy all of its own, which goes way beyond the naturalistic ramblings of two childless alcoholics. Albee’s titles for each act are projected on the wall in the blackout which precedes it – in lurid letters for much too long – which on one level felt like an amusing sabotage of Albee’s apparent fondness for insisting that the letter of his script be followed (it isn’t here, it’s been cut to bits – there’s a chance it’s a staging of the film script?) but also points up the overall structure he has in mind.

So, yes. As always, when watching one performance superimposed over another, a strange, inconclusive experience in terms of observing the production at hand; but a fascinating experience of a play over decades, and across cultures. 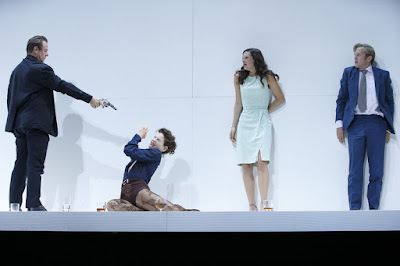 *No, of course I don’t mean “definitive” really.  I just loved it, and still remembered and thought about that production through the many stillnesses and spaces in this one.