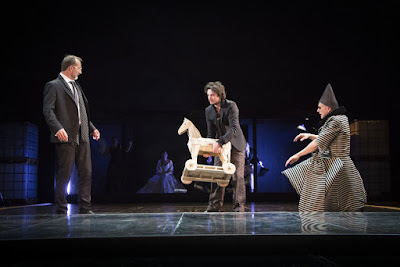 Blimey. Have you ever seen Jean Giradoux’s 1938 play Ondine? It’s actually quite funny and quite good. I admit I am also massively relieved to discover that it is from 1938, and so all the (text) things I wondered about a bit while watching this production probably were deliberately ironic and/or arch (as I hoped/suspected), rather than just clanging awfulness from the C19th, or something.

The plot is based on a C19th German novel, which itself is based on a medieval German fairy tale. One that’s pretty much exactly the same as The Little Mermaid. As such, *obviously* the entire thing is a clanging mess of chauvinist gender essentialism, but I’m choosing to believe that Giradoux knew what he was doing when adapting it. Indeed, if anything, it’s Janusz Kica’s staging that gets in the way of the C21st here. That is to say, the betrothed of ridiculous knight Hans von Wittenstein (Nejc Cijan Garlatti), Bertha (Urška Taufer), appears throughout wearing a tight, black, see-through dress, while transformed-fish-lady Ondine (Arna Hadžialjević) wears a series of light, wafty chiffon dresses which are also *somewhat see-through*. So, yeah, the costuming looks like it’s come out of the bad-old-days of the UK’s post-censorship, pre-women’s lib. Mainstream (think: a racier theatrical version of Pan’s People or something) ((days from which we’re yet to equitably emerge, if the work of Telegraph critic Dominic Cavendish it anything to go by)).

As a result of having seen ...Goga, and more so of having seen ...Molière... previously, I guess I was at the end of my tether for crap being chucked at women on stage. I mean, seriously. It’s the 21st century. Can we stop with the objectification already? (This also applies to UK. I’m not saying Slovenia’s record is significantly worse, although directors might be a bit more used to their decisions going unremarked here...)

Aside from that, it’s a weirdly enjoyable show [yes, sometimes when watching a play, I choose to blot out questionable costuming decisions at the time when I've got 2hrs30 of a play to deal with]. The (English) surtitles were a rather witty and enjoyable translation of the play, I’m not entirely sure how well they related to the Slovenian translation of this French play. I think I got to laugh at more jokes than the native audience, for example. Although maybe that’s just a cultural thing [the English (myself included) do tend to laugh first and think later]. Although the performances did seem to support the comic reading of the scenes where that was relevant (the play itself really switches genres from Wildean humour, to, well, Wildean sentimental pathos really). It’s a very broad, mainstream play, but one that feels entirely tailored to the theatre. It’s got a whole play-within-a-play structure, which seems to emanate from the original text – a text that here *seems* (to me) to have been pretty much followed to the letter (albeit in stylised-modern costumes, and on a fairly 1980s German opera set).

So, yes. Not much to say about it beyond that, really. Quite an enjoyable play, especially if you want to feel like you’ve spent an evening at the theatre in the C19th (the Old Hall of Slovenian National Theatre, Maribor adds to this sensation with its Austro-Hungarian chocolate box auditorium). Basically, I think the play’s totally revive-able, even if I suspect that Katie Mitchell (for e.g.) would probably have to do something pretty severe to it, before she thought it was worth touching. I dunno. What do we do when the whole of history and art up to and including this point in time is just really sexist (and racist)?   I guess binning history and not being sentimental about old plays is probably the only real way forward...