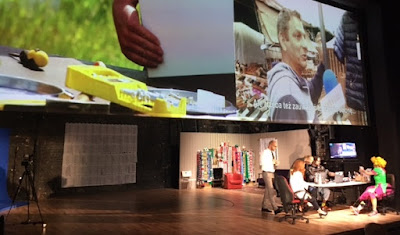 Elfriede Jelinek is a remarkable phenomenon. Famously housebound by agoraphobia in Austria, she is arguably the most successful – almost certainly the most highly-regarded – writer-for-theatre in the German-speaking world. Perhaps in Europe. She’s won a Nobel Prize for Christ’s sake. Literary and postmodern, her texts are dense patchworks of media broadcasts, theory, stream-of-conscious, paragraph upon paragraph of poetry; unbroken often even by line-attribution or designated speaker. To look at it on the page is to look at a monologue, or even a novel. And yet, this is rarely what seems to be being presented on stage by directors rising to the sheer challenge of her writing; to the absolute impossibility of staging it “literally”.

Reading the vast, visceral text for Wut (Polish: Wściekłość; English Rage or Fury), I think I might have finally got *somewhere* with it. Of course, where I got with it on paper is an experience entirely divorced from seeing it live last Saturday in (unsurtitled) Polish, in the Polish national première production of the text [world première by Nicholas Stemann in April in Munich, now also running in Hamburg, in a production by Sebastian Nübling, in a mash-up with a new Simon Stephens text]. The piece was apparently inspired by the Charlie Hebdo/Hypercacher kosher Superette massacres in Paris, January 2015, but the text seems to spill out from that starting point to a kind of symposium on/of Europe, somehow later hopping between these sort-of mythic version of European politicians (maybe), and widening the scope of the enquiry out from the murderous rampage in Paris to consideration of the Greek financial crisis, and the burgeoning spread of far-right parties/politicians.jelinek, I should say, doesn’t really do “accessible” or “clear-cut” or “thesis drama”.

Maja Kleczewska’s production guts Jelinek’s Rage in the first half and a second part supplements it with extracts from Kleist’s Penthesilea, Aeschylus(?)’s Prometheus and Euripides’s The Bacchae (all still in Polish, so none of this verbal information was registering as such at the time of watching, although being subsequently appraised of these facts, it didn’t not make sense...)

In terms of local social and political context: I was last at Teatr Powszechny in January for Barbara Wysocka’s production of Julius Caesar [which went on to win the(/a?) Golden Yorick at this year’s Gdansk Shakespeare Festival]. In that review I noted the near-weekly protests against Poland’s ruling far-right Law and Justice Party, Now almost a year into their term and nothing has changed. On Thursday there were massive protests against the party’s plans to make abortion effectively illegal in Poland. Meanwhile, the far-right party has rallies in its support and nationalist thugs continue to attack “migrants” and “refugees” (or anyone with dark skin they can find in Poland). The Law and Justice Party is as implacably opposed to admitting refugees from the Middle East and Africa as the current UK government. Wściekłość isn’t directly concerned with Poland, but clearly its concerns resonate throughout the country’s politics, not least because the play’s “originating incident” (the kosher upermarket and Charlie Hebdo murders) was probably also the final shot in the arm needed by Poland’s nationalists to amp up their fear and loathing.

I say “isn’t really registering at a verbal level”. What there is instead, however, is an almost vicious amount of visual information pouring frm the stage. I have no idea how someone able to process both verbal and visual information would even begin to process or reconcile it. I say this admiringly. The piece starts out as if in a pair (or more) of television studios (upstage left and right), with a kind of editors desk downstage right. On the (our) upstage left is a blue-screen newsroom kind of set-up, and upstage right is a kind of chat-show faux living room set-up. There are a pair of massive screens dominating the top half of the front of theatre’s proscenium arch. AND THEN, the auditorium itself has been re-made so that only two rows of the normal seating remain in place. Between the stage and the front row of audience, seats have been cleared, and real grass/turf has been laid, surrounding a kind of 5ft deep moat along the front of the stage. The rest of the audience is seated on a kind of temporary raked rostrum, built several above the regular auditorium.

And then there’s what happens on this mad set-up. One *could* generalise and call it “familiar European messy theatre”, and, yes, there might be *some tropes* which are familiar here. But no more so than the continual tropes of naturalism that we’re more used to in England. Similarly, the diversity of the cast and their costuming – for much of the first half, a drag queen totters about the stage in high heels and a wipe-clean PVC dress. A young blonde woman wearing a nominally skimpy outfit totters through the audience. Another blonde actress applies black greasepaint to her face. Muscular young men wear vests. And – most surprisingly for Poland – there’s an older black performer, who talks to the camera, or, in one section, just stares into it for the longest time while other performers move about and talk around him. The screens also show footage from Polish news channels, and presumably the internet. There is horrible footage of the aftermath of massacres, of violent improvised executions... I assume they’re real, rather than specially filmed for the performance or from movies. It’s striking how unreal real executions look. How not-life-like the blood is. Not being especially gore-friendly, I don’t watch these bits avidly. They are, however, hard to avoid – projected behind the now blackface-d newsreader... Then a statue of the crucified Christ is dragged onto the stage, and ends up dumped, unceremoniously into the moat, which is now standing in as the Mediterranean, with Christ as so many dead asylum seekers. The names of (every?) refugee who has died in this crossing are printed on endless sheets of A4. They are on the back wall of the stage. They are read out. They are dropped, sheet by sheet, into this Mediterranean Christ pond. I still have no idea to which bits of the text these things relate; or rather, at which points in the text these things occur. They *relate* because they are all of the same world, and – powerfully – we get a very strong sense of the simultaneity of things in the world. The impossibility of reconciling a weird Polish version of The Bachelorette (I believe it’s called?) with the footage of riots or executions and of the deaths of Syrians and Congolais in the Mediterranean with the lives of Poles in Poland.

Now, the eagle-eyed amongst you will have noticed the sentence about a white actress essentially painting her face black – perhaps to symbolise a “foreign” “Other”. And I suppose I should register the traditional Western, former-slave-trading/owning-country telling off about how this is no longer acceptable in any way at all in any country at all. Personally, though, I’d rather leave it to the black actor and the director or performer or designer to work out whether it’s on or not. Western privilege is a thing too, and I’m obviously the whitest person ever, so it’s hardly like I can register any *personal* offence. It would be crass in England, but Poland isn’t England, and doesn’t have England’s history, or its population, so I’m just going to say I noticed, I was aware, Western-ly uncomfortable about it (and not especially in a good way), but at the same time, feel weirdly as uncomfortable acting the censor [written, believe it or not, before recent blog comments]. Does that make sense?

(or, similarly, in the second half, where a scantily clad woman hung off half a cow’s worth of rotting carcass – something else that we’d never see on stage in UK because of our freedom not to offend, one idly notes – I'd be reminding readers that this is a feminist director and the most feminist writer, but that maybe they have a different take on how images read on stage in Poland...).

But, yes, I think you’d possibly have to understand the situation in Polish Theatre at the moment to really get my discomfort. In short, the Law and Justice Party is increasingly (even in the few days it’s taken me to write this review) operating de facto economic censorship, and is firing artistic directors with which it disagrees and replacing them with those who will put on plays about Pope Jean Paul II. FFS. They’re apparently now threatening a festival too... It’s *really* bad in Poland right now, people.

So, anyway... I think that’s the play. Impossible text. Electric, shocking, frenetic staging.  Blistering stuff, but somehow also tragic in its acknowledgement that even theatre *about* these topics, about any topics perhaps, is horribly limited and muted. Like, what good can it ever even begin to hope to do? Ironically, perhaps its most concrete good is the offence that talking about such subjects apparently causes to the anti-civil-liberties, anti-freedom-of-speech right-wing parties, who are very much in the ascendant in Europe; a right wing who behave “like Soviet-era censors,” one might say. 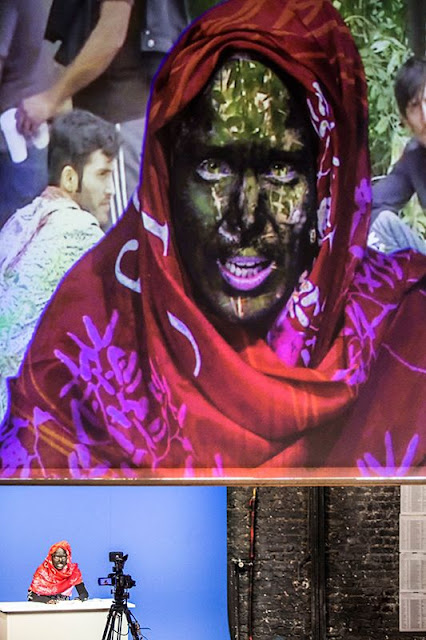