“The Death of the West” 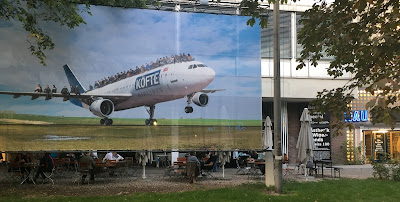 At the (Re)fresh Young Critics Conference in Vilnius, Lithuania, in the course of one of the free discussions which I was moderating, one of the young critics said something that left me absolutely speechless. I think we were discussing culture or censorship, or some broad, agreeable topic, and this Russian critic came out with something along the lines of:


“Of course, the real crisis facing Europe is The Death of The West...”

They went on to outline that The Death of The West was a phenomenon largely caused by migration from non-European countries, by Islam, by Islam’s War on The West, by Europe’s white, christian population being out-bred by Islamic Migrants. There was even a throwaway remark about how “homosexuals can’t have children – obviously”. And I was stunned. Obviously. It’s not the sort of comment you expect to hear “in a theatrical context”.

Now, as I said in my piece for The Stage yesterday, I don’t believe theatre is “relentlessly left-wing,” and nor do I expect it to be. However, I would be pretty surprised to hear anyone on the mainstream right-wing (or left-wing) of British politics come out with this either. It’s still not the sort of thing you expect to hear expressed so baldly in any European context. (See also: my piece on Latvian director Alvis Hermanis’s “all terrorists are refugees or their children” outburst from December last year.)

I should admit that I regret that the (very short) remainder of that conversation wasn’t conducted in a more equitable manner. I wish I’d had the presence of mind to actually draw out the critic more on what they meant, how they had arrived at that conclusion, and how they supported their claims. But I didn’t. My bad. My mind went blank, and I had absolutely no idea what you did with someone essentially espousing neo-Nazi ideology in the middle of a discussion of whether postdramatic theatre had had its day, or something.

Of course, the view itself was not new to me. I’ve seen Chris Thorpe’s Confirmation and The Milk of Human Kindness, God knows I've done enough late-night internet-wormhole research of my own too into the far-right. Christ, in my early thirties I even used to knock about with the New Culture Forum “think” tank out of curiosity [so, yes, I’ve had nights out with Douglas Murray and this year’s UKIP candidate for London mayor, Peter Whittle – who, to be fair, are both much better company than you might expect, given their views]. But, yeah. I’d heard it all before.

I am curious, though, given the progress of ideological control in some mainland European countries, and the apparently increasingly febrile atmosphere nationalism here in Britain (which could well ust be a chimera we are being fed by a not disinterested press, fuelled by a hard-core of only a few hundred), how soon it will be before this is a viewpoint that is forced into one end of our Overton Window.

In an op-ed piece in this week’s Stage, Time Out theatre editor Andrzej Lukowski writes:


“I think back to a couple of letters The Stage has published recently – complaining about colour-blind casting, letters that colleagues of mine have haughtily dismissed as the work of elderly cranks – and I wonder if they’re not harbingers of some sort of wider change.
“Obviously, the arts have always been a hotbed of liberal do-gooding [I’m just going to let that go, as it’s clearly a comically-phrased exaggeration], but for the last 19 years the government of the country has been run by people who at least pay lip service to those same values. Now that it isn’t, I worry that things might be about to get interesting.”


Meanwhile, in his editorial from the same issue, Stage editor Alistair Smith concluded:


“Dismissing opinions you don’t agree with out of hand is not the route to greater understanding and progress. As we have learnt to our detriment in the wider political sphere.
“The arts would do well to learn a lesson from Vaizey, and from the events of the last few months, and realise that there is a much wider variety of opinion in the world at large than we see in our theatres or on our Twitter feeds.”


I worry about the implications of this final stanza. Should we in Britain brace ourselves for a flurry of (more) plays catering to the opinion the “The West is under assault from Islam”? That “Britain is a ‘white’ country and should fight to stay that way”? Should we accept intolerance as an opinion, precisely because of our own reverence for tolerance?

It strikes me that rather than simply seeking to accommodate other opinions the reverse is true. We need to work out robust defences of our own positions and promote the things we believe more effectively. The point of having a belief in something isn’t so one can point weakly at it once in a while, as it languishes in the corner like a cake-drunk possum, as if to indicate “that’s my opinion”.

In the face of opposite, wholly incompatible, competing beliefs, The aim isn't to “try to get along”. The point is to win the argument. By having the best argument and by being right. “Well, I accept your point of view, too” isn’t actually much good in the face of what Britain seems to be up against, at the moment. Two opposite things cannot occupy the same space at the same time. For fuck’s sake, if all oncologists did – to draw a none-too-subtle analogy – was to try to arrange peaceful co-existence. Well....  I’m not saying I’m “right” and "the other side are definitely” the cancer. But they do think that; and there’s never any “proof” of a belief. And I’m fucked if I think that “giving some Nazis a fair hearing” is ever going to improve Europe.
[Sure, I think there’s a place for listening to them, and not dehumanising them, and trying to reason with them, but when all that fails, what then?]

Of course, given the way the world seems to be going, I might be outnumbered. Perhaps the majority of Britons really do want to see first the end of immigration, and then the beginning of forced repatriation, and then...

And, perhaps those same people would like to see theatres either closed down, or playing some sort of work that vindicates this course of action. It’s been done before and it could be done again.

The gathering of people in one place “to all feel something together” is not an intrinsically “left wing” or “progressive” thing. Indeed, one of the most compelling reasons that post-war German theatre has been the way it has for so long is precisely because of Hitler’s belief in exactly those virtues. I know left wing critics who deplore any attempt at this sort of conciliatory, inclusive, sharing kind of atmosphere, because they see it as being symptomatic of fascism. This is part of why I find it very easy to argue against the spectral belief that theatre is somehow inherently “left wing”.

So, what should theatre be doing now? As ever, I don’t have answers, only opinions and questions. I have severe doubts about theatre’s ability to change anyone’s mind. I claim people will see things through their own lens, and – potentially – either find their own beliefs affirmed by “work that holds the opposite point of view” (how do we define that? I don’t know) or find their belief in theatre’s prejudice against their viewpoint vindicated, and therefore easily dismissed. Shouldn’t theatre just get on with being theatre? Rather than sacrificing aspects that its artists find intrinsic in order to make it serve some sort of “healing” or “conciliatory”social or press function, might theatre not defend itself more effectively *as art*?  As often in the UK, that the premises of far too many positions of the right have been accepted as the agenda and the accusations against which we should defend ourselves.  We should, as ever, get better at rejecting the premise of the question.


I will end with three contradictory pieces of “art”. The first is Brecht’s poem, Die Lösung (The Solution), which feels so much more disquieting now, and less ironic, than it did in its original context:


After the uprising of the 17th of June
The Secretary of the Writers' Union
Had leaflets distributed in the Stalinallee
Stating that the people
Had forfeited the confidence of the government
And could win it back only
By redoubled efforts. Would it not be easier
In that case for the government
To dissolve the people
And elect another?


The second is the entirely offensive, disquieting, neo-folk anthem The Death of The West, by the band Death in June, who, at the very least, pretend to be Nazis to be provocative. At the very least:


The third is Nicholas Ridout’s conclusion to Theatre & Ethics, that:


“the event of theatre [should be] approached with uncertainty, with a view to the possibility of surprise, challenge or affront... [T]hat theatre [currently, normally] justif[ies] itself in terms of its contribution to an ethical life, might be the very thing that prevents any theatre from meeting such a demand. Theatre’s greatest ethical potential may be found precisely at the moment when theatre abandons ethics.”

["cover photo" shows the poster for the Hebbel-am-Ufer Theatres' autumn season, themed around the refugee crisis, displayed as a banner outside HAU2 in Kreuzberg, Berlin -- I assume they're "being provocative" and/or satirical]
Posted by Andrew Haydon at 11:20