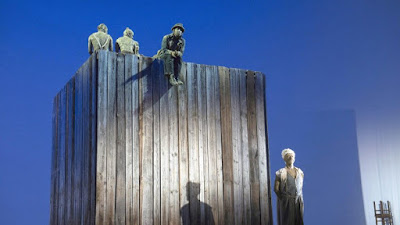 Ever since I first heard of the Gotthold Ephraim Lessing’s 1779 play, Nathan The Wise, [probably getting on for a decade ago when I first started going to Germany,] I’ve been desperate to see it. Largely because I think it is probably the deadest-cert smash-hit for a UK transfer ever. It sounded ludicrously “relevant” then, and is perhaps even more so in today’s climate.

The set-up of the play is as follows: Nathan “The Wise”, a widely-liked Jewish citizen of Jerusalem at the time of the crusades, returns home from some travels to some remarkable news: his house was burnt down, but his daughter survived the fire as she was rescued from the flames by a Knights Templar Crusader whose life happened to have been spared by Saladin because he happened to remind the Islamic commander of his dead brother. Since her rescue, Nathan’s daughter, Recha, has been bedridden by lovesickness for her saviour (!), whom she believes to have been an angel in (religiously inconvenient) human form! She wants to meet him to tell him as much, and thank him for saving her life, but he shyly/proudly/nobly hides himself and she doesn’t know who he is. At the same time, Saladin needs money for a new campaign against the Christians, and the Christians need information about the postions of Saladin’s army. Cue three hours (or so) of Middle Eastern hi-jinks in the Middle Ages!

Now, as far as I’m aware, the play isn’t *intended* purely as a comedy (although – SPOILER WARNING – it is in the Shakespearean sense), there aren’t *many* noticeable deliberate jokes that I remember. That said, much of the script hasn’t perhaps aged perfectly, and so there are maybe more laughs now than there originally were, but much of the tone is certainly warm. In director Andreas Kriegenburg’s production [and, yes, I was SO DELIGHTED it was Kriegenburg, having admired earlier stuff when I first started getting into “German theatre”] this comic element is (surprisingly, to me) highlighted much more. So much so, that by the end, it feels like nothing so much as a rather beautifully made clown version of The Importance of Being Earnest, albeit with class replaced by religion (plot hint).

And, well, it was a delight, frankly. It’s a difficult delight; and, furthermore, I suspect all my German friends, who have to study it in school (think Romeo and Juliet), and have had to endure innumerable productions in their homeland, will be completely non-plussed by this idea. And, despite Lessing’s Enlightenment-era attempts at being even-handed, an *enlightened* document it really isn’t. There is, for example, rather too much surprise at the Jewish character’s exceptional nature in his being a wise and decent bloke, it seems; but at the same time, this surprise is expressed by Christian characters whose own religious perspectives are also being critiqued; so we can perhaps conclude that this is a play that includes anti-Semitic characters, rather than an anti-Semitic play (I mean, it’s already streets ahead of Merchant of Venice, let alone the Jew of Malta). Indeed, there are passages in the play that detail with real compassion the persecution of the Jews by both Muslims and Christians in medieval Jerusalem (depending on which of the latter parties had the upper hand in the conflict at that point).

So there we go. That’s the pitch of the script to the artistic directors of UK theatres. Seriously: get on this play. Commission a banging translation, or get Richard Bean to do a number on it, and you’ve got a de facto bit of International High Culture that you tour as a comedy for pretty much ever, and it’s relevant as all anything. Big opportunities for multicultural cast in a bona-fide European Classic. Who could ask for more?

Now, about *this production*...

What I found remarkable about Kriegenburg’s production is how open, clear and accessible I found it. (This is NOT why I go to German theatre!) But how, at the same time, that clarity went hand in hand with both moments of real beauty and pathos, and also an almost clown-like knockabout aesthetic. For all of this to co-exist peacefully felt like a a really special achievement.

The design of the thing (stage – Harald Thor, costumes – Andrea Schraad) is a rough wooden box, like those cubes by Scutt or Devlin that we had a few years back. It’s marooned before a white cyclorama, and was lit about as beautifully as anything I’ve ever seen at the start. The performers come on and are dressed in rough underclothes, and ARE ALL COMPLETELY COVERED IN MUD FROM HEAD TO TOE. Now, on one level, we *might* worry that this is an all white cast doing something akin to “blacking up”. I’d argue it’s not. It *might* be a nod to the area, but it’s so inherently, intrinsically theatrical, that I challenge anyone to be even remotely offended by it. In fact, the mud is/was a great leveller. The cast members could have been any ethnicity playing any ethnicity. And the clay-y mud was also utilised throughout not only as a (non-) comment on skin colours, but also as a kind of messy, unfixed stage element that continually came off on everything. The walls of the revolving wooden cube were caked in the stuff at person-height. And at one point, someone just threw a lump of their own skin-clay in someone else’s face. Which was very funny indeed. I’m tempted to suggest that the UK should adopt ALL PERFORMERS COVERED IN MUD as a default for EVERYTHING for at least a decade.

In this particular play, though, the removal of any naturalistic *means* also preserved the integrity of the plot beautifully. As someone who’d never seen it before, and whose reading of the synopsis was long enough ago to have forgotten the finer points of the ending, it also meant I experienced the whole *as new* – probably harder if cast directly to type. Instead, characters were designated with crude religious dress (all muddy and improvised-looking).

But, yes, beyond all this – what I will call “technical accomplishment” – most of all, and this really took me by surprise, there was this kind of *joy* about it all. A gleefulness at performing, deliberate glee projected outwards to the audience, but also radiating somehow from within even this complicated canonical text. I mean, I really don’t think all Lessing’s lessons in Nathan The Wise could be held up as especially wise today, although the allegorical tale Nathan tells about which of Judaism, Christianity and Islam is the One True Faith could maybe do with being more widely known outside Germany.

So, yes. I loved it. I would even say *transfer this very production* but it could maybe do with losing ten or twenty minutes for a mainstream UK audience. But even so, I think people could really value it. More so even than a “proper,” historical costumes version that would have been the default in the UK just over a decade ago, or the “modern dress-plus” version that it might currently receive. Here we see an attempt on a classic, which has been done to death, *really* reaching for something that still feels fresh and original. And, in part, it’s this necessity of invention that makes it feel both vital and also, perversely, is what establishes/cements its value as a classic. 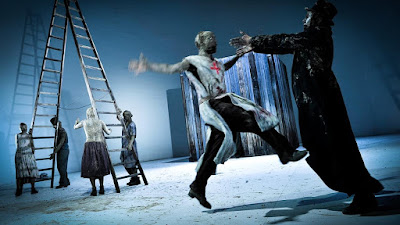