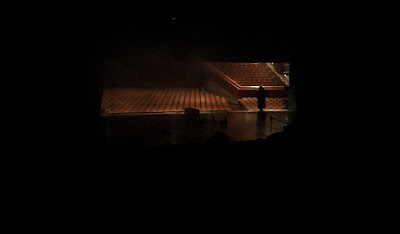 It turns out that my last day at  Borštnikovo contained almost all the shows that I actually liked. About half an hour after the revelatory Three Sisters there was the fascinating Metamorphoses 3º: Retorika.

Now, my response to this piece was slightly (unfairly) coloured by some critic-colleagues all complaining that it was “utter bullshit” (or words to that effect) afterwards. As such, rather than getting to just write a nice review saying I liked it, I feel I have to justify my position more, and perhaps even acknowledge that I was letting a few things go unchallenged because it was enjoyable. [And, yes, I could instead write my original review and cover those aspects, but I’d rather record that this is the process.]

What Metamorphoses 3º: Retorika is, is a kind of light and sound installation, for the most part more operated than performed by its human components. They do get to perform as people saying words into microphones too, but for the most part, they’re not “characters” I don’t think.

The first part of the piece – for almost twenty minutes, at a guess – is actually a film. It talks about a Slovenian woman who trained as a lawyer and dressed as a man in the 1920s, ‘30s, ‘40s and beyond. It was quite interesting as a film in itself, but even more interesting for having been shown *as cinema* during a piece of theatre (never seen that before. Tick). What follows was characterised by one of my dissenting colleagues as “someone who’s never had all that stuff to play with before in a theatre” – vast piles of mattresses were stacked, restacked, thrown around the stage, and thrown off the stage. Smoke machines billowed. Fake Marshall stack amps were moved around the stage, used to play different soundtracks, and ultimately stacked in a corner. A massive bust (Karl Marx?), was toppled from its pillar and smasked across the stage. Dozens of microphones were positioned and re-positioned. Narrative spilled out, analysis spilled out. Beethoven’s European Anthem (as it now is) played over and over, but never all the way through. Lights shone down in thick beams, traced through the smoke, like columns from the ceiling. Other lights cast long shadows across the stage.

Then, at the end, the actress from the film came on, sang an aria, and exited by the giant iron safety curtain rising to reveal the vast main auditorium of the Slovenian National Theatre’s largest space (imagine basically watching all this sitting at the back of the Olivier stage, albeit one that’s about twice as deep).

I KNOW, I KNOW. That’s just a list of stuff. It just looked nice. It was (too?) episodic (even for me). The fragments of text and where they and the images pointed to was nothing terribly new or original. And many of the images weren’t perhaps in themselves all that new or original either.

BUT. I honestly don’t think *everything* has to be (or even can be) *new*, Every Single Effing Time. I know it’s a walking definition of reactionary, but sometimes it’s genuinely quite nice to see something that amounts to a Visual Theatre’s Greatest Hits album. That the fragments of text didn’t fully add up doesn’t mean that they weren’t offering *anything*. There was feminism, history, the EU, neoliberalism, the clash of ideologies, and etc... I mean, Christ, I hate to harp on about it, but even in this imperfectly realised if hugely enjoyable piece there was a fuck of a lot more going on than in *so much* mainstream UK New Writing (even if less by way of an easy take-home).

To be honest, though, the thing this most resembled was – on some very abstract plain – recent gigs by the Sisters of Mercy. It’s mostly lights and smoke; the material is kinda sludge; but out of sentimental affection for an aesthetic, it’s still somehow quite nice that it’s there. And I ge nuinely enjoy it. As I’ve said many times before, there’s not much you can do about taste, really. [Except lie.] It’s like being taken hostage...