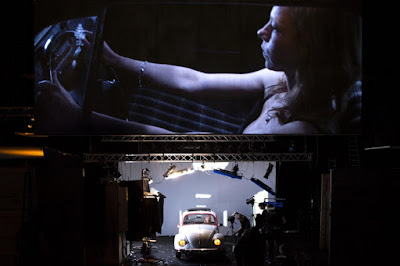 So, this is SO FASCINATING.

From what I’ve read, it seems that Katie Mitchell’s production of Elfriede Jelinek’s (newest?) text, Schatten (Eurydike sagt) [Shadows (Eurydice says)] hasn’t been particularly warmly received by the Germans. Their main problem? That Mitchell hasn’t treated Jelinek’s text in the way that they’re used to.

I say “fascinating”; really it’s more like hilarious. Long-term readers of this blog would probably admit that if there are two constants in my criticism they are admiration for Germany’s theatre culture and of the work of British director Katie Mitchell (see yesterday’s review of the Lithuanian Cleansed, for e.g.). And, as we know, Mitchell’s own narrative of her career trajectory has this period of “exile” in Germany, where – sidelined by the critical culture in the UK – she found a properly intelligent, appreciative reception in Deutschland. At the same time, via an entirely different set of circumstances, I moved toward the (mainstream) German take on How Theatre Works, attracted by its apparently healthy disrespect for How Plays *Ought* To Be Done (or indeed, How Plays Should Be Written). Admittedly, this was always a response to a rather broad understanding of both the UK and DE positions, but that’s how it was at the time. I loved the idea that a play was one consciousness, but that a director was required to actively be another, and that the staging could be a conflict between the two.

And now, part of the German issue with Shadows... appears to be that Mitchell has performed the *wrong sort of directorial intervention* on Jelinek’s text. Saying I’m amused doesn’t even begin to cover it. I mean, I do understand that there are also other criticisms, and I perhaps understand the German critics’ perplexity at why anyone would want to try to reintroduce realism or naturalism onto their stages. But I would also suggest that believing that’s all that’s happened here is *a massive category error*.

Mitchell’s production is one of her “camera shows”. That is to say (and, as Nachtkritik’s Michael Wolf rather snottily puts it – “Anyone who knows their language of form, can safely skip the following paragraph”), what happens is a small army of actors, camerapersons, stage-hands, and a voiceover artist make and live-project a “film” on the stage. As Wolf also says, if you’ve never seen it before, it is a genuinely stunning effect. Mitchell has now made about ten (?) of these shows, however, and Wolf seems a bit impatient, suggesting that the novelty has worn off. I think that’s a *slightly* lazy way of looking at it. Obviously there are superficial similarities between this one and Forbidden Zone, or Wunschloses Ungluck or Reise Durch Die Nacht, et al. However, there are also differences. And it’s not like it’s Mitchell’s default or only approach to theatre. Neither Ophelias zimmer nor Atmen at the Schaubühne, much less Cleansed in London or (any?) of her operas had any cameras anywhere near them, for example. So I think we might extend the courtesy of trusting that she’s done it for a reason when she’s done it at all. (Similarly, we might be less cynical about it as a mode, if we’re going to accept – say – Nicholas Stemmann trotting out all the same tropes every time he does *anything*.)

Jelinek’s text – as tends to be the case – is essentially a vicious screed-of-consciousness. If you imagine Virginia Woolf waking up reincarnated as a Marxist Courtney Love you might get some idea. Here she has imagined herself inside a kind of modern Eurydice – a writer married to a rock star. As with Wut, and Die Schutzbefohlene (x2), or Das Werk (et al) before it, there is literally nothing in the text that suggests how it should (or shouldn’t) be staged.

[There is, however, the likelihood, that all the German critics will have read the text before seeing it. Whereas I didn’t read it beforehand, and didn’t particularly concentrate on the German while watching either, and then read (Google-translate’s Ok-but-hardly-poetry stab at) the text afterwards... Obviously this isn’t perfect, but it does seem to mean that I liked the production more than anyone else...]

And it’s fair to say, there is a surprising disconnect between how you’d read the text in the first instance, and what’s now on stage at the Schaubühne. Mitchell (and her video scenographer, and Alice Birch – credited with “Text” – possibly meaning having written the film story, possibly script editor, I don’t know) has made a pretty straighforward narrative film of the story of Eurydice, transposed into a modern idiom, with much of the text existing superimposed onto the visuals by means of a visible voice-over artist in a soundproof booth smoothly reading the jagged text over the polished visuals. I do get why the Germans are surprised, but I can’t say I minded especially. It’s a perfectly ok film (though admittedly not perhaps Mitchell’s *best* by a long way), and, ironically, the disconnect between form and content feels amusingly German – just in a way that the Germans seem to disagree with.

Perhaps my favourite critique of the piece comes from Süddeutsche Zeitung’s Mounia Meiborg’s argument that the feminism of the piece is almost kitschily retro. That the gender relations in the visuals are not gender relations that she recognises in modern Germany. And that the piece even perhaps betrays women further: “The camera feeds on Jule Böwe [Eurydice] lying in black negligee on the floor and staring into the distance... And Katie Mitchell, who sees herself as a feminist, confirms an old patriarchal law: the suffering woman is still the best.”

Now this is fascinating. Obviously I can see the converse view as well; that if we can’t name and depict problems of gender-relations in theatre, then we are a) ignoring them, b) endorsing them, and c) censoring ourselves. On the other hand, there’s the argument articulated by Doon Mackichan and/or Maddy Costa that reproducing images of suffering women, we naturalise them, immunise ourselves to them, give people ideas, and are even making that violence ourselves on the stage.

I sit uncomfortably on the fence here, because I think both points of view are both true and untrue, pretty much equally. Perhaps *intent* is the key here. I think we can at least allow that the piece has been made in good faith, rather than with the aim of setting the Women’s Movement back fifty years, and titillating men into the bargain.

So then we come back to the question of whether the form itself is reactionary. I’ve gradually been coming round to the uncomfortable (for me) realisation that, much though I’d like to believe in the primacy of my own political reality, the inconvenient existence of other countries and other theatre cultures means that that enterprise is pretty much doomed. There’s nothing *inherently* more left-wing about using the stage for metaphor, or right-wing about using it for verbatim etc. etc. I might have a few beliefs about what’s best, and might tie them to my ideas about what politics are best, but I think any definitive links are impossible to prove beyond doubt. There’ll always be another country/culture doing the opposite thing to achieve the same result. It seems largely to be a matter of precedent and reaction against precedent. To believe otherwise it to argue for the objective primacy of your country’s theatre culture over another’s, and I don’t think anyone with leftist views is going to be keen to do that. So...

So, where does that leave us? Well, it’s a Katie Mitchell camera show (with some properly excellent music by Melanie Wilson – I wish they’d release a CD/MP3s of both this AND Cleansed), with a visual narrative about a woman being bitten by a snake, dying in hospital, being taken into the underworld – a concrete Lubyanka, 99 storeys below the earth – being pursued by her husband Orpheus (whose singing to the elevator to gain admission is an amusing nod to the original), who wants her back in the land of the living. A disinterested, and somewhat amused Hades (scary contact lenses and a rather German way of dressing) seems essentially to be offering her sanctuary – this underworld seems more like an existential writer’s retreat, with no laptops, only boxes of paper and a nice fountain pen.

I *think* this ties up to some meditation on Eurydice refusing to be His (Orpheus’s) shadow, but instead a shadow of herself in some way. It’s possibly more amusing and less absolutist than detractors are giving credit for, although, given the somewhat bleak mise-en-scene, maybe it’s me at fault detecting a wry smile here.

If we’re interested in things like Like/Dislike, it wasn’t my favourite Katie Mitchell (et al.) show, and – in a bizarre turn of events – it’s not even my favourite Jelinek of the last week or so (probably Poland’s, then Lithuania’s, maybe). But I thought it was *alright*. I’m most interested – annoyingly, given that theatre doesn’t really work this way – to see what (if anything), Mitchell and Birch make of Meiborg’s critique, and whether or not that’ll be something they seek to tackle in subsequent shows.

Still, I’ve been spoilt recently. It’s still streets ahead of most of what’s opened in UK theatres since Edinburgh... 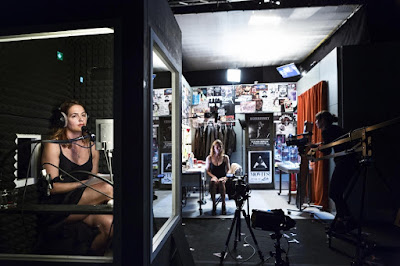