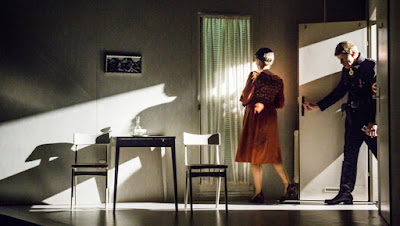 Thomas Bernhard’s Eve of Retirement is a FANTASTIC play. It is toxic and abrasive in ways that I can’t remember any other play that I’ve ever seen being. And it has more to be abrasive about than most. Written in 1979, it is a kind of vicious outpouring of hate about and from Austria’s unadmitted, uninterrogated, unprocessed Nazi past.

It opens with Clara and Vera sitting in their living room. Clara is talking, Vera is sitting in her wheelchair and is described by Clara as deaf and mute. Vera appears to both hear Clara and answer her. It is unclear whether this is really happening, or whether the play is – well – a play. (There is later the apparent option that Vera is “playing a part” – but again, it is ambiguous whether this means actually, or, now *really* deaf and mute in-the-world-of-the-play symbolically in their lives) They are discussing Rudolf Höller (Borut Veselko). It rapidly becomes clear that Höller is an unrepentant former concentration camp commandant who tonight celebrates Himmler’s birthday, an exercise that includes his wearing his full SS uniform.

As with Kroetz’s 1971 play, Wunschkonzert, at the other end of the Festival, there is a certain extent to which the play now feels, in part, like a historical document. It must have felt like dynamite in 1979 when there genuinely were such people, perhaps even sitting next to you in the theatre watching its première.

What is fascinating, depressing, and disturbing, is that in this revival – even with its stylised seventies haircut wigs and wallpaper – it still resonates loud and hard against the growing, ever more loud resurgence of far-right parties across Europe. You sit here, in the middle of Maribor, in the middle of Slovenia, just nestling next to the Austrian border, and you know (even as an Englishman) that there’s no distance that you can put between yourself and these crimes. And the play knows it too. The entire thing, really, is calling out precisely the atmosphere of contemporary post-Brexit Britain, every bit as much as it’s calling out Austria or Germany. I disagree with the theory that historical costumes and/or different countries “let you off the hook”. Indeed, if anything, without wishing to go all Godwin’s Law, if you can appreciate a comparison between where your country is at now and ex-Nazis in Austria, then it’s the exact reverse of feeling “let off the hook”. This is the most urgent and contemporary play I’ve seen all year.

It also helps that Mateja Koležnikz’s production is a kind of perfection. On one hand, a sort of Robert-Wilson-esque barrage of tics and stylised twitching, and at the same time, a clarity and directness of real violence. [Now, I’m told that all her other productions look and behave the same, but a) I’ve never seen one before, b) I don’t mind a director having a style, so at the moment, she gets full credit for what seems to me to be one of the most astonishingly well-realised pieces in Slovenia.] Mojca Kocbek Vimos’s design – a sawn-off room-corner somehow looming off the small (Royal Court-like) SNG stage is also brilliant, complimented perfectly with both Alan Hranitelj’s costumes and Bojan Hudernik’s lighting (mostly a single massive floodlight pointed straight at the room from the right hand side of the stalls – brilliant).

The play doesn’t provide a moving or cathartic resolution. It more dumps a heap of shit into your lap and makes you think about it. It is a play that would fit beautifully – I think – into the new regime Gate Theatre (and, Christ, this production would fit beautifully into HOME, nudge, nudge), but, yes. Possibly I’ve ground some of the edges and nuances off the piece in my enthusiasm, but this is the first Bernhard piece I’ve really *got*, and I now I want everyone to see it. 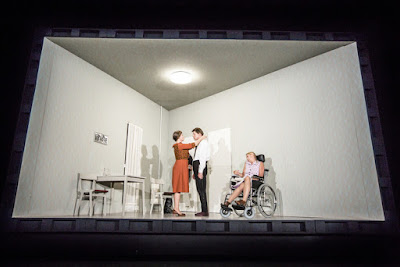