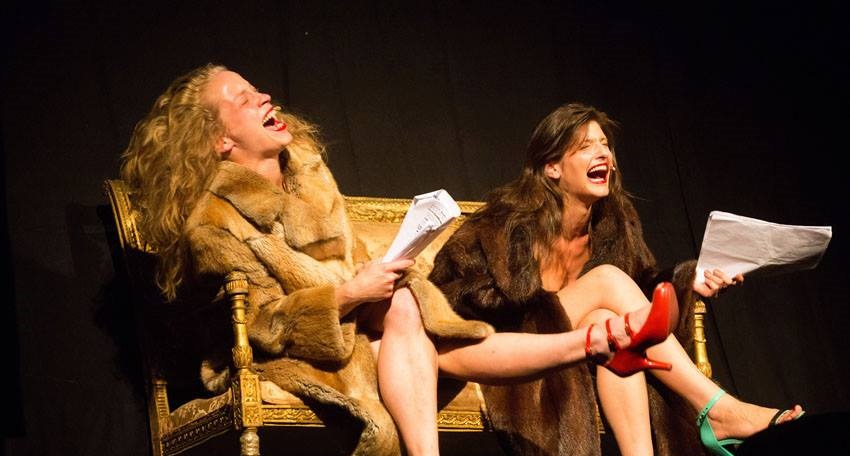 Ok, the Identity.Move! Bazaar wants a bit of explaining/contextualising as an event. And almost certainly doesn’t want “reviewing” in any conventional sense.

On which subject, have you read Meg Vaughan’s (entirely unrelated) review of The Privileged? Christ, it’s clever and good. And totally revolutionises the online theatre review.

Identity.Move! is the name of this 18-moth/two year project that’s taken 24 artists from across the “Eastern European Belt” – from Latvia to Greece, through... as far West as Germany and as far East as Bulgaria (if my geography is right). This Festival is essentially its culmination. And, as an idea for a festival, I think it’s kind of brilliant: a programme of great talks and provocations, a proper range of different shows, and all built around this apparently huge, amorphous R&D project *with no “final” pieces*, more like scratches, showings, interim reports and so on. The sort of thing Chris Goode has been telling us is the future of theatre for years. The artists have meet up and working in their pairs in a series of workshops in Germany(?), Poland and Greece, and now are putting the work in front of each other and small audiences before a final day (today, Sunday, 22nd) of – I guess – feedback.

Interestingly, although no British artists are involved (again! our whole *being an island* deal really needs a rethink, I think), the format for Bazaar, thrashed out by the excellent Polish Theatremaker Wojtek Ziemilski, owes, he told me, a certain amount to Stoke Newington International Airport’s seminal, short-lived, Live Art Speed-Dating nights. And to Forest Fringe. Which, in the midst of all this Eastern European-ness, did, I’ll admit, make me feel a slight sense of national pride: we occasionally have ideas mainland Europeans actually want to nick! Who knew?

As a result, the atmosphere of Studio Alta’s almost entirely brand new “Living Room” space – a large warehouse-y affair with sofas, heating, a mezzanine level and a bunch of side rooms – is one of amiable chaos as festival guests wander around trying to get their bearings and see as man y of the works-in-progress / showings going on. Obviously, with 24 artists ininter-disciplinary pairings, some of the showings are more coherent than others, and some more apt to be written about than others. As such, rather than giving thumb-nail sketches of everything I saw, I’m going to have a stab at describing three pieces in more detail, which between them also somehow seem to summarise/tap into the looming sense of the shape of things to come which has been hanging over both this festival and DunaPart in Budapest.

The first is a piece entitled The Film and the Praxis by Latvians Krišjānis Sants and Andis Geste. It essentially comprises being herded into a small room by two big blokes in miliarty uniform (the artists Sants and Geste themselves, with newly shaved heads), and watching a film while gthe two men stand stock still against the walls.

The film itself shows the pair marching about in the nature, possible some earlier, longer showing of their R&D, and footage of speeding over painted road signs offering words like “Obey” and “Peace”. The grainy, over-exposed footage shatres enough in common with possible home made videos of sickening violence that the whole thing feels faintly threatening throughout, even while the actual content remains entirely benign. I guess having two big uniformed men in the space with you will do that to a thing.

And, oddly, it’s that which perhaps communicates the biggest national/imternational preoccupation of both piece and festival. Apparently Latvia reintroduced compulsory national service three days ago. And the reason is not that they worry about youth discipline or how to massage the unemployment figures, but because there’s an ever more firm belief that before the year’s out they will be at war with Russia. I shit you not. I think we in the UK maybe feel a bit hazy on the details of the whole Ukraine thing, but in former Soviet bloc countries, they really don’t. And in former states of the the Soviet Union, that feeling is amplified a hundredfold. Under everything happening here, there is the fear of a catastrophic war waiting to happen. I imagine Europe in 1914 might have felt rather similar in the summer.

By contrast, the second piece I want to talk about – Si Conflufión, by the special-character-tastically named Halka Třešňáková – is non-stop laugh-out-loud hilarious. It’s essentially a one woman stand-up routine performed in an entirely made-up language that, thanks to liberal adaptation of numerous European languages, manages to sound both plausible and vaguely comprehensible as well as being consistently very funny. It’s not unlike those Scorchio sketches from The Fast Show, in fact, but *way* funnier.

It *might* be about some future for Europe and the world in which global warming has reduced habitable areas of the planet to the maybe three regions which she is pointing to with a comically long stick in a power-point presentation. The regions themselves are represented here by close-up photos of sections of missing paint or plaster from old walls, treated like state of the art cartography. There seems to be information about demographics, populations, regional delicacies, and local conflicts. AND THEN THERE’S A Q&A! In a language nobody speaks! And some audience members with minds more nimble than my own actually manage to ask questions in something that sounds like a plausible approximation of the same made-up language. Enough that Třešňáková is put on the back foot, having to improvise both what she’s been asked and a satisfactory answer. Which she does with aplomb. And suddenly the whole has been turned into a kind of Olympic-standard game of Mornington Crescent (nice, easily understood, internationally recognised, not at all *way too niche* comparison there...). But, yeah, as well as being incredibly funny it managed to be rather touching and somehow worryingly plausible and apocalyptic as well.

The last showing I want to talk about was Teja and Leja’s I.M! On the Sofa, from Slovenia. Perhaps one waty to explain this is to reproduce their programme blurb and offer a translation:

“The performance I.M! on the Sofa is a context-specific event. Contexts are themselves posited unities that undergo temporal changes and expose their essential disunity. The show starts with taking over different identities of known and famous people, continues with the deconstruction of the self in and of itself, to fall apart at the seams; the resulting split, paradoxically, functions as a space where an event could happen. Power seems to be more than an exchange between subjects or a relation of constant inversion between subject and the Other, indeed power appears to operate in the production of of that very binary frame for thinking about identity. This performance is a parodic practice that disrupts the categories of identity, and occasion their subversive resignation and proliferation beyond the binary frame. Any kind of ‘natural indisposition’ becomes a laughable term and laughter in the face of serious categories is indispensable for any kind of serious thought.”

So, yes, first off it’s tempting to note that when the artists have an infinitely more developed critical vocabulary than the critic, then it’s perhaps tempting for the critic to run away. Mercifully I went into ...on the Sofa not having read the blurb, so I can at least describe what it looked like to the naïve spectator.

Essentially, the small audience enters a little attic room at the top of Studio Alta to be greeted by Teja and Leja seated on a nice-looking antique-y settee, dressed in fur coats and high heals. T&L introduce themselves, repeatedly, as various famous women and occasionally men – Madonna, Gertrude Stein, Michael Jackson, Angela Merkel, etc. – and laugh violently at each name. There’s a sense that it’s a kind of game, or bitchy competition (“bitchy” is definitely a trope being looked at, y’know. I’m not just saying some gendered shit here; they know what they’re doing with their postmodernism). “I am Marina Abramovich!” declares one. “I am *young* Marina Abramovich!” counters the other. And so on. Over the course of the next fifteen (?) minutes, with just introductions, statements, and two-part gags, the two women seem to delineate a kind of political and artistic map of contemporary and historical Europe. The murder of the Jews, the economic crisis (“We’re all Germans now!”), and again the looming conflict with Russia (“How do young German soldiers want to die?” “Protecting Estonia or protecting Latvia?”), not to mention attacking other productions in the festival (“Victory Day?” “Terrible night!”). (At least, this is how it seemed to me.)

If it wasn’t totally stupid to embark on some broad brush characterisation of a national theatre culture (ha!), then I would say I really like Slovenia’s way of approaching art: there seems to be a basic requirement that the ground is completely unstable from the very outset. I mean, it’s not like we doing have “character comedy” or “satire” in Britain (Al Murray’s Pub Landlord is a good example), but what we also have alongside that is a triple-underlining that it’s all alright really. This is the one thing they seem at pains to subtract in Slovenia. From Laibach’s famous interview on state TV in 80s Yugoslavia, when they refused to say it was all a joke, onwards, it seems Slovenia is the home of the discomforting satire that refuses to say “We’re only joking”. Maybe not even “we’re also joking”. And I think it’s that uncanny gap that makes the stuff said work that bit harder. The not knowing exactly where you stand that makes you interrogate your own ethical responses, instead of allowing yourself to be fed comfortable piss-taking. And, yes, ultimately, I think T&L completely fulfil their above blurb with no small amount of élan.

So, yeah. That was the Bazaar. Brilliant artists, their penetrating analysis, and an overwhelming sense of gloom that we’ll all be at war with Russia by Christmas.

What maniac was it that said art was good for the soul?
Posted by Andrew Haydon at 11:24

"Apparently Latvia reintroduced compulsory national service three days ago." Didn't you mean Lithuania? As Latvian I might support the same decision here though.

Someone there told me Latvia. They might have been thinking Lithuania, though. Oops.