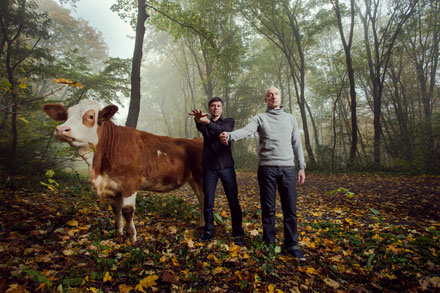 Oleg Soulimenko and Andrei Andrianov’s Old Chaos/New Order is conceptually a really neat idea. It’s a contemporary dance piece which has been made by inviting five different artists of various stripes to write the Vienna-based Russian duo “letters” from which they’ve made their performance. We don’t see the letters, but it is plausible that they variously took the form of dialogue, suggestions, impulses, or perhaps were genuine letter-like letters from which the performers simply extracted the five episodic pieces that we see across the course of the hour.

Accordingly, the first “scene” or “episode” (or, precisely, letter) – from Markus Schinwald – is entirely dialogue, which the pair apparently discussing how to make their piece in the dressing room in the Ponec Theatre. They obsess about their being Russian, about having to speak in English in the context of making *International* work, about Stanislavski, about whether they should just “get naked and fuck each other” on stage, and so on. They do not once, make an entrance.

By my reckoning, they only come on for the second letter. This is a far more word-free, movement-based bit of work after all the talking of part one. They come on, Soulimenko in fur coat, unbuttoned frilly short and tight jeans, Andrianov in an even more floral version of the same in a hat. They do movement. Andrianov making fluid movements radiating outwards from his right hand, his whole body eventually mimicking water were it to have been portrayed by Nijinsky: Soulimenko, by contrast, trying to stop his own right hand even beginning to move. Halfway through this bit they swap these roles.

The third letter is written by one of the Janez Janšas (if you don’t know this story, after Yugoslavia fell apart, the prime minister of Slovenia for a while was a right-winger called Janez Janša – he comes out of the 90s BBC documentary The Death of Yugoslavia rather well, but was less popular among leftie artists in his homeland. Anyway, a performance artist, and tow of his friends decided to also change their names to Janez Janša, and formed a collective, I think, called Janez Janša. This really annoyed Janez Janša. This may or may not have had to do with the principle of radicial overidentification.) Anyway, Janez Janša’s letter is far and away the most *conceptual* thing yet, including, presumably, instructions (“he pours the ice into a bucket”) which are not precisely followed (there is no bucket. The ice spills across the floor) which may or may not have been in the letter (we don’t know, we don’t see the letters). There are also videos of Janez Janšas from all over the world offering messages of encouragement or discouragement to Oleg and Andrei.

The fourth letter – from Berlin-based American choreographer Meg Stuart – is, well, whatever the letter’s like (and I’ve just discovered that the letters and the scripts or whatever else that came with them are actually included in an extended programme we were given last night...) the performance that comes out of it feels like the weakest section of the show, a kind of limp drift after the high-concept fun of the Janez Janšas.

The fifth part – by which point, a mild feeling of overkill has set in – is actually quite fun, in that it seems to instruct the pair to built a little raft (a process during which last night, the slot-together sections took it uponm themselves to entertainingly misbehave) and then push or drag it around the stage a bit by means of long thin “Chinese red” sticks. On the platform is an “object of contention” in the form of a little model mountain. At the end smoke comes out of the mountain and the lights go off.

As is becoming traditional with first shows at Eastern European Festivals, I saw this piece while absolutely buggered by tiredness, and consequently, at present, I can offer precisely zero analysis. Some of my colleagues with shorter journeys and later waking hours committed as far as non-plussedness. I was quite amused by the whole, and it was nice, after what feels like an aeon of mostly theatre, and a bit of the more trad. end of contemporary dance, to see something that was so concept dependent. Perhaps I’ll manage something a bit more useful when I’ve caught up with my sleep.