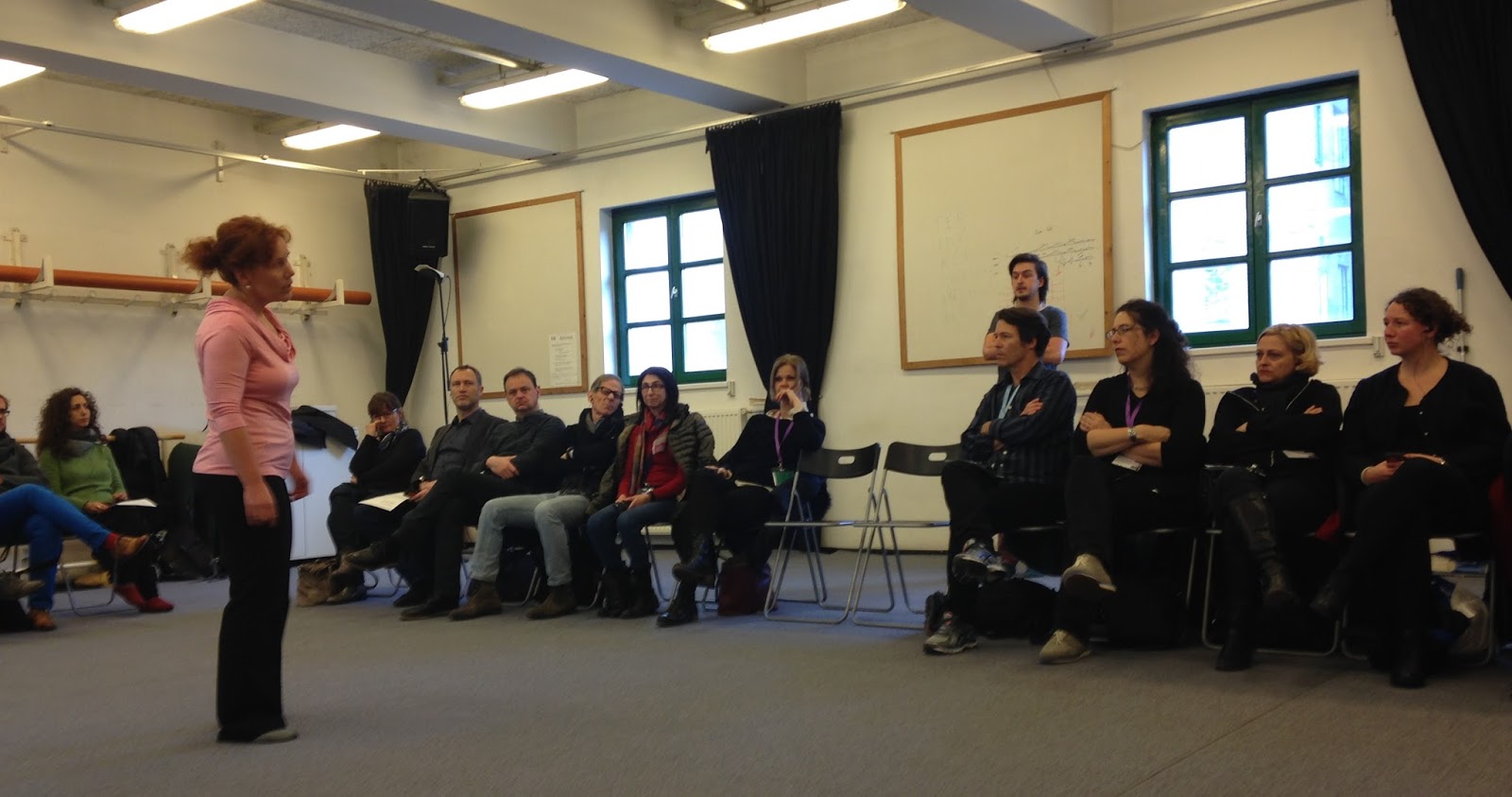 Dollardaddy, the company behind HOME – a free modernisation of Strindberg’s little-known play The Pelican – are fêted in the DunaPart festival programme as one of Hungary’s youngest ensembles and “truly risk-takers”. And on this showing, there is indeed much to recommend their approach to theatre.

Like Chris Goode’s Signal-to-Noise Tempest or Home-Made through to Barrel Organ’s Nothing, Dollardaddy are a company that perform in non-theatre spaces, previously offering a version of Hedda Gabler in audiences’ own homes. I suspect that may also have usually been the appproach with this 2014 free adaptation of Strindberg. An approach curtailed here thanks to the requirements of a festival setting, and playing instead in one of the Trafó arts centre’s rehearsal rooms (lending it more than a hint of Annie Baker’s Circle Mirror Transformation, especially the Portuguese production).

The company are also attracted by the rigours of the Dogme manifesto, and to that end, the only lighting is that found in the room, the only music is played one means visible in the space, and the acting is fully naturalistic; the hitting of the young adult son by his mother is entirely real.

All this is excellent. Then, perhaps in keeping with the slightly improvised feel of the performance, the translation from Hungarian into English is simultaneous and delivered through radio-earpieces, rather than being surtitled. There are definitely advantages as well as disadvantages to this as an approach. On one hand, you are totally free to become visually absorbed in the performances; your eyes aren’t forever darting off to see what they’re saying. On the other hand, the *neutral* tone of voice typically adopted for this sort of translation – the translators try not to “act” at all themselves – is never quite so much “neutral” as “slightly *too deadpan*”. No criticism of our excellent translator is intended here whatsoever, but it is true that this sort of headphones performance should almost be made a genre in its own right. Because it’s not just neutral, the delivery has a huge bearing on how you relate to the performances. It took me much longer than usual to tune into listening to how the actors themselves were performing, rather than just listening to the translation as the most laid-back radio play ever.

Of course, in this case some of the explanation for why this happened lies with the style of the production. HOME/The Pelican starts as such a *natural*, conversational level, that the simultaneous translation is barely any more deadpan. By the end, being one of Strindberg’s mother/woman-hating melodramas, it’s all shrieking cruelty and violent insults, but for a good long while before that, it’s a just a nasty slow-burn of a thing where a daughter brings her new husband back to the home she shares with her mother and brother, whereupon the mother immediately starts an affair with the new husband, who in turn is vile to the mother. And there’s more unreconstructed male-gaze as Krisztina Urbanovits (Elise, the mother) strips off her top, as per the directions of this new version, so that Tamás Ördög (Axel, her son-in-law; also company co-artistic director, and director of HOME) can make particularly vicious comments about her physical appearance.

As a piece in its own right, it’s a nice riposte to those articles that periodically crop up in British newspapers either inveighing against “versions” or updates of classics. And, pace Rupert Christiansen’s recent addition to the genre, by virtue of being a “version” created in the actors’ own words and idiom, and with all the relationships thoroughly modernised – at least to the point that the uninformed would never know it was written before 1907. That said, I do always wonder why anyone wants to do even just updated versions of Strindberg’s plots. I mean, really, those are the least part of his dramatic achievement. If there was ever anything to recommend him, wasn’t it more his prose and social critiques *at the time*? Isn’t everything else just a particularly sour man’s (I’d say inaccurate) take on what life’s like? I mean, yes, I’m sure these sorts of melodramas do play out in families from time to time, but I’m not sure I’d necessarily hold them up – now or then – as particularly rich or indicative makers of the human condition. Even as a metaphor – “in a very real sense, we’re all just screwing our mother-in-law” – it doesn’t strike me as especially apt. I dunno. I guess it’s a matter of taste.

That, or the Strindberg and Helium cartoons (below) made it impossible for me to ever take a word Strindberg wrote seriously again. Still, this felt like about as good a way of doing the play as I can imagine, even if, on balance, I’d far rather have been watching Hedda in a Hungarian house.