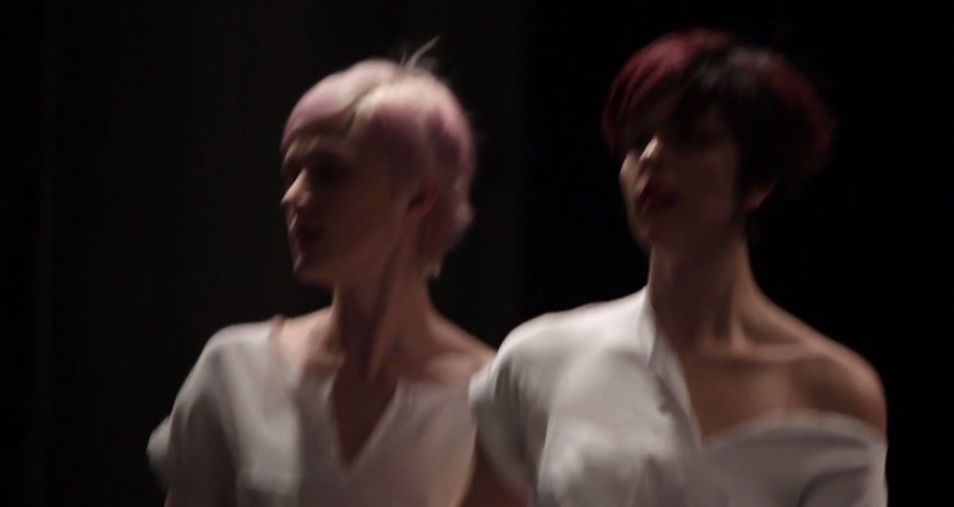 Until maybe fifteen minutes before the end of Stepintime (Lépésidő) I was going to write a fairly sarcastic review that went a bit like this:

Writing about contemporary dance can be that bit more difficult than writing about theatre. Consider the pro forma for the average MSM theatre review:

What's the most times you've watched two people walk a figure of eight in lockstep?

In Body Lotion Co-Dance’s Stepintime dancer/choreographers Virág Arany and Júlia Hadi walk in a figure of eight for roughly half an hour. Sometimes it is quite a big figure of eight, sometimes quite small. Sometimes they do it with serious faces, sometimes more saucily, but always it is a figure of eight. At one point they stop, pretending to chew chewing gum. They also do this in time with each other. They hold each others’ hands, crossed in front of them, a bit like they’re holding the reins of horses. This is all the plot.

They are on a big, bright, white floor. The big, bright, white lights are pointed at the floor. The two women wear white shirts and black trousers. One is bleach-blonde, the other has dark brown hair with red highlights. They look a bit like Hungarian Lucy Ellinson and Hungarian Deborah Pearson. They walk in figures of eight. These are all the visual components.

Speculate wildly as to what it all means until wordcount runs out. Then bash out a snappy closing line which ideally reminds the reader of the snappy opening, giving a sense of STRUCTURE:

It seems entirely possible that the walking around together, and the changing, modifying attitudes struck speak to a version – albeit a somewhat schematic, gender-essentialist one – of young women growing up, certainly the curator’s note in the programme seems keen to point us in this direction. And indeed it does seem observably true, that the performers seem to “ grow up”, going from innocent play to flirtation to jadedness to death.
Perhaps rather than a figure of eight, the symbol we’re looking at in infinity ( ∞ ).
Perhaps the most times we can watch people walk in a figure of eight is infinite.

And, until fifteen minutes before the end, that would probably have been my review. But what happens in the “middle” is that the women collapse and a “black noise” kicks in (this is the term used in the programme to describe Zsolt Sőrés’s score. It’s like white noise, but somehow more majestic, orchestral and weaponised). And the women start again, only playing the whole thing backwards. Sure, I’m a total sucker for people doing stuff backwards live. And, yeah, I'm a pushover for *sickeningly loud orchestral white noise. But quite aside from happily pressing both my buttons (I only have the two), this also made a violent dramaturgical sense of all that had gone before. The final maybe five minutes of the show are this black noise being played to the room in pitch darkness. It’s powerful stuff indeed.

The piece was charming enough in the first place, and I needn’t have necessarily been sarcastic in the review of the first thirty or so minutes, but there was a huge sense of “Really? Seriously? Just this?” And people (me) did take the opportunity to read the programme, the notes left on the chairs, the information about the rest of the day’s performances, and so on. Part of me is prepared to believe that if I’d had my dance brain switched on, then I might have made less heavy weather of it, but at the same time, it is slight and hard to watch, which is what makes the second half so rewarding. Still, it is also just a hard watch period, albeit one which I reckon was worth sticking with and putting in the effort. I think further interpretation is possible, but rather than spoonfeed you, I’ll just record my approval and leave you with the description of the full set of visual images for you to draw your own conclusions.