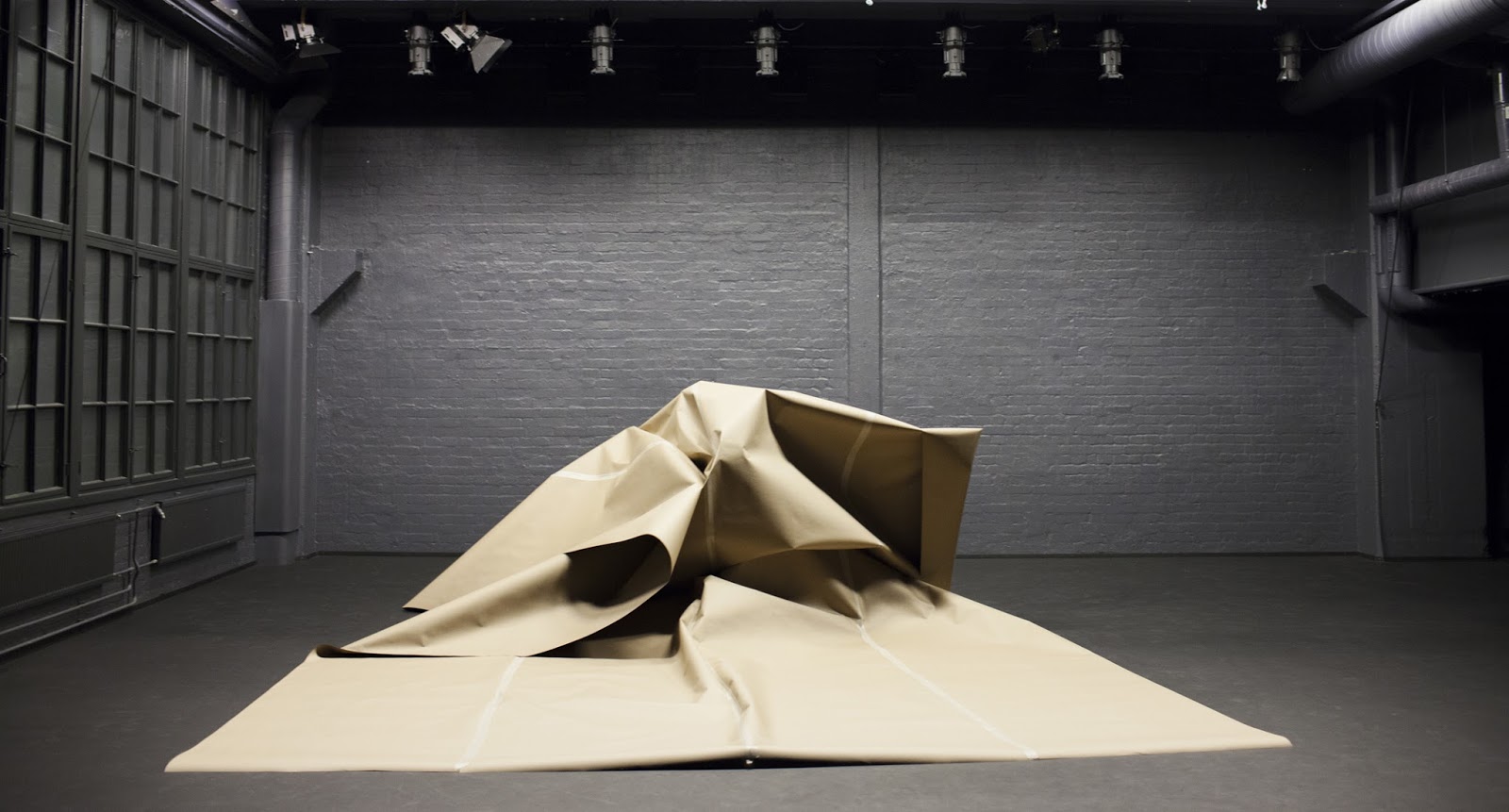 The start of Lithuanian dance artist Andrius Katinas’s Work involves the artist walking onto the stage and nonchalantly swinging a plastic bag slowly round and round with his right arm. He does this for long enough that you start to work through the concern that this might be all he plans to do for the next forty five minutes and actually start taking a real interest in it. In the way the bag moves, how it responds to the air, how his arm must feel, and so on.

I guess this is a very particular thing that (some) contemporary dance requires of its viewer: a willingness to really *think* or *invest* in repeated movements that, on the surface, could be considered a) banal in the extreme, b) tedious/repetitive, c) movements that “anyone could do”. Contemporary dance might be said, then, to engender a different quality of attention. Something perhaps related to that excellent passage at the end of Nick Ridout’s Theatre & Ethics (last quoted by me in May 2013, here), about what that quality of attention might mean for us as audience members.

But, just as we’ve made our peace with this lo-fi version *that bit* from American Beauty, Katinas begins to recite Mladen Stilinović of NSK’s In Praise of Laziness. I have to admit, I didn’t know it was written by someone else at the time, or that the person who wrote it was from NSK (the Slovenian art collective who most famously brought us the band Laibach). Not that this particularly matters, maybe, since Katinas appears to inhabit the preposterous pseudo-serious claims made in this manifesto (example: “Art cannot exist in the West any more. Why...? Artists in the West are not lazy.”) in deadly earnest. And, still twirling his plastic bag. Perhaps the manifesto has been repurposed as a proposed truth.

Just as we’ve eased ourselves into a peace with this new didacticism, Katinas unceremoniously dumps the bag and does a bunch of stamping around. Then, as suddenly as he started, he stops again (the effect of this is unaccountably very funny), picks up one of four rolls of brown paper and takes it to the far side of the stage. He carefully unrolls and lays the paper flat on the ground. He returns to the corner where the rolls are and repeats the process. Three more times. Until there is a large brown paper square on the floor. He tapes it together, and then lifts one corner. Gradually, he drags the paper over himself and into a corner.

There now follows a, what? ten or fifteen minute sequence, during which all that happens is that we watch an amorphous (if that’s the word) brown paper shape slip, rustle, slide and crunch across and around the stage. Variously it is sculptural, balletic, funny, troubling, hilarious, uncanny, and occasionally irresistibly similar to about 50% of the monsters on Dr Who in the 1970s. (It’s also curious to note that the second to last piece of Lithuanian dance I saw also involved the solo dancer wrapping themselves in a bunch of paper.) I was reminded of something (to which I’m sure I’ve referred a hundred times since) that Mike Alfred’s said at NSDF2000: that theatre was ultimately always about the human form at its most basic. I have since loved anything which disproved this, and this felt, in every way, more basic than even the simple human form. It wasn’t even human-shaped, it was *more basic* than that. A kind of pre-human, almost rock formation thing. Not even fluid, but crackling, jagged and brittle. A kind of creature that would pre-date humanity (were it ever to have existed) by some hundreds of thousands of evolutionary years. The sort of thing that might live in volcanoes or on the bottom of the sea.

At the end of this remarkable sequence, a hand emerges from the paper, slowly maybe clawing its way out of this hideous shell. Then a foot. Improbably far away from the hand. And it is revealed that (SPOILER!) at some point in the last sequence, Katinas has snuck another person under the paper with him, making more sense of some of the things that he appeared to manage to make the paper do by himself.

The next section – and there’s really no apology about how distinct these sections are, even as they do recontextualise and modify our understanding of them – sees Katinas performing the most “dance-like” section, his body hard and taut one moment, then with limbs drooping from their sockets, like those of figures in some mediaeval etching about sin. Like a cross between the Royal Ballet and Hogarth’s Gin Lane.

He then goes and gets a plastic bag of objects and tips them onto the floor. And turns out all the lights. Pitch darkness. In the darkness, he turns to the objects around him, and it transpires that they are little lights, activated, landmine-like, by being stepped on.

The lights turned on all around him, he shoves them off across the stage like so many stars in an expanding universe while gorgeous music by Lithuanian composer Onuté Narbutaité plays (some below, although pretty sure it wasn’t specifically what’s below, but it gives an idea of the kind of thing). It all feels kind of grandiose, cosmic, and kind of God-like – almost like a Creation myth (not un-apt, given the music is from three symphonies for the Mother of God). Once this constellation has been unfolded, Katinas goes offstage, through a door into an unceremoniously lit room, before stomping about the stage stamping the stars out again. We listen to the end of the music in pitch darkness.

Annd that’s pretty much it, in terms of what happened. It’s not really enough to leave “the reivew” as *a description*, but I hope I’ve added enough detail along the way to give at least a hint of how somehow life-affirming and warm the entire thing felt.

Talking to a few Hungarian colleagues after the show, I discovered that my warm and fuzzy regard for the thing was not a feeling universally shared across the assembled throng. But, well, to hell with them. I liked it very much indeed. Perhaps, yes, it did sacrifice knowing irony for a Quixotic sense of romance, and possibly even religiosity (tho’ that might well have been just me bringing that reading), on the other hand, I found it genuinely warm, funny, and strange in the best ways possible, even while coming over all arch and superior. Katinas is clearly a talented dancer, and I think, more crucially, quite the dramaturgical talent too. This was a small, fragile intimate work that achieved an near-unprecedented sense of the epic. I loved its total disregard for ideas of what sort of scale you can achieve on a relatively little stage. More of this sort of thing, please. 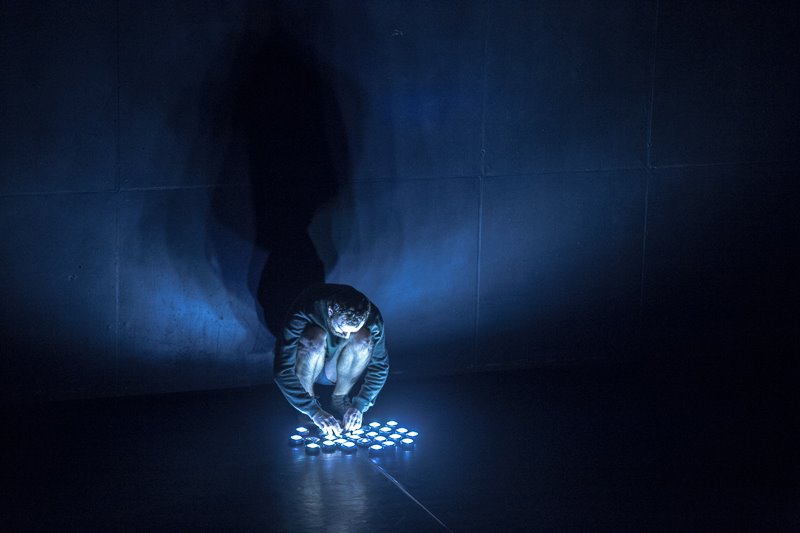