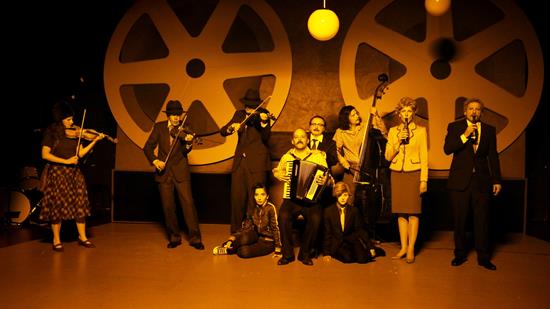 Belá Pinter is big news. He’s Hungary’s foremost playwright and Our Secrets (Titkaink) is his latest play. Which he also directs and acts in. And during it, I actually turned into Quentin Letts*. What? Let me explain.

The basic set up of Our Secrets is the Hungarian take on the horrible problem of post-Communist countries: discovering which of your friends and neighbours used to be informers for the secret police, cf. Der Leben der Anderen or Small Narration. However, unlike in Poland and the former East Germany, records in Hungary have never been officially released. This theme is coupled with the apparent trend for ethnographic rediscovery of Hungarian folk music at the beginning of the eighties, apparently smiled on by the regime, even if it did tap into its fears about “irredentism” (the practice of countries wanting to annexe parts of other countries – in this case Romania – on the basis of large areas of their ethnic countrymen. Russia and the Ukraine is probably the worst example currently).

Into this heady situation is thrown our entirely fictional protagonist, István Balla Bán. In an early scene we meet him talking to a psychiatric doctor – he has fallen out of love, and out of desire for his wife, and fallen in love instead with her seven-year-old daughter, Timike. It’s a brave decision for any playwright to make their lead character a self-torturing paedophile. What’s less good is having said lead character and the seven-year-old girl carrying on a sexual relationship in which she goes down on him quite happily, as if it were a childish game. On stage. I mean, yeah, sure, Timike is played by a short actress who I’d guess was in her twenties or thirties, but even so... Suffice it to say, my jaw literally dropped.

Earlier yesterday a colleague christened DunaPart “the festival of the seven blow-jobs” (arriving on Thursday, I missed the first three), this, the eighth, is probably the most shocking thing I’ve ever seen on stage. There we go. I’ve said it. I was *deeply* uncomfortable. Which might be a good thing. Who knows? I’d be intrigued to see if *any* theatre in Britain would put this on – it’s an ostensibly naturalistic play in which a seven-year-old girl enjoys blowing her step-father. Go on, try selling that to an audience. I’m prepared to believe it might be a) a dream sequence – the bit where she turns up later dressed as Michael Jackson and breastfeeds István definitely is – and I’d be prepared to believe it’s b) a metaphor for something in Hungarian politics. And I’m even happy enough with the idea that it’s c) a diagnosis of what Pinter sees as a national problem – God knows we Brits should recognise that one. But as it stands, starkly on stage, it doesn’t read like a), b) or c), it reads like a shrugging endorsement of consensual adult-child sexual relations. Which is way too uncomfortable to just take in one’s stride. It’s even written so plausibly, that we might accept the situation as possible, but the play takes no further responsibility for this material. And, yes, I’m listening to myself here and thinking “should plays ‘take responsibility’ for what’s in them?” And, yeah, I feel staggeringly ungroovy, and lots of people have said how marvellous they thought the play was, and all I can think is: “What? The play where the seven-year-old girl happily plays with her step-father’s cock? That one? That was good, was it?”

Told you I’d had a Quentin Letts-sized sense of humour failure. (Yes, really, sense of humour is right – the scene is presented with what even seems to be a mild comic undertow...) So, yeah, that part of the play was pretty bloody tricky. Oh, and people who think trigger warnings are yet more political correctness gone mad will be pleased to note that Hungary doesn’t have any...

I have no idea whether my particular discomfort comes as a result of Britain’s current ongoing massive excavation of its own horrifying past in the wake of the Savile investigations and operation Yewtree, or some deeply-held Anglo-Saxon belief that seven-year-olds will necessarily find having their trust abused by a parent deeply traumatic, but, yeah, that has to be the most difficult thing I’ve ever had to watch on stage, and most problematically, I don’t think it actually moved the action on one bit, compared to, say, if nothing actually *happened* between István and Timike.  i.e. dramatically, it's entirely superfluous.

Anyway, there was a rest-of-play that needs talking about. Perhaps the biggest surprise for me (apart from the above), was what a *normal* play-play it was. Maybe not quite “normal” in terms of British conventions – the dialogue was much more on-the-nose and direct than Brit-writing tends to be – but in terms of a linear narrative moving forward through time, with all the characters being (at least in theory) psychologically recognisable, and the action being (again *mostly*) realistic. I’m not sure what I had expected from Hungary’s premiere playwright, but I guess it was perhaps something a bit less reminiscent of Tom Stoppard’s Rock‘n’Roll with added statutory rape.

The rest of the plot, fwiw, István gets recruited by the secret police, who have bugged his apartment and blackmail him over his paedophilia. As a result he turns in his best friend who is the editor of a subversive, underground magazine. He leaves his wife (she with the step-daughter), Timike tries to find him and gets run over by a tram and nearly dies. And later he drugs and nearly rapes his friend’s young son with a chisel or knife (á la *that scene* in Shopping and Fucking) – then, eaten up with remorse, István stabs himself repeatedly with the same chisel or knife. To death, it seems.

The set is a painted floor flanked by the musicians who provide the live folk music soundtrack and interludes. The rear wall is a giant reel-to-reel tape machine with two almost constantly turning spool reels. As sets go, it’s both quite appropriate, but not very well realised (stage: Gábor Tamás). Similarly, the acting is remarkably unshowy, not to mention calm, and barely histrionic at all. Indeed, overall there were elements here which really flagged up what a peculiar beast even the *normal* British play is. How many odd little bells and whistles we observe when something like this – shorn of almost all artifice, and incredibly straightforward – is still (in the main, consensual child-rape not withstanding) an effective vehicle for narrative.

But, yeah, I’m afraid I really didn’t get past the child-rape thing. Which I have been thinking about a lot. I mean, I wasn’t personally *shocked*, other than that someone had deemed it at all a good idea to put on stage. I certainly wasn’t actively “upset” – due in large part to how it was staged, with a clearly implausible actress playing the seven-year-old, and the total lack of any psychology around the scenes. I did question whether I found it appalling because we Brits are really just a big pile of self-censoring wusses who never really front up to the real problems of the world and what staging them would really look like.

All that said, I would be properly interested to see a read-through of this with an English cast. I bet Richard Bean (or similar) would even knock up a really decent *version*. And I bet he play could even have a moderately successful run at the Hampstead, or some other old folks home for grubby naturalism. It would certainly throw a hand-grenade into our cosy assumptions about what constitutes a safe subject. On balance, I don’t think the UK’s quite ready for it. Or maybe it’s just me being over sensitive. But I don’t think it is.

*For the benefit of mainland readers, who have no reason whatsoever to know who Quentin Letts is, he’s the “theatre critic” of the Daily Mail, one of Britain’s worst, right-wing newspapers, and habitually objects to anything even remotely “off-colour” on stage, from swearing upwards.

**Interestingly, Mark Brown saw it last year and really liked it.  Proof that other opinions are always available.
Posted by Andrew Haydon at 09:05