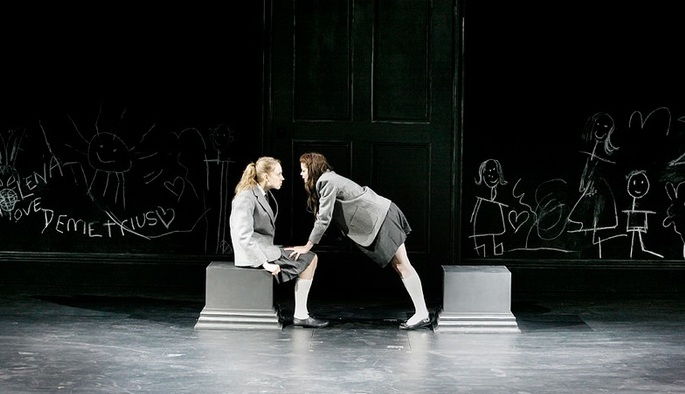 On one level, Everyman associate director Nick Bagnall’s MSND is a model of textual clarity, albeit one occasionally let down by some unforgivable shouting (mostly the Titania and Oberon scenes). To look at, however, it’s one of the strangest Shakespeares I’ve ever seen.

It opens ordinarily enough, with four short, square plinths breaking up the Everyman’s square thrust stage. The black, (fake) back wall has chalk graffiti about the lovers (and an amusing “Puck” with the round bit of the P half-scrubbed-out – so: “Fuck”), a large door in it and a big clock on it. Then the cast come out. Theseus and his Amazonian bride Hippolyta are dressed as a kind of junta from the 25th century – spangly white military-style jackets – while the lovers seem to have just stumbled out of Narnia or Harry Potter in 1950s public school uniforms. So that’s all pretty weird. The working class am-dramatists are all clad in orange overalls (because that’s what weavers and joiners wear in fascist 2415). Oberon and Titania are dressed like refugees from a late 70s disco video (while Peaseblossom and co. are genuinely clad head to foot in black like so many ninjas. I shit you not, and know not why). The forest, when revealed, has a mirrored back wall and is mostly composed of strewn crumpled white paper (oh, and a blue lighting state for the fairies and a nice warm glowy one for the humans – stark contrast to Athens’s never-knowingly-understated Very Cold Lighting because The Scary Future). So, yeah, it’s pretty *eighties*. Studio 54 meets Captain Zep at a roadworks on the A57.


It’s a shame the design is so scattergun (and often ugly), because at root there is actually some really intelligent text work going on here. Bagnall seems to be offering what feels like a pretty full-text version – the thing runs 3 hours (3 HOURS. JESUS.) with only a fifteen minute interval – and is most interested in highlighting just how problematic the treatment of women (and the predicament of all the lovers) is. The masterstroke here is that Demitrius (Matt Whitchurch) is revealed to be an utter prick of the first water. His public schoolboy-isms make him the opposite of endearing, but once he starts with the threats of rape and beating women, he crosses the line from petulant prefect to something much, much worse. Are these bits usually cut? Do other directors interpret them differently? Because they sounded pretty unequivocally, straightforwardly vile to me. In light of this the fairies seem particularly callous, or rather, they would if they seemed anything more than shouty, aimless and adrift. It’s especially odd, since Sharon Duncan-Brewster and Garry Cooper also play Hippolyta and Theseus too, and really rather well,

The other index of a MSND tends to be how funny the mechanicals are. Here, in the main, they’re pretty funny. And, as only notably Liverpudlian-(or even vaguely northern)-accented cast members, there’s a warmth to the reception of their scenes where you glimpse that sense of civic pride that maybe sets the Everyman apart from a lot of other English theatres. Dean Nolan does particulary sterling work as Nick B – staggeringly nimble for a big chap, he cavorts, flirts, and somersaults his way about the stage like it was a one man show all about him. Which is pretty right for Bottom’s bumptious approach to scene stealing. It could grate like Jack Black invariably does, but Nolan – replete with enormous beard – is channelling so many Brian Blesseds that it’s a surprise his Pyramus costume breast-plate doesn’t have wings on the back. Elsewhere in the cast, Emma Curtis’s Helena is possibly the most characterful reading I’ve yet seen of a character who usually amounts to a collection of simpers. Curtis invests her with a kind of wide-eyed, kooky psychopathy that transforms her endless love for Demetrius from something inexplicable and twee into a rather monomaniacal stalking campaign.

Overall, then, the production is like a slow strobe between delight and despondence. Taking the whole at a leisurely pace, some scenes quickly lose the attention and appear to drag on into infinity, while others completely restore your confidence in the enterprise, have you leaning forward in your seat, laughing or wincing as appropriate. There are some very fine musical numbers – the fairy ninjas doubling up as a kind of slow electric skiffle band – and overall it’s a reading of the play I was glad to have seen and which added a bunch of intelligent ideas to the text’s performance history.

That said, I don’t half wish I could get to Dublin to see this remarkable-looking (Marthaler-influenced?) version of the play currently on at the Abbey Theatre.