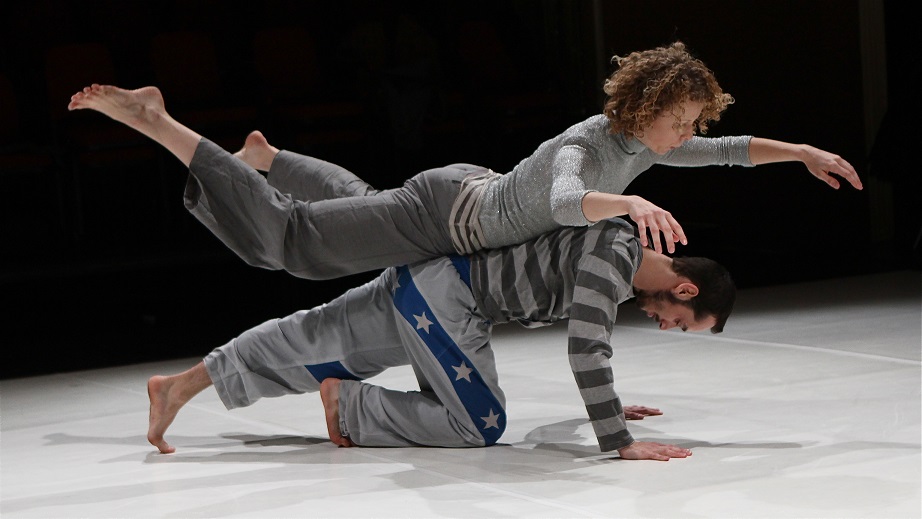 An interesting thing I find when writing about contemporary dance is that mentally I write the same ludicrous preamble every damn time. Normally I have the sense to cut it down, or altogether, but here it is again, being written.

This preamble tends to take the form of a disclaimer. Something about how I don’t really know anything about dance, and so how all my observations should be taken with at least a pinch of salt, if not the whole family-size, Waitrose sea salt refill pack. And, on some level I think that is true – if not necessarily worth reiterating every time. The amount of dance I actually see means that I am with dance now, about where I was with theatre in roughly 1999, i.e. I’ve seen *some*, and written about it. I’ve also had conversations with dancers, choreographers, and dance critics. And most of them assure me that there’s a lot less mystery than I suppose there is.

But maybe that’s the big problem with dance – especially contemporary dance – as an artform. It *looks* ineffable, mysterious, obscure in purpose. It’s also quite often “about itself”. That is to say, the easiest way of writing and thinking about dance is in relation to other dance. (Just as contemporary theatre – to use a meaningless phrase – can often be most usefully explained with reference to other contemporary theatre. Even if this is a cardinal sin of general-public-facing criticism: “not every poor blighter watches as much theatre as you. Never forget” is the ever-necessary legend over the desk.)

Something else I wonder: if you’re not likely to be reviewing a piece of dance, what do you think about while you’re watching it? I mean, it’s not exactly like my mind is solidly on The Job, but I do tend to think of sentences that might appear in a review while I’m watching dance, especially dance like Emese & Emil, which had only the gentlest of scores when there was any music at all, and, as a constant duet, offered very little by way of “narrative” or “progression?”. I even find myself having quite involved debates about the problems of the male gaze (mine), and the ethics of how to describe dance performers of either gender. Because, after all, in the absence of a plot, or politics, and with music criticism scarcely being the point, what the point is, is largely the bodies of the performers in front of you. Which tend to be the bodies of dancers. Which tend to look a certain way – or a set of certain ways, all of which generally involve extreme levels of athleticism and fitness.

Re: the performers – well, the curator’s essay for the Fest programme says: “Emese (Cuhorka) is ethereal even in her physicality, while Emil (Bordás) looks like a playful goblin”. Which is more blunt than I’d have ever been, but I can totally see where Lívia Fuchs is coming from. Goblin! Brilliant. “Ethereal” is plainly diplomatic dance-slang for slender, pretty, and very tall – especially compared to one’s Goblin sidekick.

Another interesting problem in watching/thinking about dance is that of gender relations. For a little bit, I did wonder if I was going to have to write another of my pompous tracts about sexism in lieu of a review – to start off with, the bloke spent a lot more time standing up, and the woman a lot more time lying or scrabbling on the floor. Which never looks like a particularly equal power-balance. But this got resolved. And indeed, because the woman was a whole head taller than the man – at several points she rests her chin on the top of his head – it felt like the power-balance was then shifted very much in her favour. (Which, of course, is precisely what feminism is all about, right? Who’s tallest, yeah?)

The nature of the dancing itself – quite a lot of it post-Bausch, contact-impro-looking stuff, with some neato bits where the two pull one another up by shifting their weight and standing on one another’s feet, using their own body-weights – feels like it has to be watched in a similarly gender-aware way. Perhaps more a condition of how the two here seem to be consciously performing their genders, rather than an absolute rule, but... Not that the piece really seems to be saying anything particular about gender. There are bits where the two might be a couple – they blow raspberries on each others bodies, kiss tops of heads, etc. – but by this token they could equally be siblings, mother and child, even short father and tall daugher, perhaps. If there’s a “power balance” at all, then it seems to shift ephemerally.

And that’s about the size of it. Which is where lack of experience again kicks in: is there more to it than I’ve discerned? Or is it largely virtuoso exercise, and the content is largely the form? If so: to what end, if any? Somehow, it didn’t feel to me quite virtuousic enough to justify that as an approach, although the dancers are clearly incredibly talented and the choreographer, László Fülöp plainly has some good ideas, but in this instance thdey didn’t quite add up to anything whose structure or dramaturgy had an extra reach. But I imagine that’s fine. Annoyingly, I’ve not discussed the piece with anyone else yet, so I have no idea how excited people who know about such things were. But for me, it felt like a well done thing that didn’t really make me think or feel anything in particular (other than maybe anxious about writing it up).

As a final thought, in reviewing form often follows form, so to speak, and oddly, this sort of meta- level, reviewing-reviewing is a pretty accurate map of what was going on in my head as the piece progressed.

Anyone with better insights, do please use the comment boxes below.
Posted by Andrew Haydon at 10:37