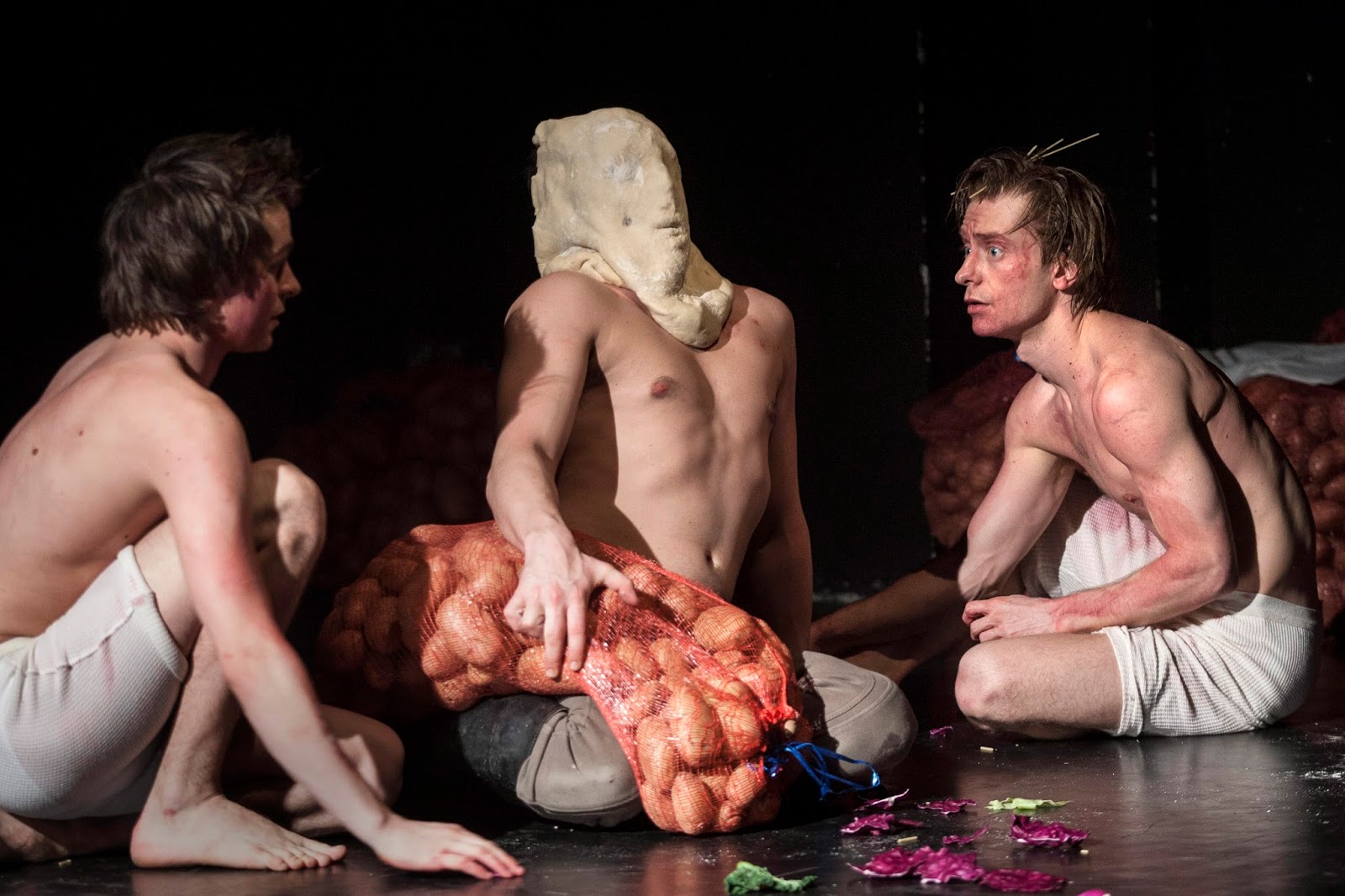 The Forte Company’s production of Agota Kristóf’s novel, The Notebook, is absolutely superb. Running at two and a half hours without interval, it completely immerses you in the lives of its pre-/pubescent twin boys, living with their grandmother throughout WWII in Nazi-occupied Hungary. Perhaps the highest compliment possible is that it doesn’t feel a second longer than 90 minutes.

The most interesting thing about this production is that there is neither a writer nor a director credited in the programme. Instead there is a translator (Mária Benedek. Despite being a “Hungarian novelist”, Kristóf lives in Switzerland and writes in French) and a choreographer (Csaba Horváth, who is the “lead artist” (and, despite ending in an ‘a’, is apparently a boy’s name)). This fluidity of approach pays rich dividends.

In the festival programme, curator Tamás Jászay offers this thought: “Call it physical theatre if you want, but I’d rather skip the adjective: this is simply theatre...” And I agree. Superficially, in terms of look and genre, it *is* mildly reminiscent of that thing which seemed to be most popular in Britain in the late nineties when I was just getting into theatre, and every company seemed to stick a lot of “movement” and “business” into ensemble storytelling type shows, usually based on Angela Carter stories if I remember rightly. And, like every movement in British theatre, it burnt out because too many people hopped onto the bandwagon, and most of the people on said bandwagon were rubbish at physical theatre and it quickly got a bad name, and the more elderly critics either ignored or despised it anyway, and everyone went back to doing social realism (“proper theatre”) until someone had a new idea.

A Nagy Füzet is a stunning reminder of why anyone thought this way of doing things was ever a good idea in the first place. The acting is superb: Csaba Krisztik and Norbert Nagy as the twins manage to mine the essence of childhood without once resorting to *pretending to be ten*, instead applying the boy’s worldly-but-innocent logic implacably with just the right mixture of chilling and heartbreaking, while around them the ensemble of Máté Andrássy (male) as the Grandmother, Katalin Simkó as most of the other women in the story, József Kádas as all the men, and Borbála Blaskó as the girl with the hare-lip, are all continually flawless in their energy and conviction. They are just exciting to watch as a unit, quite before the excellence of the source material comes into play.

The production itself is essentially made out of traditional Hungarian vegetables on an otherwise empty stage. The main elements are pumpkins, potatoes and pasta, and dough which stand in for all manner of props, other characters, physical manifestations of emotional states, and so on and so on. Sacks of potatoes are flung across the stage; a scene of torture sees individual spuds smashed against a wall; pumpkins are cradled, lobbed and even juggled with, while paprikas become everything from propstore comic noses to the flames of a camp-fire. Dough stands in for everything from hair and faces to a baby, and the state of death itself. There’s an infectious exuberance to this cavalcade of invention that draws you ever more closely into the story itself without once getting in the way of the narrative’s icy clarity.

Similarly, the way in which the movement is executed; the sheer athleticism and brutality of “dancing” (although not always *dancing*) would probably be sufficient to hold the attention for close on the running time of this piece, even if there wasn’t a story. As simply one element in service of a much bigger picture it’s strikingly better than any previous example I can think of. (Sorry, Frantic Assembly; get your coats.)

What’s impressive about the whole is the extent to which it is successful in completely evoking an imagined rural Eastern Europe (although I’ll confess, not having read more than the name of the novel’s author, I was assuming it was set in Poland, although, as a colleague pointed out afterwards when I suggested this, the vegetables would have been all wrong – but then, I’ve never claimed expertise on the vegetables of Eastern Europe. Indeed, I’d never even seen these pale, white-ish pumpkins before. Lord knows what they’re all about), and indeed in bringing its myriad inhabitants to life – always clearly distinct and delineated, but mercifully never cartoonish or grotesque dfor the sake of it. Instead of that pitfall of making everyone into a Berkoff gargoyle, each player in the story, no matter how grim their crimes, is also afforded the sort of quiet dignity that people do want for themselves, even if they are a young women offering herself sexually to a dog, a sexually abusive pastor, or a Nazi with a dangerous fetish for being whipped.

This ties back in with the way in which the twins themselves operate – refusing everything but truth and observable fact for their notebook, and training themselves against ever feeling pain, or, if not not-feeling-it, then being able to withstand it.

Oddly, this ability to withstand pain, even emotional agony, is also where perhaps my only question about the piece crops up. Certainly the twins appear to manage to conquer their own reactions, give or take, but in doing so, here they seem to have conquered ours too. For a piece which depicts so many horrors and so much carnage, I was left surprisingly unaffected by it. Told another way, this could have had me curled up on the floor sobbing by the end. It was interesting to me that in this production it didn’t try to at all.

Nevertheless, despite its lack of direct sentimental emotional impact, the story itself seers itself onto the imagination, and leaves plenty of intellectual tangles to work through as well. This is, in every sense, a remarkably accomplished bit of theatre, and someone should transfer it to UK ASAP, thanks.
Posted by Andrew Haydon at 13:54