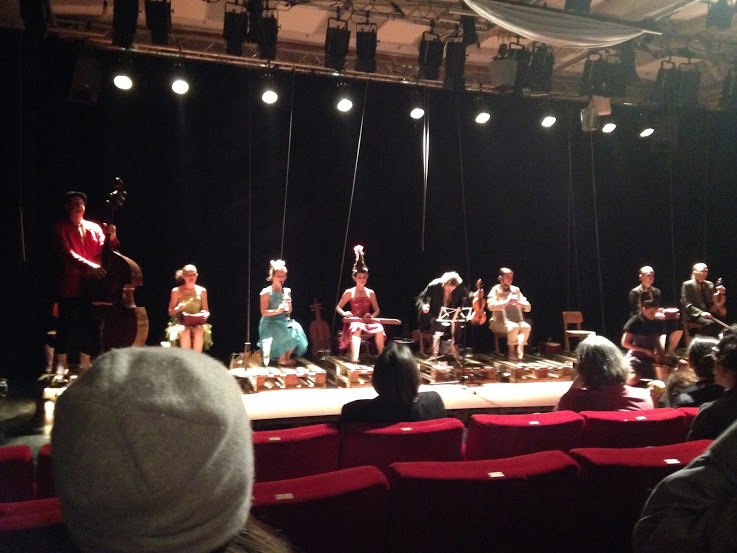 I’ve been staying in your beautiful capital for four days now and I like it very much. Very much indeed. And I think DunaPart is a really brilliant festival. I really like the mixture of emerging and established artists, and the evidently careful curation, and love knowing that I could stay twice as long and still only see half the excellent work here... But, I do think we need to have a bit of a chat about feminism in theatre. I know, I know, I’m hardly the person to talk to about feminism. I don’t want to speak on behalf of women; and God knows I don’t want to behave like some condescending Westerner. And, no, it’s not like UK theatre is a shining beacon of equality in any way at all. Nevertheless, I think you have a bit of a problem when it comes to the objectification of women.

I guess I’ve been giving you the benefit of the doubt. Sure, the female nudity in Dementia was gratuitous, but you seemed to balance it out with some equally gratuitous male nudity, so I let it go. Similarly, that bit where Krisztina Urbanovits, playing the mother in HOME, was suddenly topless: I thought, ok, there’s some textual argument for that happening. And, because The Notebook was so good overall, I figured I’d let all the toplessness in that go, not least because all the blokes were also topless throughout, and most of the time the women got to wear clothes, right? I don’t know how it’s been on the dance side of things – my brief experiences yesterday afternoon suggested that women in dance maybe get to keep their clothes on? And, ironically, for all it’s appalling 2D, objectified women and seven-year-old sex objects, there wasn’t any actual nudity in Our Secrets.

But I think in Forgotten Songs you might just have jumped the naked shark. Are you doing it because you think it’s edgy? Because I promise you, it’s really not “edgy” for a bloke to transgress some decency taboo by treating someone else as a sex object. And surely the female nudity here was just mad, wasn’t it? The overall presentation of women in the piece? Entirely decorative as opposed to the entirely task-driven, functional men: doing their hair and make-up, or else just being filmed close-up in a live-feed *as a landscape* while being squirted with water so that some little origami boats can sail over their buttocks and eventually gather in a little pool in their lap? It’s not good, is it? I don’t foresee that excellent proponent of live-feed video, Katie Mitchell, reading this description and kicking herself for not having thought of that first. I don’t imagine it becoming a regular motif in the work of, say, Carrie Cracknell or Maria Aberg or Gianina Cărbunariu . Indeed, crap tho’ we in the UK undoubtedly still are at gender stuff, I couldn’t really see *anyone* thinking they could get away with this. Not when it’s an entirely open-ended bit of whimsy, where the fact that it “just happens” to be a women doesn’t cut it as an excuse. And, tnly naked man is a 15 inch high puppet. I’m not sure this naughty homunculus really redresses the balance.

And it’s a shame it was there at all, because elsewhere in this mad little thing you’ve made, I was completely charmed by the whole bonkers set-up, and the sort of late 19th century, mechanical toys kind of entertainment.

For British readers: Forgotten Song is essentially one of those “Eastern European” shows that used to turn up at Aurora Nova, think Russia’s Akhe, or maybe the more fanciful end of Derevo’s repetoire. In my travels, I had often found it quite strange that I hardly ever saw work that looked like that almost clichéd imagined version of what “Eastern European theatre” looks like (as if the various countries aren’t distinct). Here, at last, was some of that sort of work being celebrated in its own land. And rightly so, for the most part. Leaving aside the questionable female nudity, and perhaps troublingly secondary role that women seem to play in this production (and, to be strictly fair, it’s not like the men really have much more by way of interior lives in this piece, it’s more like everyone’s a gender-essentialist automaton, and blokes just do heavy lifting rather than decorative nakedness, which hardly means they have more agency), it’s a a frequently clever set of games, or vignettes – almost like clockwork wind-up toys doing their thing. A woman nails her wig to her head and a heart to her dress, a bloke and a woman stretch a miked wire which is played with a violin bow by a second bloke, shredding the fragile horsehair in the floodlight. Songs sounding like a cross between the Tiger Lillies and Vic Reeves’s singing in the club style are sung. Indeed, for theatre-au-fait Englanders, imagine if Little Bulb got trapped in the late Austro-Hungarian Empire: this is pretty much that show. But with added sexism.

I was surprised in a discussion earlier today to hear a German festival guest on the panel suggest that this sort of “soft eroticisation” was a positive in view of the number of “sexual abuses” committed against women on stage over the course of this week (before I arrived, both Othello and a Gogol initiated this week-long theme, apparently – I didn’t bring this question up, a Scandanavian visitor did). It showed a different side to women, this German man claimed. “Hmm” I thought to myself, entirely unconvinced. I mean, *maybe* I’m being over-sensitive about this, but it’s kind of hard to come from a country which is experiencing its biggest feminist movement in well over a decade, and not be swayed by the movement’s arguments. Even as a bloke, you’re capable of reading and taking on board the fact that maybe female performers, not to mention women in the audience, are a bit tired of seeing themselves and women like them through a male gaze, entirely objectified and rarely given anything like an interior life.

Do I think the “soft eroticising” of women is a positive step against constant portrayals of sexual violence? No, I think it’s pretty much the starting point and the endgame of exactly the same thing, and I am mystified how anyone can think differently. At least, that’s how the current prevalent trend in Anglophone feminism has it, and what kind of position am I in to know better? As the American woman on this morning’s panel diplomatically suggested, once there are more female directors working at a high level in Hungary’s free scene, then maybe this blanket male gaze will be lifted. Until then, would it kill the blokes to maybe try thinking their way around their libidinous mise-en-scene?

So, yes, if this had happened to be the first piece I’d seen at the festival, or had been the first bit of female nudity in a piece directed by a bloke, then I might have just thought, well, that’s pretty silly, but whatevs, no one’s got a gun to anyone’s head. But since it was the most gratuitous example after a string of others it is Forgotten Song that’s getting it in the neck, rather than, say, Dementia.  And, yes, actually it is starting to feel like maybe there are metaphorical guns being pointed at female performers by male directors. Again, maybe this feels like a distraction from the main event of the show, but is it? I mean, maybe the point of criticism, especially international criticism, isn’t to transport your own cultural apparatus to a different location and then use it to pick on indigenous work. And maybe some people feel that the work of the critic isn’t to police gender politics (again, especially in other countries). I guess I just think that it’s something worth mentioning. After all, why open your national work up in an international context if you don’t want to learn what (I promise) a likely mainstream reaction from those other countries is?

Sorry to be a grump, but I really do think this is really important.  And I think it's an attitude that can be relatively easily remedied.  After all, it's not a matter of funding or finance, it's just a simple shift in attitudes.  And you're a clever lot, you can easily do that.  So go on, do it.