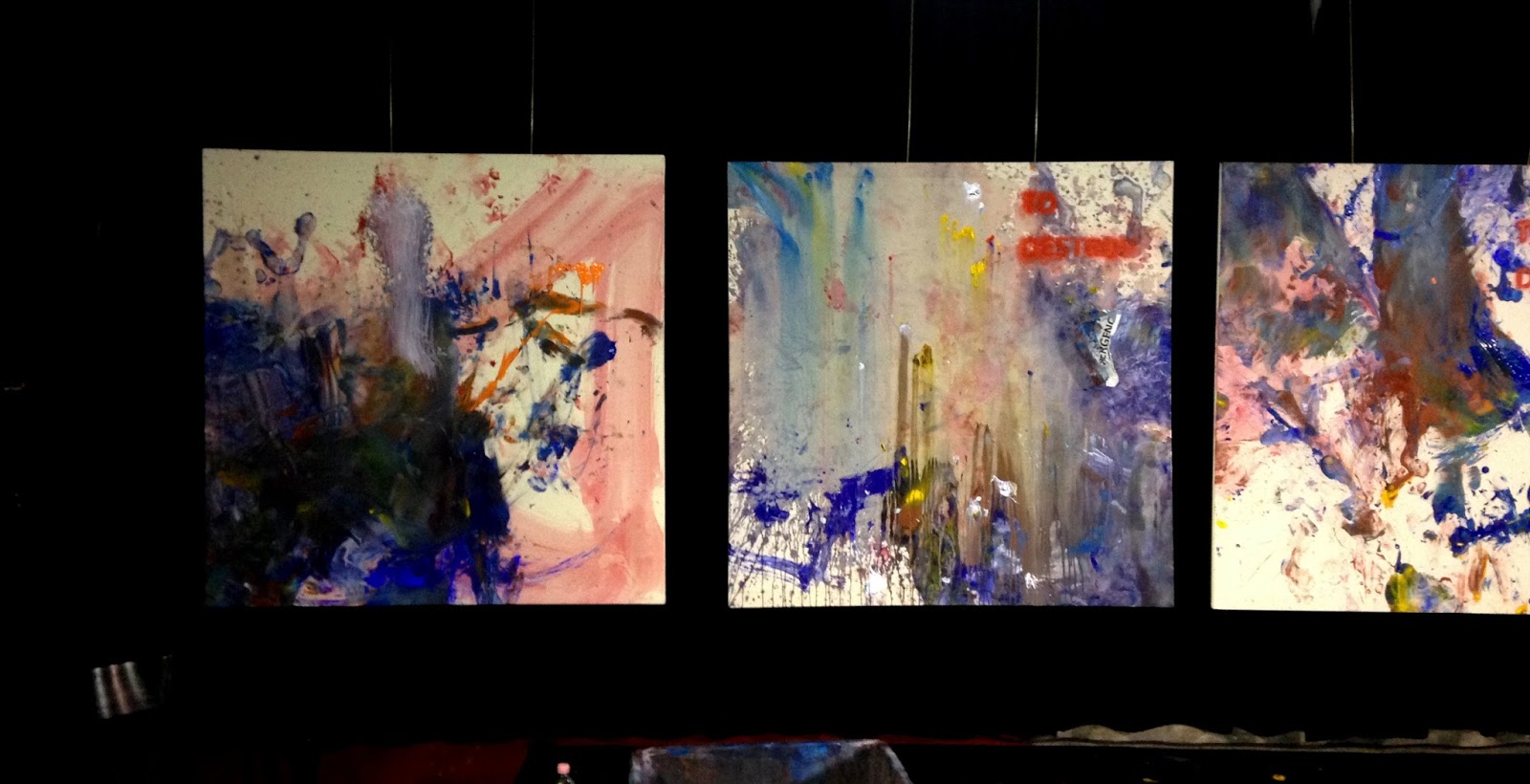 Put simply, Krisztián Gergye’s one man piece, Aukció (Auction), starts off as one thing, and ends up as quite another. The first thing it is is a dance piece, performed to Ravel’s Bolero, in which Gergye – initially clownish and perhaps slightly menacing as he instructs the front row of the audience to cover themselves with the plastic sheeting provided with some glee.

[note: this sort of thing is always slightly off-putting. Two minutes in, and we’re already wrong-footed, wondering just how much crap is going to get flung in our direction. In the event, the sheeting is indeed just a precaution, so maybe not overplaying the “ooh, you’re going to get covered/soaked/etc” angle would have allowed everyone to just watch instead of worrying and not concentrating on what was happening – to the extent of several people leaving or moving to stand right at the back of the space.]

So, yes, Gergye does some more-than-competent contemporary balletic hopping about, gradually covering himself in more and more poster paint. He starts off with red, on his hands at first, then applied to his face, and almost accidentally, it seems, to his bright white tailcoat and high-waisted bullfighter-style trousers. The piece is performed for a while in the glare of red lighting, and I guess there’s even some *content* here which related roughly to ideas of bullfighting and etc. (which makes it the third bullfight-referencing show of 2015 and therefore officially a European trend).

Gradually, the layers of different coloured paints on the dancer build up as he also strips down to his pants. There’s a moment where he’s gingerly stepping around where I was forcibly struck by the idea that he resembled nothing so much as a living Francis Bacon painting of Bez. Which is obviously no bad thing. After a while, he’s painted over his face so much that the initial, ingratiating clowning-face is completely obliterated. Which is no bad thing either since, on an entirely personal level, there’s very little I find more irritating. Now he’s more like a kind of terrible Satanic presence, or perhaps a living statue. His dancing is rendered all the more watchable for it. He dives at the floor, covers himself in yet more paint, rolls around, smacks the floor with water and his clothes, and squirts more paint at it.

A little while after Bolero has finished, the dancing also ceases. Gergye cleans off his painted face slightly, and begins to get dressed, making heavy weather of getting a white shirt on, as paint from his still-painted body and hair soak through the pristine garment. He then dons a shiny suit, with slightly more success, sticks on a pair of glasses, and slicks his painted hair back. He and his assistant then pick up what turn out to be four sections of the originally white floor, and hang them from hooks at the back of the stage, and Gergye becomes the auctioneer, trying to flog these entirely original, new pieces of art to the audience.

Now, perhaps because it’s largely an international audience without the means to get several foot squared of canvas back home, no one in the audience was biting yesterday. Although I think there was also a residual mistrust of the performer and his previous threats to splash us all with a load of paint. Also, because of the ostensibly closed performance up to that point, I think there was also a sense that actually interacting might have been inappropriate – that perhaps the questions here *were* rhetorical, that we’d accidentally up-end the piece if we actually did reply. Either way, the resulting monologue seemed to say some potentially amusing/satirical things about the place of the Hungarian contemporary artist – even if these action paintings, as I suppose we might see them, essentially hailed from the 1960s in the West. (That said, I actually liked the second-from-left one enough to have paid the £24 reserve price (HUF12,000) had I had any means of taking the damn thing home that wouldn’t have doubled its price in the process).

It feels like I ought to offer some sort of conclusion now. But, after having a fairly involved conversation with some colleagues about the relative merits of length and evaluation in reviews over breakfast, I’ve suddenly got cold feet about wanting to pin the whole thing down as “good” or “bad” or even make the point of this review whether “I liked it” or “I didn’t like it”. One of my colleagues said she’d seen the whole thing 15 years ago, and I think my first brush with action painting (no pun intended, ho ho) was a scene in Ken Campbell’s production of Neil Oram’s 24-hour-long play The Warp in 1998, and that scene was set in the sixties, so, yes, nothing new under the sun, perhaps, but an engaging enough way of passing the time...
Posted by Andrew Haydon at 10:56