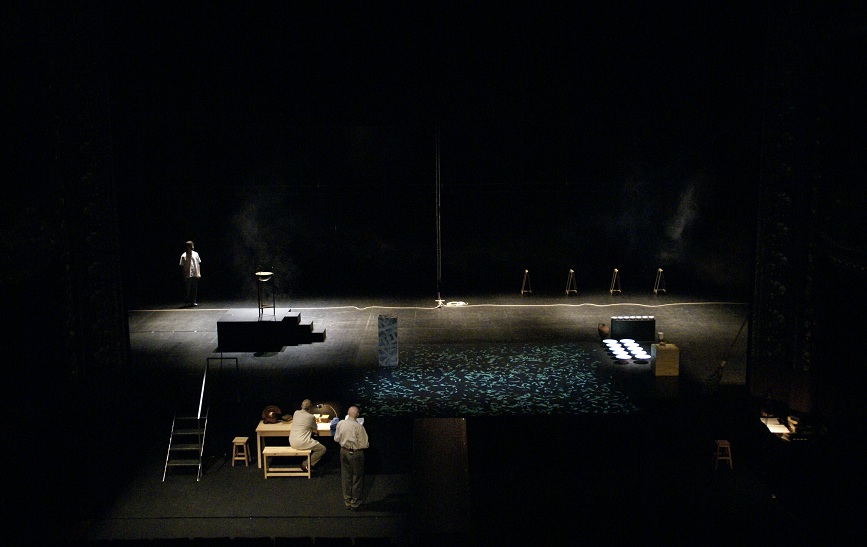 We need to have a talk about the Greeks, don’t we? I’ve just had a look at the plot of Euripedies’s Ion (Íων) on Wikipedia because I didn’t know the play before. Having read the plot, I now maybe see why I haven’t seen the play as many times as relatively unproblematic classic texts about incest (Oedipus) or child-murder (Medea). A weird rape-based, recognition-comedy, foundation-myth is always going to be a bit of a hard sell, right?

Wrong! Last night’s performance of Íon at Teatro Municipal Joachim Benite was totally sold out, with additional guests being crammed into the aisles. But this has a lot more to do with the production than the play. As I mentioned in my first Portugal piece: “Every year the Almada festival is dedicated as a kind of lifetime achievement award to a leading Portuguese theatre artist, and this year it’s Luis Miguel Cintra”. And Íon is his show.

It’s been interesting for the past week finding out context about this festival. This is the 31st edition and, until his death in 2012, the festival was run by its founder Joachim Benite. It’s now been taken over by his long-groomed successor, but, what with the naming of Almada’s main theatre after him, Benite is clearly still casting a long shadow.

Hearteningly, before founding the festival, Benite was a Marxist theatre critic (yup, that’s a theatre named after a critic that they’ve got there). And, most interestingly in this context, when Cintra formed his company, Teatro da Cornucópia, in 1973 (the year before the revolution) the Marxist Benite reviewed their first performance – something by Molière – damning it for its deviation from accepted, Marxist-standard, Brechtian practice. That said, it’s been fascinating the amount of respect and love for Cintra’s work that I’ve encountered at the festival. No one seems to have a bad word to say about him. Imagine a cross between Rylance and Olivier, that’s the sort of level of indisputable we’re talking about here. And his company is also spoken of in terms of its importance. That said, while Cintra does briefly appear in Íon, he’s mostly the director here.

But what about the actual performance/production we here to see? Leaving aside ancient Greece’s abysmal dramatic treatment of women – which I inadvertently did throughout last night’s performance, as I forgot to read a synopsis of the play *before* seeing it, and obviously the entire thing was in Portuguese, so I had no idea – what to say about the production?

Well, the aesthetic is an interesting one. The pre-show stage – which lasts for 25 minutes after the advertised start time of 21.00, prompting one elderly gentleman to completely lose his shit after about twenty minutes and start loudly demanding that the show begin, in such a theatrical fashion that I thought it just had – is obscured by two short flats in the red and green of the Portuguese flag. The shallow “orchestra” before the stage is bisected by a short promontory and one each side is a simple table with a few scripts, props and lamps on this. At these tables sit Cintra and men who look to be his contemporaries – young revolutionaries in 1974, now 60/70-something year old men.

One of these is the chorus/prologue. He speaks commandingly once the thing finally kicks off, and the flag-flats are raised to reveal a curiously “un-designed”, largely empty stage with a few simple elements variously positioned around it: here, some bowls; there, a sort of incense burner thingy; a raised dais covered in laurel leaves; etc..

The dramatic action seems to have enjoyed a similarly laissez-faire approach as the design. Everyone comes on and does their acting in much the sort of way that I imagine “un-directed” British. rep productions of Chekhov or Shakespeare might have been achieved in the 1950s. That is to say, to look at, it seems servicable and nothing more. Coupled with how tired I am (it starts at half nine. It is two hours long without interval. I think I was up at six. First world problems, I know, but nonetheless, not ideal conditions for watching a play in a big, dark, cosy room after a swelteringly hot day), I suspect I’m already not the ideal audience member, even without taking into account my lack of the language.

I do know from a colleague that the show isn’t *just* Ion. There are also bits of direct audience address by Cintra of both things he’s written himself, and of a reading of something written by Pasolini. And, at the end, this song of revolutionary Portugal is played. Now, obviously this might all contrive to create a really strong impression in the viewers most fully alive to all the cultural specificity. However, for everyone else – Italians, Spaniards, Argentinians, me – I think the effect is greatly diminished. I should also record that none of the *young* Portuguese thought much of the staging either. They like the revolutionary song – even if they post-date the revolution. But, there seems to be a strong generational gap between young and old on the matter of staging.

This young/old division – there are curiously few “middle-aged” people at this festival – seems to be an overarching theme of the 31st Fest. The young people, making their shows like Circle Mirror Transformation, and being excited, not only by the Slovenians, but also the perfection and precision of Cheek by Jowl, seem left cold by other work, mostly notably this, not to mention things like . And, talking to Portuguese theatre types even further outside the Festival, it does feel like there is a raft of other work made by companies like Mala Vodora and __ __ which is set completely apart.

Of course, we’ve similar ecological divides in Britain, and even my “alternative theatre” mates quite like the access that the Almada Festival sometimes gives them to a completely different, and unique audience (and yes, it does seem to be largely one audience of the Almada Fesitval faithful). On the other hand, it also seems crucial for me to recognise that the Almada Festival is perhaps best at representing the Almada Fesitval – an aesthetic and *thing* all of its own. As such, as neither explicitly a Portuguese “national showcase” nor a truly/fully *international* Festival – at least this year – the almost exclusive focus is on Portugal, Spain, France, Italy, and Argentina, with Ivica Buljan and Declan Donnellan (the latter already working with French actors and the former making one of his shows with Portuguese). Which, ok, *is* international, but much less so than, say, Sibiu (which included: Russia, China, Japan, and USA, alongside Austria, Poland, Italy, Czech, Croatia and the UK). And there’s absolutely nothing wrong with any of that too. I’m rather enjoying this one-stop-shop chance to see so much southern European work in one place. At the same time, it feels increasingly crucial to recogise that while most of the work is Southern European, it doesn’t represent all of Southern European work.