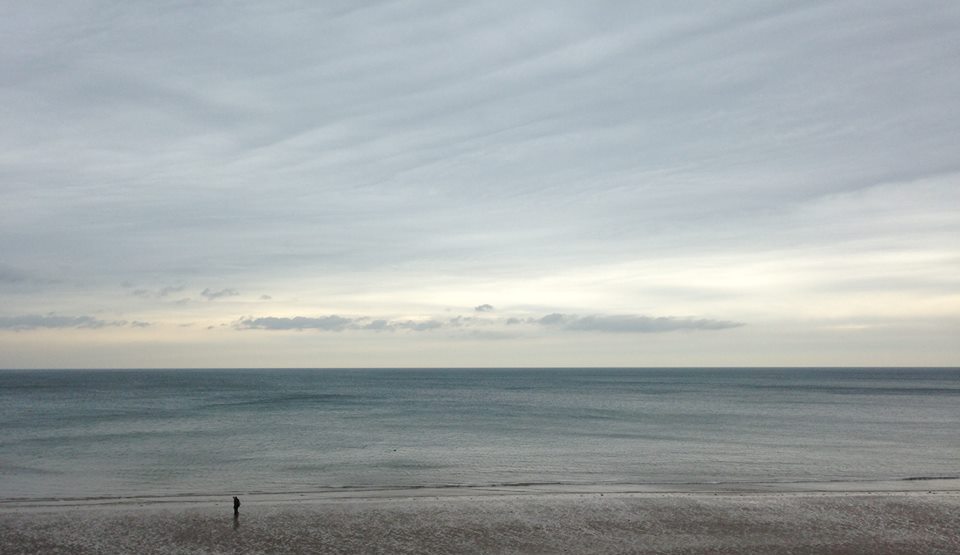 Dear God, this is good. And it’s one of those shows where because so much is good, it’s hard to know where to start.

Idomeneus is a play by the German playwright Roland Schimmelpfennig (here in a properly brilliant translation by international dramaturg and all-round talent David Tushingham). This production has been directed by Ellen McDougall, designed by Jerwood young designer Ana Ines Jabares Pita and dramaturged by Clare Slater (also outstanding sound and lighting design from Jon Nicholls and Lizzie Powell respectively, and, well, I don’t really know what movement directors do, but Joe Wild did it, and the cast moved excellently, so...).

Idomeneus is a Cretan general who was fighting for the Greeks in the Trojan war. His story, like many of the Trojan war, has been prone to interpretation, adaptation, and revision across the centuries. Wikipedia gives a decent straight account of the usual version, but compare that account with the plot of Mozart’s opera Idomeneo, synopsised here and you start to get some idea of how wild the variations can get. And, really, it is the battle for retelling that is really the subject of Schimmelpfennig’s text.

The text itself suggests it be played with “a group of between ten and fourteen men and women. Possibly more” and the designations of speaker tend to be in chorus: “A man and a women. No longer young”, “Four women, four generations”, “A different man and a different woman”, “Six people who don’t understand”, “Five disappointed people” and so on. (Thanks to copying those down, I now really want to see the Buzzfeed version of this text; or perhaps a Chris Marker-like film version of text and stills). Reading the play, it’s very easy to imagine a possible German version – large Barbican-like stage; impossible numbers of people; enormous, regimented choric speaking as in Karin Beier’s Das Werk or even Die Troerinnen.

As such, the first properly great achievement here is McDougall’s staging. Basically, it takes everything that’s really great about German theatre (the liveness, the non-naturalism, the unconcern with psychology, the design) and marries it to a properly English idiom. Which basically translates as “makes it funnier”. Rather than austere monolith poetry, here the text is delivered a bit like one of those Martin Crimp negotiations of a plot/storyline (Attempts on Her Life, Fewer Emergencies). Interestingly, in her director’s note, McDougall suggests that she sees the play as democratic, and that everyone gets to play the king. I have to say, I was surprised by this. Although that sort of passing of embodiment does happen, it felt to me like each member of the (uniformly excellent, unfussily racially mixed) five-strong cast related to a particular character or characters. Mark Monero – physically most imposing, and oldest male – “playing” Idomeneus, Alex Austin – possibly playing down his age slightly and acting watchably nervy – as his son Idamantes. Susie Trayling – the older of the two women; dressed, like Monero, in modern business clothes – seems a shoo-in as Idomeneus’s wife Mena, while Ony Uhiara – who I’ve never seen on stage before, and who is brilliantly charismatic – appears to have the couple of named younger female parts sewn up in terms of majority representation and embodiment. Meanwhile, it’s Jon Foster (previously the excellently apologetic Talthybius in Chris Haydon’s Trojan Women) who seems to narrate the thoughts and motives of the villainous Nauplius and an old fisherman whose daughter Idamantes has seduced and got pregnant. That said, the production doesn’t really get hung up on the idea of of “characterisation”. At root, it is still much more a matter of storytelling, even if we do believe that the figures of the story are being embodied temporarily on stage, there’s still a turn-on-a-sixpence ability for performers to “tag-out” again, and the role to be immediately assumed by another speaker. The speaking-in-chorus aspect is also elegantly preserved with multiple voices sometimes speaking at once in polyphonic echoes, often making communal property of the words. And it’s all executed with spectacular intelligence and style. I mean, it really is some of the smartest directing I’ve seen this year (any year really).

Added to the stylish delivery and performances is the blinder of a set that Ana Ines Jabares Pita has created (henceforth Pita until I’m told otherwise). We’re in traverse, which ordinarily I hate. Here just doesn’t make a blind bit of difference as the stage action is so compelling, and the lighting such that you basically don’t notice the people opposite you once. The stage is a raised black block in the centre of the room into which is set a shallow waterproof area. Above this hangs, upside-down, a large-ish, white, scale-model of an ancient Greek warship. The design, however, I think extends beyond this to the execution of the mostly monochrome costumes – the two younger characters I guess are a bit more colourful, but hardly “bright” or garish in any way. Also a key part of the design – although it’s impossible to tell from where the impulse came – are the other materials employed in the show. There is black ink, often diluted, sometimes no, poured over “characters” to indicate blood. Elsewhere there is chalk and chalk-dust (and some perhaps slightly too-perfumed talc). More monochrome, a gradual accretion of stage-mess, and, crucially, all literary instruments, tools of the school-room, or the writer, of how a story can come into being and might be preserved. Here they stand in for the trappings of death, for weapons, poisons, and blood. Throughout, both the stage and the characters costumes become gradually more stained as version after conflicting version of events take their toll. Idomeneus dies six or seven times in different ways at different points in the story, as part of this constant process of negotiation and renegotiation.

Inevitably, landing so close to Mr Burns, and to an extent Tim Crouch’s Adler and Gibb, Idomeneus opens yet another front in the consideration of how and why we tell stories.

The Mr Burns comparison is perhaps the more fruitful. Indeed, it very effectively renews that Žižek point about ideology where he uses toilets as an illustration, re-drawing the comparison to that between Germany and the United States.
[And I’m indebted to a conversation with Matt Trueman yesterday for getting me started on thinking about this. I think I’ve repeated a couple of his thoughts below, along with my own]
After all, the basic point of Mr Burns is that there is a definite starting point. There is an accurate truth which is being forgotten (the Cape Feare episode of the Simpsons). It would probably challenge most of our assumptions about objectivity to claim this were otherwise. Being a drawn, televised, reproduced item, it feels that Cape Feare can be regarded as the definitive article, and the play explores how memory of the definitive is unreliable. Idomeneus, by contrast takes its cue from the other end of history. Rather than starting with something definitive and looking into a possible future, it takes an aspect of the oldest work of “western” literature – a written account of what might have previously been a tale from an oral tradition, telling the story of an ancient (even then) conflict between bronze age generals in the middle east – and situates the telling of it in a theatre in the modern world. And, rather than a the being a sense of haplessness attaching to what gets “accurately remembered” and the myriad “true” aspects of a definitive article which get lost, seemingly at random in Mr Burns, Schimmelpfennig takes precisely the opposite tack – that the stories we tell are a matter of negotiation: social and civic responsibilities. That we see “society” represented here, engaged in a sometimes savage fight to work out the story – not because there’s a “true” version, but precisely because there’s not. It’s also fascinating that whereas in Mr Burns we see the trappings of an entertainment industry *around* the attempts to tell the story, whereas in Idomeneus, we the audience, and the theatre itself, and the performers and etc. are those trappings. It is perhaps on one level an attempt to render invisible the unspoken labour relations on which all theatre rests, but I think it also accords closely with the fact that in Germany its heavily government-subsidised theatre is already seen as a civic good, rather than a branch of the entertainment industry that needs to tout for trade to remain economically viable. None of this is a criticism of Mr Burns, by the way, indeed, it makes me appreciate just what a canny critique of American consumerism it really is, even, possibly, at unconscious, yet still very legible levels. It’s incidentally also interesting to me that characters in Mr Burns are named individuals, while Schimmelpfennig’s speakers are simply members of a society, denoted mostly by age, gender or perhaps a quirky aspect.

However, all this sort of thinking really turns up post-fact. Sure, it’s all present in your mind as your watching the show, but most of (well, my) attention is taken up with the dual tasks of trying to keep hold of the facts of this increasingly slippery narrative, and with watching the intensely eloquent staging. I might be wrong, but it seemed to me that the visuals of the show also contained many allusions and quotations. My two favourite moments were a) when Idomeneus (Monero) is murdered – a process in this instance illustrated with his having several glasses of water dashed over him (see below), including ones which have been innocently put in the hands of audience members in the front rows (heavy hint that we really are all in this together and ethically implicated); the other moment, b) is when Idamantes and Electra (yes, that Electra), are kneeling together and, thanks to the ludicrously soaked stage, he spins her round as she kneels – an almost exact quote from Dave St-Pierre’s Un peu de tendresse bordel de merde! (which might be coincidence, in which case, cool; or it might be deliberate, which might even be cooler). There’s even a bit where a monster (yes! There’s even a monster in it) is preposterously, marvellously created using five balloons, and McDougall might even be quoting her own staging of Henry the Fifth here.

But, yes. This is a ludicrously good show, and one which, along with ...Goya... and Grounded demonstrate that Chris Haydon’s Gate is – along with the Almeida, the Royal Court, the Unicorn and the Young Vic – one of those venues that is making it feel like there’s a revolution going on in the London theatre “mainstream” that is making long overdue changes to our assumptions about what theatre can be.

Indeed! Amazing show. Need to shout loudly about it. Thank you for this review - now I can explain my friend why they must not miss it:-)