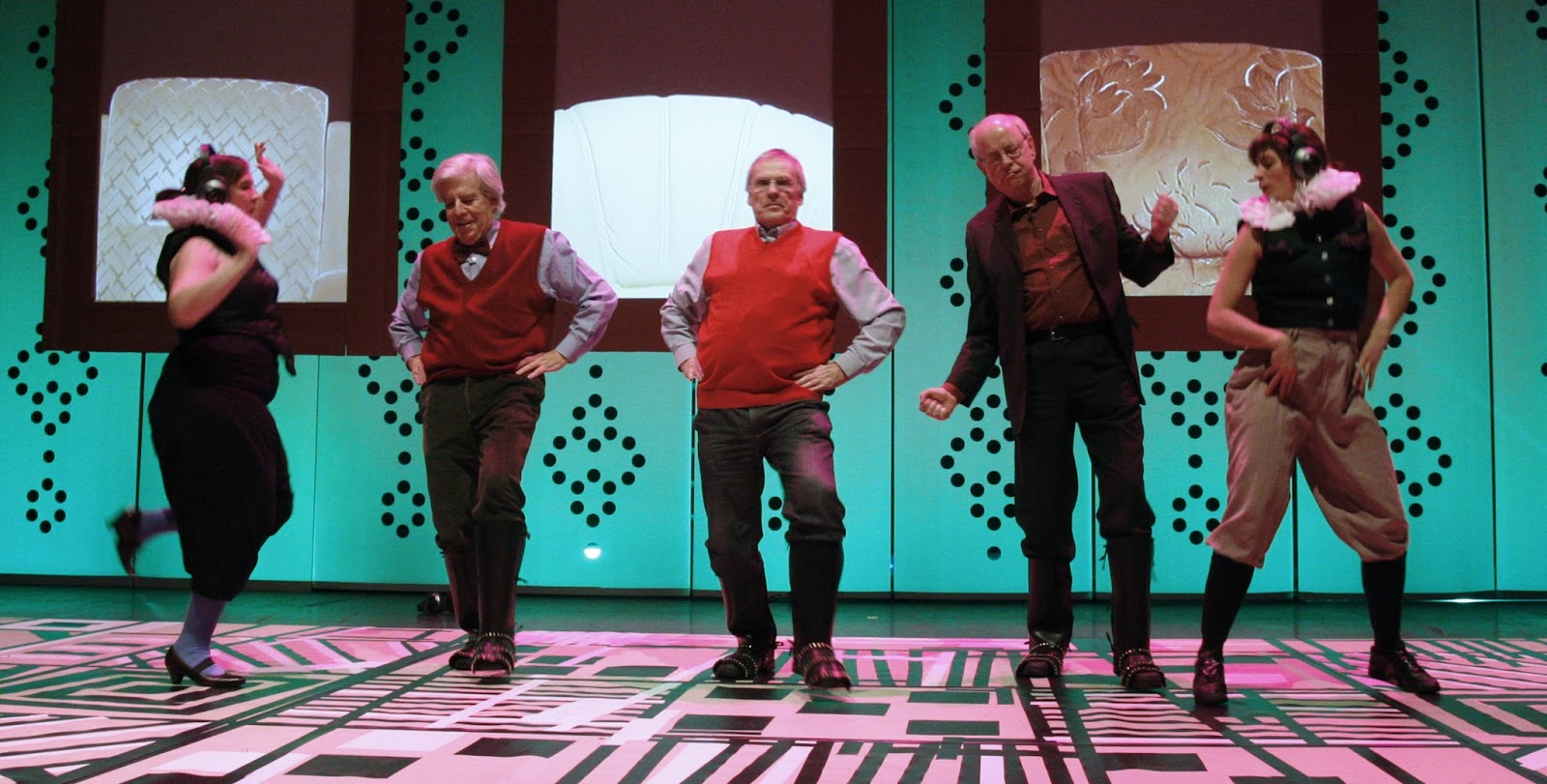 I loved Testament, but it turns out to be one of the hardest things I’ve had a stab at in a long while. As a result, he following is possibly a bit of an experiment in form-following-form postmodernism.

I first came across Germany’s She She Pop at the 2008 Baltoscandal festival in Rakvere Estonia, where they were doing their 2004 show Why Don’t You Dance? (Warum Tanz Ihr Nicht?). I can hardly remember it at all: it didn’t make a big impression on me at all. Testament premièred in 2010 at the HAU theatres in Berlin. I was living roughly 10 minutes cycle-ride away from the theatre at the time, and yet it has taken me four years to actually get around to seeing it (including missing it in London last month thanks to being in Romania).

(Other nice contextual information: She She Pop are apparently from the University of Gießen, where Hans Thies Lehmann teaches, and where Rimini Protokoll and my mate Anna Teuwen from FIT also trained; an apparently magical place like QMUL, Dartington and Goldsmiths all combined with the effect of completely re-wiring of one’s sense of theatre forever.)

Testament is She She Pop’s take on König Lear. It consists of four members of the group (three female, one male) being on stage with three of their fathers. The piece semi-methodically works through the scenes of Shakespeare that include both Lear and his daughters – of which there aren’t many, given that they’re necessarily apart for most of the play. Indeed, the running time here (2hrs) is probably significantly longer than the scenes under discussion, but still – mercifully – half the length of Lear itself.

On FB yesterday, after I’d posted an update wondering what a particular song was, the following discussion took place:

Peter Boenisch: “Re: the song – it's a different one for every performance, just as the performance exists is different permutations of performers and their fathers. It depends on the availability of fathers and daughters. No idea whether the same pairings travelled to London than to Portugal, or where you are. Many general segments are the same but some are between the individual daughter and father, quite obviously, so the girl with the Greek background has a different 'dad's favourite song' than others.”

Holger Syme: “To add to Peter's point above: they have also staged the show with actors (or at least one actor) standing in for daughters, which I find both intriguing and problematic (especially as they didn't announce the fact when they performed it this way in Toronto). The fathers are always the fathers. “

Francisco Frazão: “I'd find it very odd if they really used an actor in Toronto. I imagine they did the same thing there as they were forced to do in Lisbon: because one of the announced fathers (Manfred) wasn't well enough to travel, he was replaced by another father (Peter); and the daughter who was already coming (Mieke) played Peter's daughter (Fanni). This was all decided the week before the show, and we had to change a lot in the surtitles because of it. Actually, the performance allows for this, when it discusses the difference between a character and a "position": Peter isn't being Peter onstage, but he can perform the position of "Peter" better than an actor; and Mieke was able to do the same with ‘Fanni’. ”

HS: “Well, by 'actor' I do mean another member of the company, but not (as in Mieke's case) another daughter -- as far as I know, the performer joined She She Pop after Testament had been created (I'd have to dig out my program from two years ago to check). But while I think you're right that 'Peter' isn't Peter, literally, he is always played by Peter (right?); whereas 'Mieke' or 'Fanni' or whoever can apparently be played by other members of the company. (And if I remember what Mieke told me correctly, there are passages of the script where one child's conflict with a father is switched to another -- I think there's a section where what she and her father are acting out is actually a problem between Sebastian and his father. Does that sound familiar?)”

FF: “I would be curious to know what was the solution in Toronto, and I also think that there is a difference between the performers, in that a father wouldn't explicitly play a different father - something that has happened with the daughters. But I know for instance that the speech about the three ways of leaving an inheritance, with the accompanying graph, can be made by either Manfred (who's a physicist and does a more elaborate version of it) and Peter (who is an architect) - so in a way Peter would be playing "Manfred"... And I'm sure, like you say, they need to switch around other sections, like the ones where they repeat the dialogue in rehearsal, depending on who is on stage. What helps me interpret these permutations is their statement that they use autobiography not as content but as a method - for reading King Lear, for instance. An entirely different kind of 'method' acting! ”

Even if the details seem obscure if you haven’t seen the piece (and hell, it feels like quite an obscure discussion to me and I have), it gives you an idea of the the level of complex “reality” at which the piece functions.

Rather than trying to “stage the play”, the scenes created by the group explore their own relationships with their fathers through a series of what might almost be called exercises or illustrations. As we see from above, the fathers are “really” the fathers of the regular performers in the company, but they don’t always necessarily “play” the father of their own child. Get that? Got that? Good. They also read from the (German version of) the play. (And, yes, it’s true; Shakespeare does sound better and make more sense in German.) There’s a lovely bit, married up to the point in the play where Lear turns up at Regan’s house (or Goneril’s can’t be bothered to look it up) with 100 of his men and asks to stay, where one of the group shows what would happen if all the bookcases in her father’s four-floor West German house were moved into her (not small) Berlin apartment.

At another point a father delicately, falteringly sings “I Will Always Love You”. To be honest, its one of the most heartbreaking things I’ve ever seen on a stage. The quiet attempt to maintain dignity by this small German man singing as quietly as possible into a very loud mic, perhaps partly milking the effect deliberately, but also – because shown in live-feed camera, also focussed on to such a degree that we can see every tiny tremble and flicker across his face – somehow all the more real for it, all while doing something ostensibly comical and silly... And, at the same time it seems to manage to say everything about both parental love and the death of Cordelia (which I think was the section it was attached to). So, yes, blimey.

Elsewhere the various fathers share their own favourite records (I assume favourite, anyway). From one’s pick of a classic bit of German ersatz rock’n’roll, to the Greek immigrant's choice of Ειμαστε Δυο by Μικης Θεοδωρακης this section also feels pretty magical. Especially that Greek song, which seems to magically communicate probably the reason he wound-up in Germany (the song is an anti-dictatorship song from pre-revolution Greece) a much as anything to do with his taste in music.

If I had a small gripe with the piece, its that it contains so many apexes, so many gorgeous crescendos, that it felt like there were several false endings. Small thing, really, but interesting. Nevertheless, I was really content that it just kept on going and expanding. I was also happy because, since nothing at this Festival has English surtitles, here was something that I could actually understand (pretty much entirely. Possibly not subtleties and minor details, but...).

So, yes. Beautiful, tender, intelligent searching piece of work – facts that I fear this review entirely fails to capture.