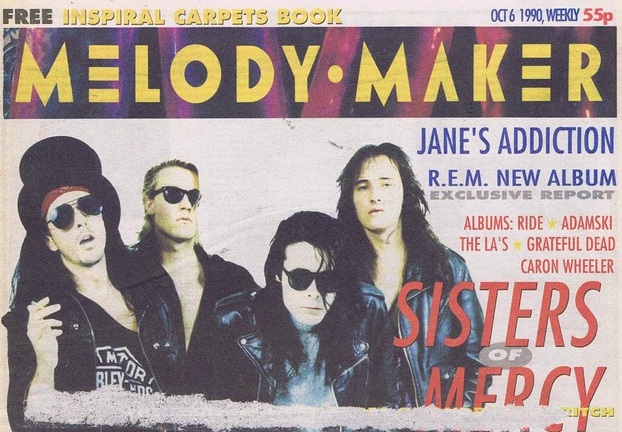 The other afternoon, I happened to read this article in The Quietus. However, it’s not the review that interests me so much as the introduction. You should really just click through and read the whole thing, but here’s the relevant bit:

“In my mid-teens, I had Swans down as a byword for extremity without having ever heard them. Every week, the front matter of the NME would contain half-page ‘looking back’ feature, tellingly positioned adjacent to the new bands interview, in which a writer would pick an act, usually critically acclaimed but not publicly so, who would help the paper’s younger readership make sense of – build a historical narrative about – their obsessions du jour. ...if you strung the pieces together in a scrapbook it would look like the minutes of a brainstorming session for a Death In Vegas record. I remember reading about Suicide first in here, trying to figure out how an eleven-minute drone composition about a man killing his family would actually sound... My idealised auditory image of this music made it sensational, world-altering, and this was never more the case than in that of Swans.”

I suspect Joe Kennedy is a bit younger than me, and I was a Melody Maker reader not an NME reader (which, funnily, used to be quite *a thing*), but the most important thing for me here still holds: the idea of *reading reviews* being the *only* access to the music. Because *obviously*, being a teenager in the 90s there was no access to YouTube or Google: they didn’t exist. There were three main ways to hear the music that I was reading about – buying it (unlikely: buying it involved a) money, and b) somewhere to buy it from), hearing it on the radio (unlikely: it wasn’t exactly radio friendly, most of it), or, c) hearing it at a club, or seeing it played live (Club: unlikely, DJs at “alternative” clubs tended to favour the same floor-fillers week-in, week-out – they were places for dancing, not checking out new albums; and, Live: well, standing up while people dive at your head from the stage is not a good way of *listening*). And that was it. No instant anything. No way of wondering if something was good and just finding it on your phone and listening to it (Your phone, for Christ’s sake!).

Now, I don’t want to be Buzzfeed’s 31 Things Kids Today Will Never Understand (V.G., btw), and – Jesus – I really do hope this isn’t an early manifestation of some sort of horrifying Nick Hornby-style mid-life-crisis phase in my writing (although, I guess the money from the movie rights for that wouldn’t kill me). But.

It definitely explains why, now I’m “a critic” (for want of a less-pompous sounding word), I think there’s any earthly purpose in my going and seeing, and writing at length about all these plays in Germany and Romania and Portugal. Because not actually being able to hear the music or see the bands didn’t really deter me from buying and reading Melody Maker every week. And, moreover, me and my mates didn’t stop at just *reading* Melody Maker. We also formed bands (terrible bands) based on the music we read about. I’m pretty sure I was in at least two bands inspired by Throbbing Gristle before I heard a single thing they’d ever recorded. Because the idea of them, the idea that this other thing existed, just seemed absolutely crucial to me. Then and now, I guess.

The other reason is advocacy. If no one had been writing about all that music then it may as well have not existed as far as I was concerned. But, thanks to some people just about putting the idea of it within reach, it gave me something to look forward to, or something to try to find, or just a huge bunch of information about it – written with people with such an obvious, unrestrained, unembarrassed passion for and knowledge of this stuff that it was a pleasure in itself. Which is about as much as anyone writing about something can ever hope to aspire to, I think.

Or, as one of the characters in Dan Rebellato’s Static has it: “Music isn’t just music, it’s also everything else.”