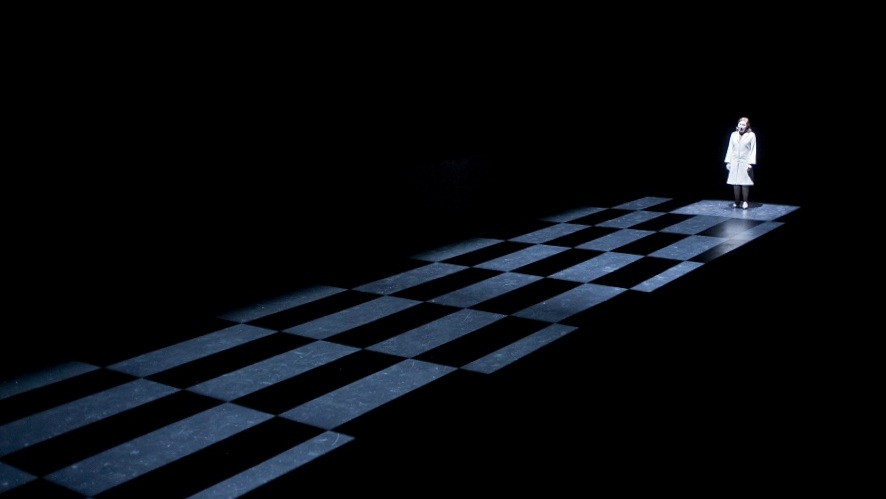 Having exorcised, or at least confessed, a load of my worries about my fit-for-purpose-ness in terms of me covering this festival yesterday, it was a relief to come across a show where none of those misgiving were really remotely relevant.

This is the first thing I’ve seen by Joël Pommerat, but the fleeting presence of Young Vic artistic director, David Lan, at the festival – just to see this show – gives you some idea of the sort of level of European/international talent we’re talking about here. And I also thought it was pretty good.

La Réunification... is played on a very long, narrow, black traverse stage – here constructed on the stage of Teatro Municipal Joaquim Benite’s main house (like Blackwatch at the Barbican, but thinner). And, my God, Éric Soyer (both lighting and set, interestingly) could teach everyone who’s ever lit a British show in traverse a thing or too. You could barely see the opposite bank of audience despite the fact that they were only a few metres away. The whole piece is played in striking levels of darkness – the blackouts themselves really are black, brief, and whole sofas, large armchairs, and even beds silently appear and disppear within seconds. (Apparently the company made night-vision films of themselves doing the scene changes to learn how thy could get them faster and now they’re pretty much just muscle memory. Ordinarily I think blackouts – especially furniture-moving blackouts – are the worst thing since traverse staging: here they acquire the interest of a conjuring trick.) So, yes, the look of the thing is essentially stark, slick, modern, and often involves a few chic pieces of Heals-looking furniture magically turning up.

Onto this stage spill successive, unrelated scenes. In fact, it’s like nothing so much as a very French Love and Information, albeit with longer scenes and fewer of them. Even the milieu feels similar – largely middle class couples playing out stock scenes from romantic comedies or tragedies (a bride in her wedding dress gradually discovers that her husband-to-be has been intimate with pretty much her entire family; a sex-worker offers not to charge a man for sex, then does; a teacher argues with two parents that nothing happened when he shared a bed with their child, and so on...). Of course, the accretion of such scenes creates a feeling of investigation, or deconstruction. By and large, I understood what was happening in each scene and what everyone was saying (my French is much better than I thought it was. Phew). What my French doesn’t run to is spotting the literary merit and the moments within the show where suddenly the register would shift and in the midst of the trite truisms and stock phrases of courtship or break-up something – according to one of my Portuguese colleagues – shining, breathtaking and true would suddenly turn up and flatten everything.

This information certainly allayed my main reservation while watching the piece: that it might all be a bit middle class. And I do wonder, if the emphasis is so much more on “love” than, well, ideology, I suppose, whether I mightn’t still have had a tiny reservation about it. But, without it being in English (I’m not sure if even surtitles would have done the job here), then it’s impossible to say. It might contain those critiques too. [edit: another Portuguese colleague who saw it last night just expressed a lot of reservations about how “manipulative” he thought the show potentially was, in terms of it’s use of music and situation to create a kind of tear-jerk effect. I’m not sure I fully believe that either, but it’s interesting to hear such a contrasting perspective.]

In terms of plotting the piece on the international scene, it seemed to me to be like how you might imagine a particularly stylish, French, auteurial take on Attempts on her Life could feel. It has “international festival circuit” written all over it, and is absolutely no worse for it. Indeed, there was something hugely reassuring about the brio with which bold choices had been confidently made.

The acting is good, too. Although, basically just really raw, truthful accounts of often heightened emotions. So: French, basically; perhaps. More striking, although perhaps already something of a visual cliché, is the kind-of androgynous Elvis figure who sings, unaccompanied, in a couple of inter-scene breaks. I have no idea off-hand if s/he was played by a man or a woman, or the costume was used by more than one performer. The first “song” is deep, haunting, like a pitch-shifted Anthony and the Johnsons, perhaps. Another more alto, but similarly husky and tortured. (These bits, btw, if they had words, I didn’t pick up on them).

Although hard work without surtitles, this is imaginative, intriguing work. You could totally imagine it turning up a the Barbican (it’s quite new, so probably in about five years or something, given the Barbican’s current ability to effect up-to-date programming) and everyone quite liking it. Beyond “quite liking” and recognition of an undeniable level of quality I think it’ll be down to individual tastes how much beyond that the appreciation goes. One thing I will say, though, as far as theatre goes, Žižek’s characterisations of European nations according to toilet-design and philosophy seems to be totally off- as far as French theatre goes. Perhaps there is a certain statement-led violence about the language that I’m missing, but on the whole this feels far more cool and contemplative than violent and revolutionary.

Would be interested to hear just how wrong (or right) these perceptions are. Hmm. 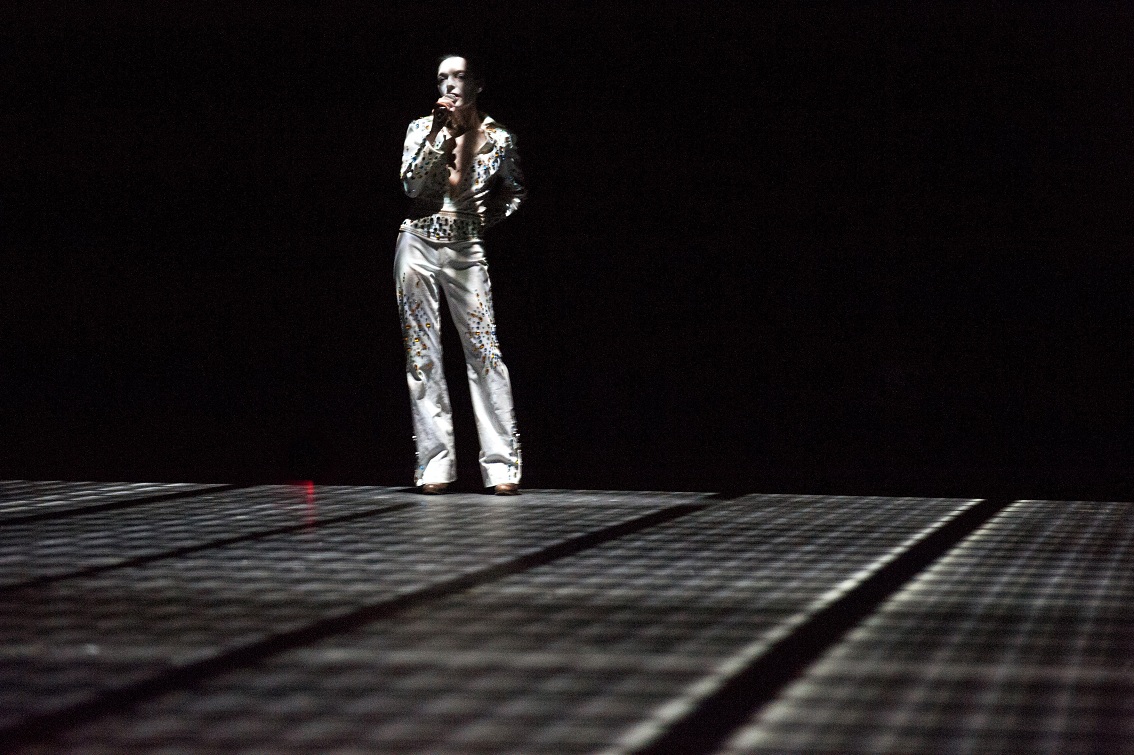 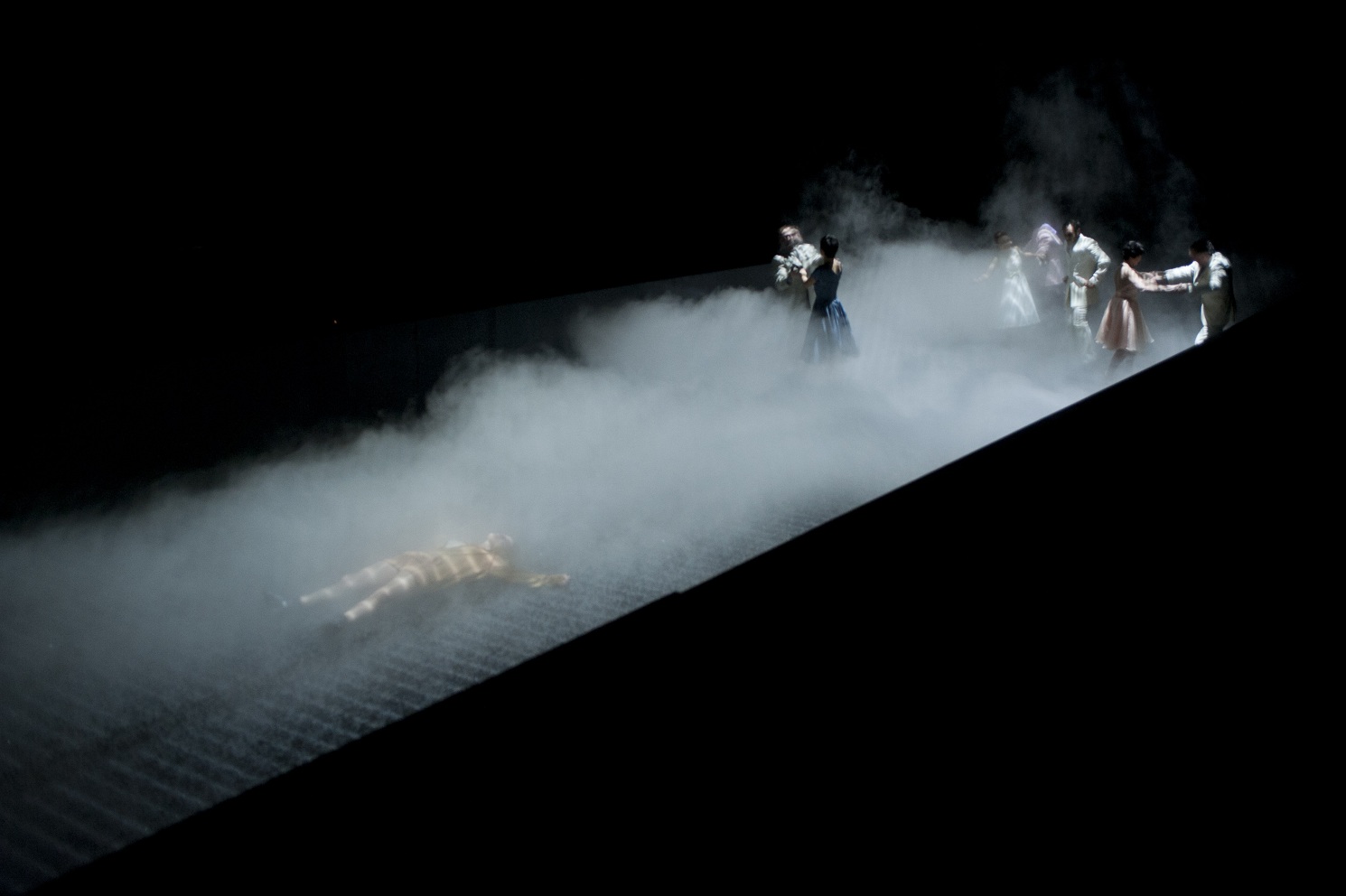