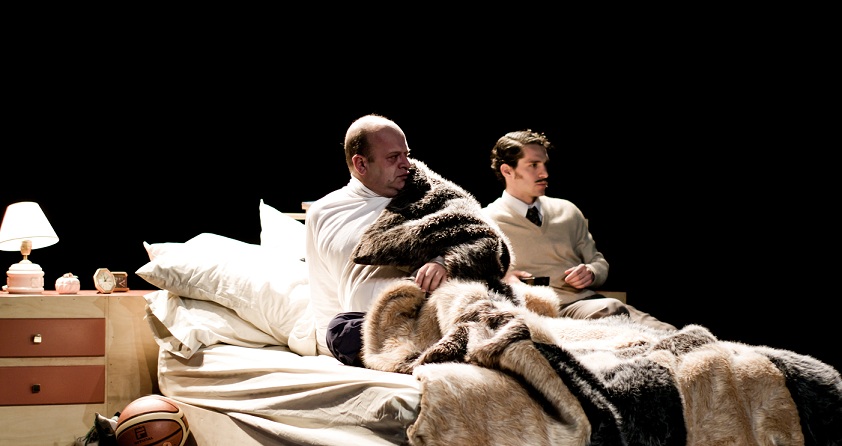 Might as well get the obvious jokes out of the way first. This is a play called “Germany” being performed by a company from Argentina. Actually, I’m not sure what the actual joke would be. Possibly, given the production, something to do with evidence of the latter party being sore losers...

In terms of the actual play, “Germany” here seems to occupy the same sort of geographical irrelevance as Alaska does for Pinter. Or rather, it’s less a place and more a state of mind. The programme suggests: “Germany appears as a remote place, inaccessible to this family living their last days stagnating in a single place, like an organism that grows unmoveable over water on some forgotten bucket in some remote patio. Habitat-room, bed-aquarium where – it is fair to say – the whole work takes place. A place from where the father unexpectedly returns after his wife’s suicide, to which he will refer as his place for true happiness. There in Germany, one can live in peace, it all happens orderly, unsurprisingly.” [all sic]

Reading that, you might expect a rather sombre, indeed Pinteresque, piece: all peeling paintwork and endless pauses. You would be wrong. The tone of Alemanha is remarkably upbeat and the setting – a large, bright-red-carpeted bedroom – lit in such a way that the whole thing looks remarkably like an American daytime soap opera from the eighties.

The plot – obscured once more by delivery in Spanish, with Portuguese surtitles – concerns an older, bald bloke in a bed; his son(?) and his son’s wife and their son, Fred. And, well, it might as well be about how his whole family goes mad when his magic shoes lose their powers.

I did spend as long as humanly possible concentrating on trying to watch this sensibly. I really did. But, well, broadly speaking it’s a naturalistic comedy played out on one of this carpeted squares with no walls but all the furniture slap bang in the middle of a black stage (but lit so brightly that the glow off the carpet illuminates the faces of the back row of the stalls perfectly). I tried to get an idea of the plot: nope. I had a stab an wondering what the central conflicts were: not a dicky bird. I vaguely tried to work out what any given character’s deal was: nada. Even having scrutinised the programme notes I had literally no way in and nothing to look at by way of compensation. My fault for not knowing Portuguese, granted; although I’d be doing myself a disservice if I didn’t record that a good dozen (at least) Portuguese people left throughout the show.

I will say that the acting seemed pretty good, although the same strange “relaxed” atmosphere on stage prevailed. If I’ve learnt anything a this festival it’s that we British (and most other more northern and eastern European countries) are *really intense* about things like *energy* and *focus*, and that even if “acting convincingly” as this cast seemed to be, the idea of “commanding attention” is hard-wired into our theatre so much that it looks like a terrible category error when it’s missing.

Obviously I can tell you nothing about the text’s success or the prodctions fitness-or-otherwise to the task of bringing it to stage. I can say that the thing it most reminded me of was Peter Hall’s revival of Alan Ayckbourn’s Bedroom Farce in Richmond. There, of course, the seventies-look of the thing was deliberate. And maybe it was here too. But I do think, an Argentinian without a word of English would have been able to follow (and even enjoy, if Bedroom Farce was her sort of thing) that production a lot more closely than I was able to follow this.

I am finding this question of what you can and can’t watch/get anything from in another language increasingly fascinating as this Festival of the largely incomprehensible draws on. Because, as I said before, I can do watching theatre in languages I don’t speak. I wonder, then, if the difference is between watching theatre and watching plays.
Posted by Andrew Haydon at 14:13