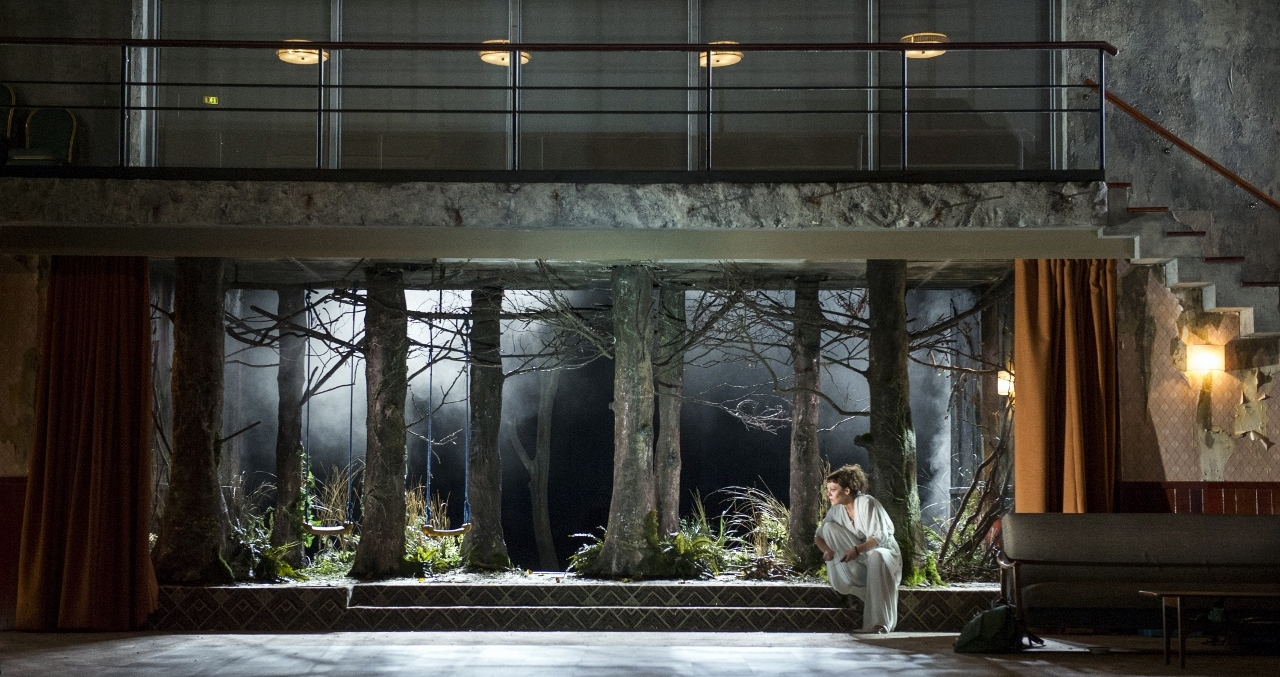 If theatre is as “tribal” as it suits some people to make out, then my glowing five-star review of Medea should have been a foregone conclusion. In theory it’s got everything I could possibly wish for: Tom Scutt’s set echoes Alex Eales’s design for Katie Mitchell’s Alles Weitere... in Hamburg – a widescreen, two-storey, peeling and decaying mansion, here updated from timeless European splendour to a muted seventies feel. It even throws in the forest from This is How You Will Disappear as the trees-inside-the-room thing that was also seen in Mitchell’s production of Written on Skin (which I’m fairly sure is an instance of cultural energy swirling around rather than actual “inspired-by”-ness). Choreographer Lucy Guerin’s work with the chorus conjures the same Haitian Voodoo dances as Sebastian Nübling’s production of Morning (which, again, I doubt she’s seen), or, if you want to know what it looks like: the video for this awesome cover of She’s Lost Control by Spoek Mathambo. And, at the opening, Michaela Coel’s presentation of Ben Power’s prologue (after Euripides) suggests a reasonably astute, modern, demotic-but-still-majestic-and-a-bit-poetic take on the text. And, yet, for some reason, for me it just didn’t work at all. (Sorry, no, that’s not true: I think within the 90-ish minute running time there are possibly three minutes which are really great and several which are entirely passable, but as an aggregate: not so much.)

I should say at this juncture, it possibly “didn’t work” at the level of *exacting, theatre-nerd reasons*, and anyone normal is probably going to be fine watching this. I reckon they might experience that weird sensation of slippage between how good they think it’s meant to be and how much they’re actually feeling it, but they’ll probably be fine overall. But that’s why they don’t let normal people review theatre. I should also note that seemingly without exception, *all* the mainstream critics seemed to 4-star it (I haven’t read any of their reviews, there’s just a long list of 4-stars and newspaper titles on the NT’s Medea page, from which I’m getting the cast and creative info... But as I remarked about something else, post-Weekus Mirabilis MSM approval really can’t be held up as shorthand for hopelessly reactionary, wrong opinion. And besides, it’s nice that they all liked it, right?)

So what’s gone wrong? Well, the basic problem here is that the show feels like it’s pulling in a million different directions at once: more spider-diagram or brainstorming session than the finished product. And, yes, there are instances where that kind of feeling can be deliberate and yield great results. Here it feels too diffuse. Rather than prompting different thoughts which each unlock new ideas about the text, the thing instead seems to cancel itself out or contradict itself.

At the centre of this big old mess is Helen McCrory. As I’ve said, given the track record of Carrie (Birdland, A Doll’s House) Cracknell, Tom (Mr Burns, Charles III) Scutt, and Ben (Faustus, Six Characters...) Power, one not unreasonably expects – and visually and sonically gets – the best of new young British theatre, inspired by the likes of Katie Mitchell, Thomas Ostermeier, Rupert Goold and and Pina Bausch. All of which counts for very little if the actor at the centre of whole thing is going to turn in a performance that hails from the School of Generalised British Acting. It’s hard to know for definite what’s failure of nerve and a desire to crowd-please to the largest number possible in the Olivier, and what’s a result of an actor’s “I know best” attitude, but from seat M4 in the stalls, McCrory communicates next to nothing save for some moves that look a lot like a generalised idea of what acting should look like. At no point does she convince on either a human or a mythic level. Which is kind of a pity. If you catch yourself thinking “well, this is my fault for sitting so far back...” something’s gone wrong, right? But then, Christ, I’ve seen Simon Russell-Beale from the back of the *circle* in the Olivier and felt what he was doing as vividly as if he were a foot away. And, actually, I bought this ticket and it’s come to something when you think: “well, I guess you can’t expect much for £25. I should have gone to press night and let myself be put in a decent seat if I wanted to give this a fair hearing...” That said, at least McCrory is doing *something*. Even if it is A Lot Of Acting, it’s a damn sight better than Danny Sapini, who, in trying to dignify his Jason as a stoic, noble, kingly warrior somehow winds up as an emotional void, arriving from the death of his wife by means of a poisoned cloak with all the terror and agony of someone who wonders if his ex-wife has accidentally-on-purpose taken the spare car keys.

There was much fanfare about the music which has been written by _ _ and _ _ of Goldfrapp. Annoyingly, Goldfrapp are famous for sounding like this, but, perhaps because they’ve been asked to write music for a theatre, most of the music they’ve written sounds like totally bog-standard theatre music, some which is even played live of fiddles and accordions. (Fiddles? Accordions? Goldfrapp? What?) Admittedly, the fiddles and accordion bits of the music make a sort of sense alongside the vaguely modern Greek/Balkans bits of the the look of the thing (are we meant to think about the Greek dictatorship of the seventies? We could do that), which obviously makes several kinds of sense in the abstract, although on balance I’d have probably been more interested by a sleazy goth-disco T-Rex-soundalike version of Medea than this one.

Medea is a difficult play to make emotionally engaging, but also, curiously, one which no one has really managed to figure out a way of making say anything *useful* about *society*, so it’s a really strange thing to keep seeing. Because, at root, isn’t it just a fairly piece of pretty anti-woman propaganda, saying that they’re well nuts and a more than a bit witchy? As such, it’s strange to see Carrie “Blurred Lines” Cracknell trying to reanimate this mad, misogynist, old corpse with a bit of voodoo dancing.

Loving the review Andrew. Amazed to find somebody who liked this bombastic mess even less than I did. Keep up the good work!