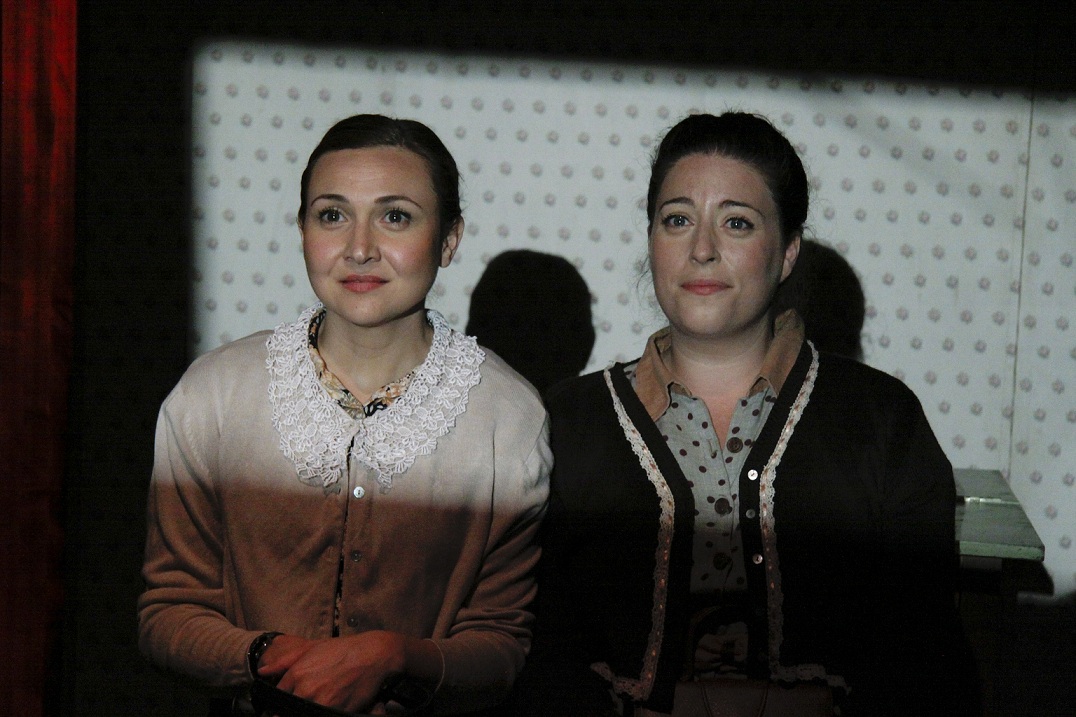 Argentinian company Cine-Teatro Constantino Nery’s Impalpável (translated in the programme as “impalpable”), is as fascinating an experience (for me) of cross-cultural incomprehension and otherwise as it’s possible to imagine.

Based on the works of Manuel Puig (of which I’m dimly aware at best; he wrote Kiss of the Spider Woman, right?), it’s described in the Festival programme as a “hidden gem of alternative theatre”. And, having seen it, I can kind of see what they’re driving at. The piece is squarely situated in “devised, fringe-theatre -land”. What’s interesting is to see such a show – imagine anything with a single-wallpapered-flat-with-two-doors-in-it-as-back-wall (anything from the Old Red Lion will do) – put in the centre of the stage in the Lyttleton (ok, the main house at Fórum Romeu Correia is slightly smaller than the Lyttleton, but you get the picture). So, I have to start by saying straight-up congratulations to the company for not just getting lost in the space with a show that I can only presume is used to playing venues roughly an 8th of this size. Credit then to performers Elisa Bressán, Malena Schnitzer, and Paula Manzone.

Just before the show, I happened to have been reading Doon MacKichan’s violent Hay Festival lecture on feminism in the New Statesman, so I was in a bit of a funny mood. I was also thinking a lot about the representation of women on stage (and screen). As such, three women coming on stage dressed in the costumes of archetypal fifties housewives sat oddly with how I was feeling. That the piece is directed by two men (Ignacio de Santis and Sergio Calvo), based on the writing of a third man, initially did precious little to offset this unease. On the other hand, the programme seems to gloss over Puig’s homosexuality in terms so euphemistic (“Puig said he took refuge in the cinema to escape from a reality that was not suitable for him... judgements made by others about his way of life”), that you could almost miss the fact that it’s probably the point of the stories, if not this use of them.

So we end up in this weird place where heavily encoded stories by a dissident gay Argentinian writer are used by a group of three women (directed by two men), to make a piece which seems merely to celebrate the actual narratives of the stories – ideas of escapism from conformist fifties housewife-dom, either by actually going off and living the dream of trying to become a film star, or by watching films in between a load of domestic chores. A lot of the stage time is taken up with two of the women, competitively rolling out dough, greasing baking tins, a whole load of domestic stuff.

Tbh, without surtitles, it was impossible to get more out of it than that. The company performed with sufficient charisma to make the hour pass without too much discomfort, even if they were employing a stage-language of such resolute literal-mindedness, it’d have looked staid at the Old Vic. I dunno. Ultimately it *looked* more reactionary than not. But then they could have been reciting Das Kapital while doing it as far as I know, so...
Posted by Andrew Haydon at 11:06