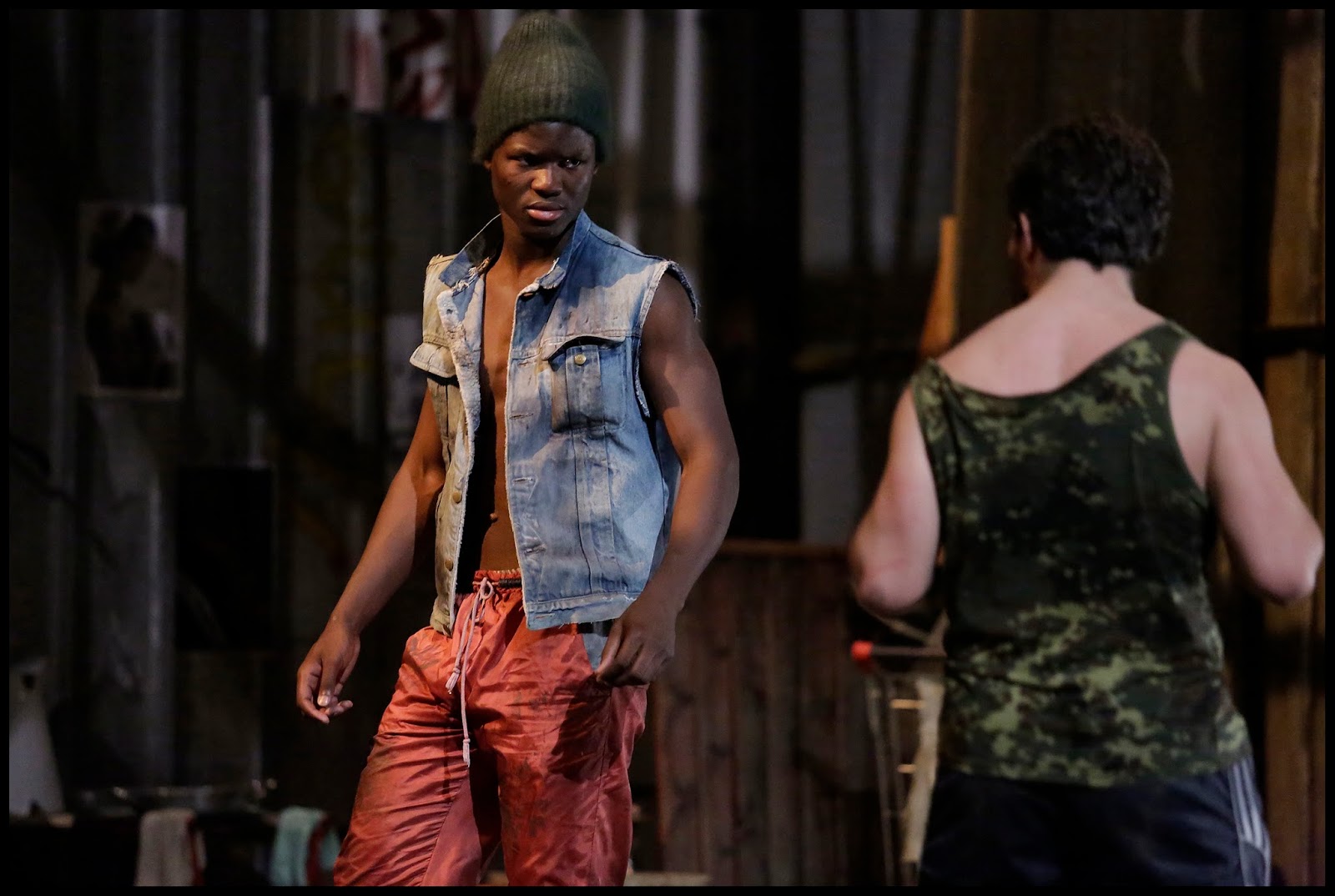 Croatian director Ivica Buljan’s new production of Bernard-Marie Koltès’s 1985 play Quai Ouest (Quay West) is an odd beast. Commissioned by the Festival on the strength of his production at the festival last year, it’s a Portuguese-language production of a French play using Portuguese actors directed by a Croatian, who directed them speaking French. Got all that? Good.

The results are, well, mixed. Advertised in the Festival programme as being 1hr30, it turned out to be 2hrs20. As a result, I spent the latter half of the production thinking it was probably the longest hour and a half of my life. Which it literally was. If I’d been braced for 2hrs20, I think I might have felt more kindly disposed to it. Similarly, if it had started earlier than 21.30, I might have struggled less with the whole staying-awake-through-it thing (it came after this, this, and this).

So, yes, during the performance I wasn’t feeling very kindly disposed to it. That said, having slept on it, I wondered how I’d have felt about the piece if it was the only show I saw in a day, and it had had English surtitles. Much better, I think. There was still a massive sticking point and it was this: the whole performance started on something like defcon one. Or the second highest level of tension in that John Wright exercise (the highest level there is paralysis. IT definitely wasn’t that). Basically, everyone was hyped-up to the max and screaming their heads off from the get-go.

The (also infinitely long, but strangely watchable) pre-show, had two of the male members of the cast (programme has cast-list but not character names) vigorously exercising, lifting weights, doing push-ups, boxing, and generally looking ripped and topless. It was striking and visceral. If the rest of the show could have managed to communicate this coiled tense energy without the resorting to shouting then it could have been remarkable. At several stages I was recalling Ivo van Hove’s A View From the Bridge, and trying to pin down what it was about that that made virtually the same acting style work so astonishingly there that wasn’t working out here. (Other comparisons to Sebastian Nübling’s work with Junges Theater, Basel or No99 would also be relevant.)

Something else about the production was also fascinating – it had a more-or-less constant musical soundtrack (again, not unlike the van Hove). Here, instead of Faure’s Requiem, however, it played, well, from what I remember it was mostly smoky-sounding jazz, which, along with a (pre-recorded?) voiceover lent the whole thing the air of a modern film noir, crossed, inevitably, with David Lynch. Jean-Guy Lecat’s huge naturalistic hangar/warehouse set adds a Tarantino-like flavour to proceedings.

Not having English surtitles, the absolute intricacies and subtleties of the plot – I already vaguely knew the play from ages ago – eluded me, but didn’t seem too crucial. The relationships, even through the adrenalised yelling, seemed pretty clear. Maria Delgado, writing in ‘Other’ Spanish Theatres, says of Quay West: “[it is] one of Koltès most emblematic works, a brutal interrogation of outsiders entrapped in a hostile urban wasteland, an abandoned warehouse, vestige of a once bustling dock in an unnamed city which we presume to be New York... The play, rejecting clear plot lines, exposition, narrative development and psychological reasoning, revolves around a series of encounters – all governed by commercial motives – which bring the various displaced persons together. All the character are enmeshed in a climate of deals and transactions that bind them in a series of complex and unexpected ways.”

I couldn’t have put it better, even if I did speak Portuguese.

I’m not sure that in this production I’d had automatically assumed it was New York, though. Granted Koltès initial inspiration was this, but here – perhaps because it was played in Portuguese – I didn’t for a moment think about America. (Aside: that’s a strange thought, isn’t it? As a native English speaker, I basically get that something is American normally from the attempt at the accent. Or, in the case of Germany – especially the productions of Frank Castorf – I get that characters are American because they’re wearing cowboy hats, draped in the star-spangled banner, and generally sign-posted to hell and back. Here I don’t have any insight into how they might be thinking. I imagine it might be like a non-English speaker watching a modern dress English production of Chekhov. There’d be no real reason to think what they were watching was “set in Russia” at all).

Throwing the question of Buljan’s general aesthetic out to colleagues – apart from several glowing character references, which make me really want to meet the guy – I got a brilliant response from the Slovenian critic Rok Vevar, which situates his work in a longer/wider context: “As the theatre director he’s mostly loved and adored because people cannot really make up their minds what they are seeing when they are watching his performances.

“The problem is that they are not all good but most of the people that I’ve talked to have a hard time articulating which Buljan is good and which not so much. - I think he’s well off with non-realistic texts or specifically the texts that use highly poetic language to address a certain hidden reality or ‘physically burning issues.’ - What he's doing as a director is supplying a language landscape with some kind of a parallel stage reality that is very corporeal, physical, material or sometimes even animalistic. (That’s why some novels can be useful for him for staging.) What he's doing as a director is that he's searching for a physical stages/ levels of language with his actors/ performers. He does not really know how to or want to make a psychologically consequent representations of characters and he's not interesting in coherency in stage narration. He's making theatre as a kind of praying machine - exorcising something from the language to show its vital aspects. - Basically as a director he’s sculpting language or searching for its proper body/physicality or cry for it. His performances are humorous but in many cases painful as well. I think Koltès is his playwright. - He’s not good with the texts that function as musical score - the ones that he has to compose and conduct in the musical sense.”

Which is about as brilliant an articulation of what I saw as I could wish for – and with the added advantage of knowing more of the oeuvre.

So, yes, that idea of physicality – an actor quoted somewhere else recalls rehearsing with Buljan as non-stop physical training to achieve a kind of trance-like state – is really present here. On one level it feels slightly problematic that it doesn’t immediately become a legible stage language. On the other hand, we’re open to other sorts of ways of theatre working on stage, right? It’s a matter of the stage teaching you how to watch it, or, if not the stage itself, then context, criticism, and colleagues’ explanations. Now I’ve had the conversation, it feels like the thing that was worrying away at my mind – the sense that even though in-the-moment I hadn’t *liked* the show there was something valuable, not-dismissable, about it – has been satisfied.

It’s worth noting that my Romanian colleague Iulia Popovici observed of his Zagreb International Festival: “...mainstream, big names, rather boring. But I'm not Croatian.” Which I can also imagine. Describing the SpielArt Festival in Munich, I found myself saying: “It’s the sort of place where you would see Forced Entertainment, but not, for example, Quay West.” That sort of Big Euro- Regietheater that to the younger generations’ most-forward-looking artists, it the Main House Establishment that they’re kicking against. Since all that stuff is relatively new to me, I certainly don’t have the same level of fatigue, and can recognise the artistry (even if it’s not exactly panning out), but at the same time, even with my unfamiliarity, the feeling that it’s established style rather than experiment still reads – although, here it’s complicated by the fact that this was also a totally new way of working for the Portuguese cast.

Ultimately, what I think I’ll take away from the production was the way in which Buljan used the peripheries. On either side of the huge warehouse set, the characters who weren’t appearing in a particular scene would creep and scuttle around, watching the action in hiding, or simply getting on with some curious, impenetrable task of their own devising. It was perhaps this, the creepiness of the voyeurism, and the fear of the voyeur, that signalled that this was work from a director of some vision, even if the central action of that vision wasn’t quite coming off in this instance.
Posted by Andrew Haydon at 15:07