What a difference a day makes. Yesterday I posted my review of Argentine writer-director Romina Paula’s O Tempo Todo Inteiro, and attached to it a fairly stream-of-consciousness monolgue about my worries that thanks to my taste in theatre I was turning into some sort of unarmed Anders Brevik-style Northern European supremacist.

After posting it I went to meet a Portuguese theatre friend unconnected to the Festival. It turned out to be an incredibly useful way of spending the time for me, as he’d read all the stuff I’d posted and was able to fill in a lot of context and tell me where my suspicions and feelings had been correct and where I could have done with a bit more insight. If nothing else, it felt like a real vindication of what appears to be my current policy of saying as honestly as possible whatever it is I’m thinking and letting that be the start of a conversation rather than the end. (My intractable views on L’Architecture de la Paix [forthcoming] notwithstanding.) Perhaps naturally, the piece we ended up discussing most was the review of O Tempo Todo Inteiro. Not least because it was the first show by Romina Paula, whose secosnd show we were going to see after having our coffee. The contextual stuff he explained about “Argentinian Theatre” (scare quotes, because obviously it’s actually pretty diverse) was especially helpful. Yes, he conceded, it might look like dull naturalism (and that’s not his thing either), but what doesn’t come across in just looking at it is the special sort of minimalism, that the Argentinians have developed. Like, super-pared-back naturalism. Ultra-minimalism. Lorca without the poetry, just stripped down to bare essentials. Paula had taken the Williams text and carved it down to just one event. Put like that, it sounds a lot more exciting. So I was refreshed and quite up for having another stab at *getting* Paula’s work.

As it happened, I’d already accidentally had a look at the publicity photos for the piece (I’ve been trying to go in blind on that score) and, as you can see above and below, they’re pretty promising, right? (“Yes, Andrew, they do look a bit German...” “Fuck off.” “Rightio.”), but it was reading the intro-cum-director’s note in the programme before the show started that really got me interested. It’s worth reproducing in full:

“Fauna is the third work by the Argentine company El Silencio, formed in 2006. When comparing El Tiempo Todo Entero, the second play from the company’s original repertoire (which is also being performed in this year’s Festival), Romina Paula acknowledges that “Fauna is less simple, has more layers and is more literary. I don’t know how far it can get.” Where did it come from is something that author and stage director also cannot tell: “I do not know where Fauna came from. I remember having asked for the name of a street: Conceptión Arenal. A street that I had gotten use to refer without thing that it was the name of someone with enough credit to have a street named after her. I started searching on Conceptión Arenal and realized that she was a feminist writer of the late nineteenth century who, among other things, dressed as a man to be able to attend university and poetry circles, so as to access public cultural life. This image moves me, the presence of this unknown woman among men opens a door to many others like her. How many of these men and boys were in fact women pretending?

“Fauna is born out of this will to blur the boundaries between genres, a mythical character, a woman both strong and vulnerable, wild and erudite, who finds in male attire an entry to a world she cannot enter. An actress and a film director go on a search for her with the intention to make a film about her. But how do you tell a life story? Specially about someone who’s gone and whose true story intersects in many instances with the fiction that was built upon her? In this sense, Fauna also corresponds to the meta-theatrical reflection that focuses on the problems of representation – rehearsing a play within another – and of truth – thus showing a big, little or no concern at all with the biography of the depicted figure. It also sets out to meet the words of authors like Rilke or Calderón de la Barca, motivated by Romina Paula’s love of literature and a deliberate attempt through quoting to “animate the words of others and give them back a body.”


And I was thinking: blimey, that’s some synchronicity. This is basically Argentinian Adler and Gibb, right? In the event, at least to look at, it’s not half so meta-. But, blimey, from the get-go I was a whole lot more into it than O Tempo... Sure, this could ultimately be down to any number of extraneous factors (nice day, good food, good conversation, decent travel – getting a boat, rather than taking a car over the bridge, etc.) but I think mostly it was down to the design, conception, and even subject of the show.

This piece is played on a large wooden stage-on-a-stage. The rough boards seem to suggest a landscape, rather than an indoors, or if indoors, then perhaps vast, hangar-like studios, rather than a suburban domestic interior. (Having just met the Scottish critic and Howard Barker expert, Mark Brown, who was here until Thursday, I was reminded of one of the many things Barker said that made me love him as a playwright when I first came across him: that at a certain point in his career he vowed he was never going to write another scene set indoors, or, if indoors, never in a normal room.)

And, yes, there is something transformational that happens to the stage when rough wooden boards are perhaps being asked to play a vast open plain or industrial size interior. The whole auditorium suddenly feels charged with this more exploratory, speculative atmosphere. That idea that suddenly anything *is* possible. (As the recent piece in the Sydney Morning Herald on The Motion of Light in Water has it: “We’re always being told that theatre is this amazingly malleable form where you can do anything, become anything, the only limit is your imagination – and then you go to see another play about a white middle-class family”.)

Now, all this is essentially a big preamble to me still not having the fainting fucking idea what anyone was actually saying on the stage [I’ll ask over dinner tonight], or at least not much. It opens with (I presume) the actress playing the actress playing Conceptión Arenal reciting Rilke. And later there’s a discussion of Shakespeare. But, I suspect this might be a play worth getting a rough translation made of and sharpish. I don’t *know* – obviously – but clearly, thematically it seems to occupy a weirdly contemporary/synchronic position, and, hell, how much contemporary Argentinian theatre do we ever get on see on mainstream UK stages? (Apols in advance if the script turns out not to have legs.) But, yeah, on this showing, can I imagine Lucy Ellinson or Denise Gough leading a production at the Gate next year? Está certo. 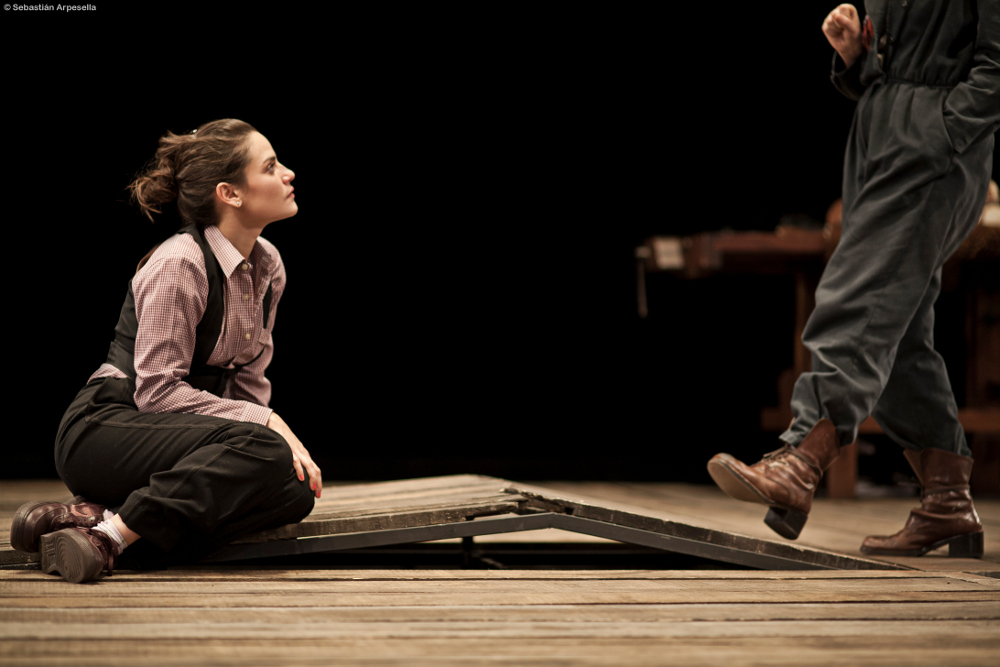