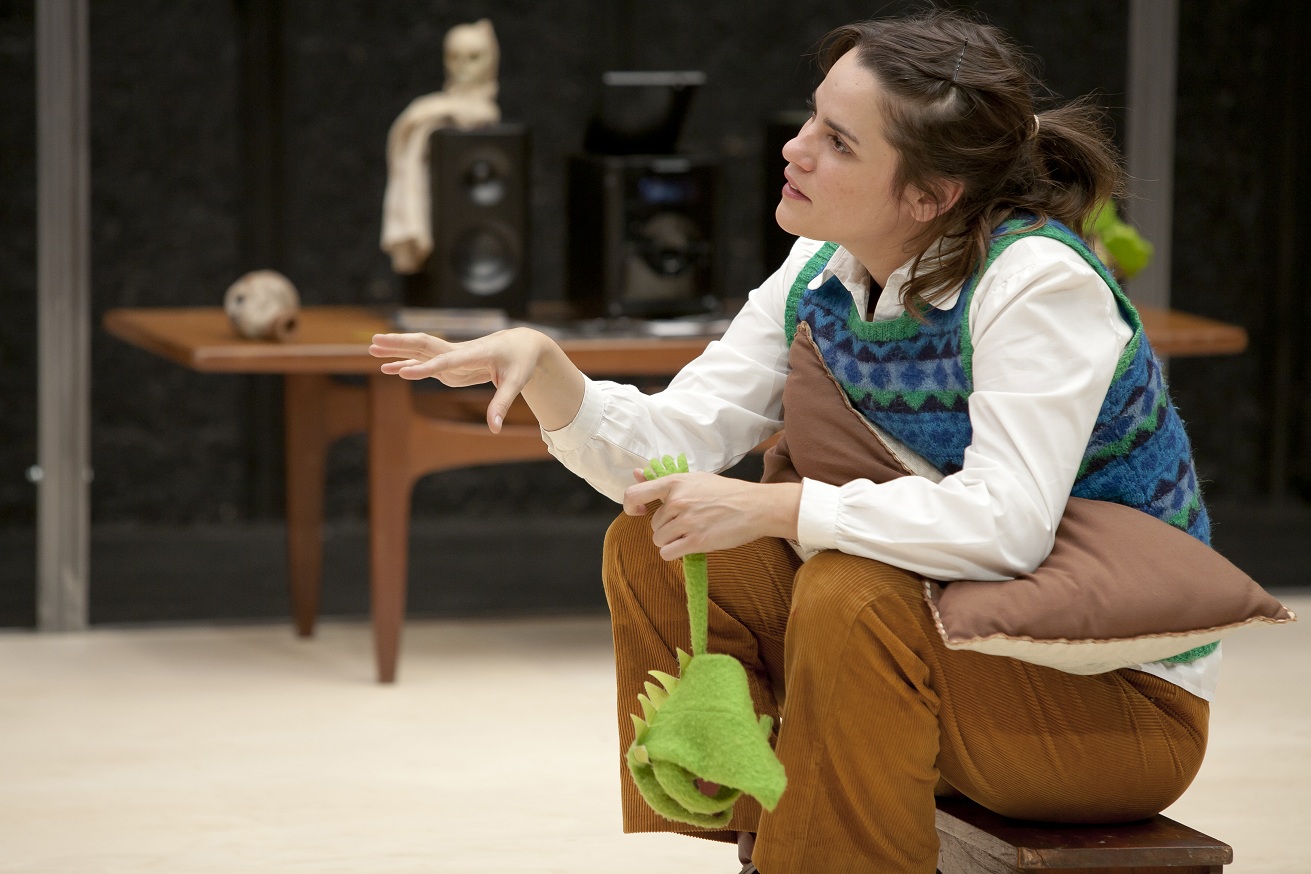 Argentine writer-director Romina Paula’s O Tempo Todo Inteiro is the auteur’s “dialogues with” Tennessee Williams’s The Glass Menagerie. The rationale for creating it is apparently because, at least in part, “copyrights are expensive”. Which strikes me in equal parts as brilliant, hilarious and foolhardy: massive hubris as a cost-cutting exercise. In the event, my Portuguese-speaking colleagues tell me that it was actually a pretty awesome script/play. However, at the risk of sounding like a broken record, THERE’S NO WAY I CAN POSSIBLY KNOW THIS WITHOUT SURTITLES.

To look at, O Tempo Todo Inteiro is about as purgatorial a thing as you could wish not to see, however. To keep myself amused, after the first twenty minutes or so I started keeping a note of every single visually interesting thing that happened on the stage. There were literally five. The piece was an hour an a half long.

Alicia Leoutre and Matías Sendón’s set did the production’s visual appeal no favours. Basically playing on a poor man’s Thomas Ostermeier set – a big living room delineated by a large metal frame describing the side and back walls, a door, and a cupboard – it also suffered here from playing on the stage of a large concert hall, replete with a lovely warm-coloured wooden wall. As such, the “intended” effect – certainly the effect in all the press photos provided to the festival which show it bleak on a black box stage – was supplanted by something altogether cosier and more reassuring.

On one level, it feels like a crying shame to be reviewing an apparently beautiful play – delicately saying something about everything; about the point of life, or lack of it, with everything submerged beneath surface conversations – by just talking about what I could see. On the other hand, I think my Portuguese interlocutors might be a bit (a lot) less hardline than me about regie and the visual (great band name). This was naturalism gone mad and limp. People who looked like the people they were play standing in a room filled with the furniture that room would be filled with, talking to each other like people do. Obviously that’s fine. Obviously. But none of it looked even remotely interesting. Really. I’ve seen David Hare plays with more visual interest and incident. It really was spectacularly uneventful, even by the often stultifying visual standards of naturalism. (But of course, I have no way of really knowing how I’d deal with this in a British context. What, for example would I really have made of Wastwater if I hadn’t understood a word. A lot more, I think, but it’s hard to know for sure.)

So, yeah. Not really much I can do with this. Apparently it’s a really careful, subtle play. I’d say it’s a catastrophically dull staging, even if you do know what’s going on, but on its own terms the acting seems good, committed, even watchable to a point (a point curtailed by the compounded pointlessness of watching without comprehension).


As a result of this, and not having anything to distract me during the play, I did find myself having a bit of a think about other things I’d seen without surtitles in languages I didn’t understand. This includes all the stuff I saw early on in Germany and a whole edition of the year’s best Polish theatre at Warsaw Theatre Meetings (crucially, a national showcase, never billed a “international”). And I was stuck by the fact that, going by those pieces, I actually liked (even loved in some instances) watching theatre in a language I didn’t speak. (Another reason, other than assuming there would be surtitles, that I accept this commission.) And yet here none of the Portuguese or Argentinian work I’ve seen so far has made anything like the same impression. (Granted, I found Circle Mirror Transformation fascinating, but...)

I’ve found this interesting. And I’m having a hard think about it.

I think it’s fair to say that both German and Polish theatre is very different from the majority of Portuguese/Spanish-language theatre being presented here (which I emphatically won’t presume to be representative of *all* Spanish- or Portuguese-language theatre). The former tends to have whole extra dimensions beyond the text. The staging and performing have a significant dramaturgical impact on the whole. In the case of several productions here (including a few I shan’t be writing about), there’s a real sense that all that’s been thought about is the most literal way to present the script. Actors who “look like the characters” in rooms that “look like the room” saying the words in the script “convincingly”. And, in the worst cases, without even a decent stage-design in evidence.

Back when I went to the Swedish Theatre Meetings festival in 2008, I wrote an “ask the stupidest question you can think of” piece for the Guardian wondering about the extent to which an entire country’s theatrical output might not appeal to a specific individual (me). I was pretty convinced at the time, at least on the showing of that festival, that Sweden had nothing of interest to offer me. I now wonder if that might not have been more sensibly framed as being a problem of the tastes of the selection panel combined with their own dumb insistence on pieces being “nationally representative”. After all, the next thing I saw in Sweden (Ingenting av Mig, five years later) was awesome.

But, despite it’s curious social structures and superficial lack of conflict, Sweden is at least a Northern European country. And, in my head, in some weird thumbnail-sketch way, I feel like I like Northern and Eastern Europe. On some stupid level, it feels like I at least slightly *get* them. I get the landscapes. I love the sound of the languages. The whole thing feels like *home* on some inexplicable level. I admit that, on the same thumbnail-sketch level, feel almost entirely the opposite about South-Western Europe (Southern France, Spain, Italy, Greece and Portugal), let alone South America. I *really* don’t get the climate and I wonder if that has a bearing on a the culture.

It was my desire to confront this idea, which feels like a ridiculous prejudice, is most of the reason I’m here. And I’m willing myself to be won round. And, finding out more and more about the country’s history and culture are certainly helping me understand more about the place. But history, culture and politics haven’t signalled a shift in aesthetic appreciation yet. While everything’s been *fine* at the level of design, *nothing* South-Western European or South American has yet really connected with me on the gut level of say a bare-stage, modern-dress Polish Three Sisters or Andreas Kriegenburg’s Der Prozess. My favourite aesthetic experience so far has been Ivica Buljan’s Macbeth, a Slovenian show on a bare stage with some LX tape on the floor.

Lisbon is obviously absolutely gorgeous, and the more I find out about Portugal’s history – the strange “in Europe but not *in Europe*” narrative: a right-wing dictatorship from the 1930s, sitting out the war, and finally being overthrown and losing its empire in 1974 – the more I find to relate to, and yet the actual plays, so far, that I happen to have seen, seem strangely too naturalistic and *too relaxed*. Of course, all this keeps coming with the massive health warning that reads “I NEED SURTITLES BEFORE I CAN REALLY SAY FOR SURE” (even a synopsis would help), but in terms of the purely visual, and listening only at the level of sound-rather-than-comprehension, I find myself missing the total dramaturgy of Northern and Eastern European theatre, where, even if totally lost, I find myself continually astonished and enthralled rather than irritable and dismissive. 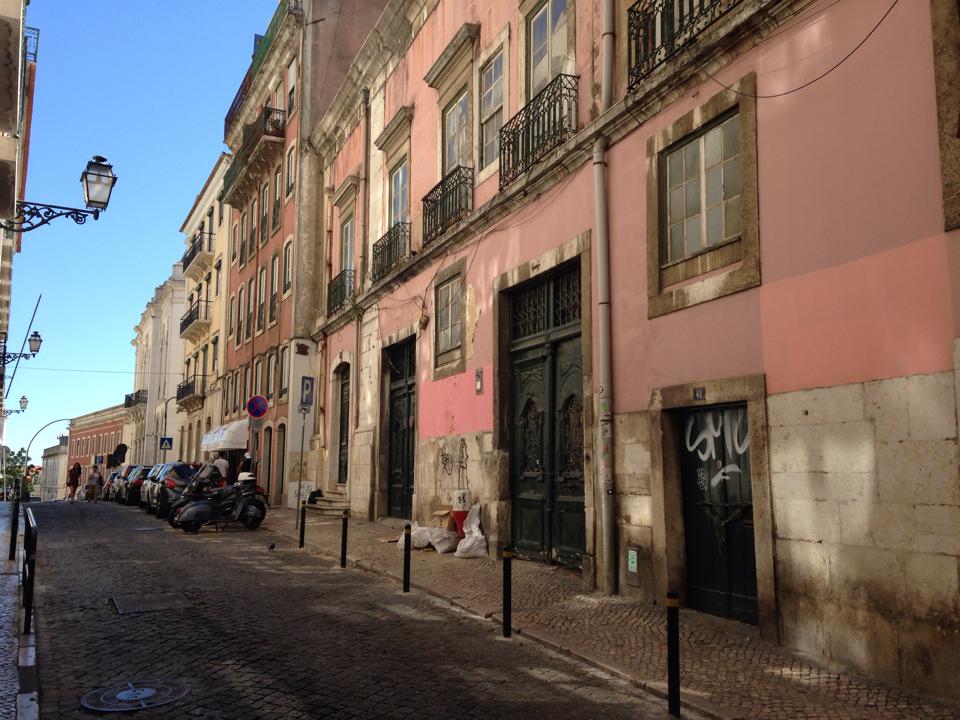