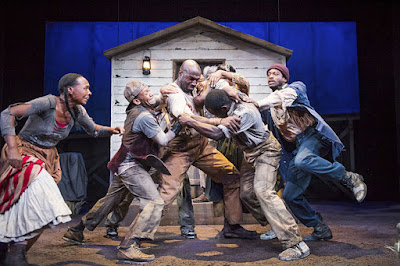 “Writing about theatre” is such a stupid medium sometimes. The problem with Suzan-Lori Parks’s Father Comes Home From The Wars (Parts 1, 2 & 3) is that it’s great, bad, and indifferent all at once. What? Well, while watching, I was alternately fascinated, alienated, Verfremdung-ed, and back to fascinated again, along with a healthy/unhealthy mixture of emotional responses, no emotional responses, intellectual responses, and not-so-much-with-the-intellectual-responses. The next day (last Friday), my head was fairly buzzing with *Thoughts About The Play* (although, tellingly, Thoughts About The Production were far thinner on the ground). Then life intervened, and now, only four days later, I’m having to start from near-cold to write about the thing, with next to no strong feelings left (compared to, say. Cleansed, which took at least a month to stop having strong feelings about).

The question is: at which point would it have been best to write? I suspect if I’ve had to write an overnight review of this production (which is also The Play), then it’d have wound up been a bit of a callow telling-off for the thing.

Jo Bonney’s production is either a) fascinating, or b) too mannered to really land. In-the-watching it often feels like more of a slog than we’re used to in British Theatre. (But, weirdly, not enough of a slog for it to count as European.) The stage is dressed like a Very Old-Fashioned Stage Set (design: Neil Patel). The performances play with a kind of Brechtian naturalism – i.e. the actors are kind of playing inhabited, psychological versions of their characters, but at the same time, turn outwards and verbally comment on their characters sometimes. It’s also played quite slowly and deliberately (*stageily*, in fact).

Then there’s the script. Written in three parts (as the title rather suggests), the first hardly sets us up for what to expect from the second, nor does the second set us up for the third. The parts are indeed distinct. The structure is original (even if the story is nominally nicked), so we cannot watch with genre-familiarity. Instead, we watch genres being torched and our expectations being thwarted. As such, in the moment, it’s quite frustrating. I think I probably came out feeling quite irritable. This irritability is significantly countered by the subject matter. As a white man, you can’t just watch a play about the crimes of slavery (and, by extension, the catastrophic problems of the modern USA, and also UK) by a black woman, and say “Nah, you’re doing it all wrong”. (On the other hand, you can, but you should probably have a good long hard think about what’s made you uncomfortable before putting finger to keyboard.) There is, I think, a level of complexity in both the writing and the production here that seems to anticipate and wrong-foot criticism, though.

Similarly, the language is both anachronistic and vividly textured. It might not be delivered in a way that always makes it seem terribly user-friendly in-the-moment, but perhaps that’s because it’s aiming for a slightly longer-term impact. You took in what was being said, and were able to relate to it and think about it, but perhaps didn’t get dragged over the footlights into the emotional core of the piece, so much as sitting back and thinking about it. (At least, that was were I think I ended up.) Part of the reason for this is also that the characters think, exist, and speak in a kind of multi-temporal reality. On stage, they’re characters in an American Civil War setting. In the room where you’re also sat, they’re also black Americans from the present day. The text of the play relates to both, and to the classical Greek mythology which it is also (sort-of) adapting (Homer’s Odyssey).

Having read no pre-publicity *at all* (not particularly on purpose, perhaps there wasn’t as much as usual. Draw your own conclusions as to why), I didn’t know about the Odyssey thing, so it turned out to be a bit of a surprise when it all went full Il Ritorno d'Ulisse in Patria in Part 3. (And, oh, how I’d love to see the David Marton version of this play.) As such, I can say that in-the-moment it felt like a complete wrong-turn given where the play had been heading. Thinking about that feeling was perhaps the most valuable part of thinking about the play. This idea that I had some very fixed pre-ideas about what American plays by black female writers about slavery *should do* seemed as good a reason to me for them not to do those things at all. Instead of being neat, or direct, the play instead kinda veers off into what feels initially like a quite secondary examination of fidelity (and indeed, into a blood-less (literally) Oresteia, with “Ulysses” – our hero, Hero, re-names himself after the handily-monikered American Civil War General – going full Agamemnon and bringing home a new Cassandra-like wife; after Penny, his wife, has been broadly shunning the affections of his stay-at-home friend Homer).

On slightly more mature reflection, it stuck me that this sudden focus-pull on the idea of “fidelity” was precisely what the play needed to drive home its intellectual work on the ideas of freedom and slavery that had persisted throughout – perhaps because it completely wrong-foots conventional pieties so badly. However, it’s the parallels drawn between the state of slaves in Southern US states Then, and the terrible atrocities (and general state of the place normally) Now where the really heavy blows land. At one point, Hero explains that his being owned by a white man is a form of security, and that he doesn’t imagine the police will just take “I belong to myself” as much of a reason to respect him, as it would if he were property. Which is chilling, and, apparently 100% accurate as an imaginary prediction of the (then) future.

So, yes. In the moment, it feels like a slightly stilted, if extremely clever affair. In the long tail of having seen it, the piece appears to grow and strengthen in character and stature.

Ultimately, it is fascinating to (finally) see a piece from America that is wholly against America. Ordinarily, I think I’d think it was catastrophic that the Royal Court had opened its new season with an American play. In the case of Suzan-Lori Parks, despite coming from the world’s most stultifying theatrical culture, the sheer force of her anti-US propaganda makes this an absolutely vital document. For its real cultural value, it feels like all real judgement has to be suspended until America has voted. Is this one of the last plays from America before the whole sorry mess goes up in flames again, or just something recent from business-as-usual land? We shall just have to wait and see.