[seen 29/07/14]
Do reviews/plays need trigger warnings? If so, this is probably one of them 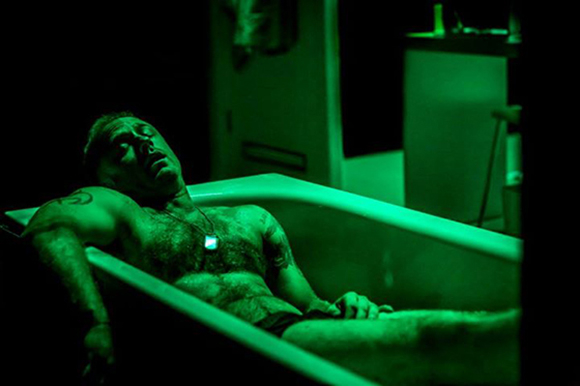 My expectations for Benedict Andrews’s version of A Streetcar Named Desire were unreasonably high. Those expectations were based more of less solely on his production of Three Sisters, with maybe a bit of Schaubühne-backstory thrown in for good measure. However, sadly, as with Medea the day before, this Streetcar left me cold.

And, like Medea, I have to say, I’m really not at all sure about Streetcar as a play. Last year I spent several months in the rehearsal rooms of the Lyric Hammersmith’s Secret Theatre Company as they were creating their own version of the piece. A production, incidentally, that it turns out Benedict Andrews would have been well-advised to have been to see, since he (I’m sure unwittingly) makes a lot of the same decisions in his production, so everyone who saw the ST production is left with a weird déjà vu of diminishing returns.

I should flag up that *at the time*, I was way less keen on the Secret Theatre version of Streetcar as I was on the production of Woyzeck with which it played in rep. Streetcar, for my money, felt a) like they’d left the play alone too much, and hadn’t eviscerated the text in the way that such a godawful, creaky, hysterical, florid old mess desperately needs (I *really* don’t like the play one bit, do I?), but also b) like the directorial decisions that Sean [Holmes] had made, made the thing even more cruel and unpleasant. On mature reflection, I think (b) was an important step. And I did think the ST production was immensely powerful. Granted, it was the somewhat short-circuit-y power to make the viewer intensely depressed, but, that’s still real power. And, thanks to the totally missing-the-point furore about *Secrecy*, most of the real value about “Show Two”’s radicalism – just the casting alone, not to mention the do-it-in-their-own-accents thing – was completely overlooked. Although part of me does think it would have been better if all that genius radicalism had been applied to a better, shorter, less intensely woman-hating play than Streetcar.

Woman-hating? Really? Well, yes. Surely. Over the weekend – off the back of my review of (the script of) The Nether – I got into an ‘interesting’ discussion (again) about the perceived misogyny in the plays of Simon Stephens. I don’t really want to re-hash it here too much (key article here, which I think exhibits some astonishing confirmation bias). The basic premise for the people who say it’s a thing is this: that his plays show women suffering at the hands of men. Now, in the plays where this happens (and, clearly that’s nowhere near all the plays Simon’s written), I would say there’s a demonstrable intent that the play condemns this situation of women suffering at the hands of men. And, well, look, they’re real things that he’s writing about: Simon didn’t invent human trafficking or psychotic blokes or misogyny. I’m aware of the counter-argument – brilliantly articulated by Doon McKichan recently here: that protraying violence against women a) perpetuates it, and b) is a kind of violence against women in itself. At the same time, I wonder how it works when BAME actors are arguing for greater representation, why feminists are arguing for less representation of one of the most pressing issues. Of course, there’s representation and representation. And that, I guess, is where we get back to Streetcar...

On one hand, Blanche Dubois is a whacking great part which a tonne of actresses are clearly dying to play. Indeed, the seeds for the genesis of this Young Vic production seems to lie with its star Gillian Anderson. (And, y’know, props to her: rather than going to the West End and doing a boring *normal* version, she’s come to the Young Vic and done a version directed by Benedict Andrews, which is only boring by accident.) On the other hand, the entire play exists to allow us to watch an alcoholic woman with severe mental health issues gradually unravel, then get raped, then be institutionalised. The whole piece plays like a power-struggle, and it’s one where – given it’s classic status – we already know who’s going to win, and still come along to watch it anyway. And I’m not sure what watching it actually gives us.

Andrews’s production is set on a small constantly revolving platform which represents the Kowalskis’ flat. The kitchen is a single unit against one (not-present) wall, the “living room” bleeds into the the bedroom, with only a flimsy curtain to separate them, and the bathroom is through a door at the far end. Magda Willi’s set offers a metal frame to describe the room’s dimensions, and real doors. Outside the front door there’s one of those outside metal fire exits which run up the side of American buildings. It’s an interestingly standard “Schaubühne/Ostermeier” set, from the designer who once hung a grand piano over a classroom of Turkish students for Ballhaus Naunynstraße’s Verrücktes Blut.

The stage’s state of continual revolution is interesting. I’m pretty sure it’s just bad luck, but I think I saw Gillian Anderson’s actual face maybe three times in the whole evening. The back of her head is fine, but not very expressive. But, yeah; we need to talk about Gillian Anderson. On a very basic level, she’s quite strange casting for a natural-ish-tic production. The things we learn about Blanche is that she “looks old”. And hates it. And I guess is meant to be less attractive than she was. And, well, without wanting to be all Charles Spencer about it, Anderson doesn’t exactly look like she’s spent the last few months-shading-into-years falling apart, drinking herself insensible, and turning tricks for cash in a cheap motel. But, that’s all fine. It’s acting. It’s theatre. I’d be happy to ignore all that – although the fact that every time something disparaging about her appearance is said onstage there is an audible ripple of amused snorting round the audience (ditto to the suggestion that Vanessa Kirby’s notably slender Stella has “put on weight”). No, the real problem with Anderson’s Blanche (for me, at least – and, again, worth mentioning a tonne of people effing loved it) was the strange combination of accent, voice-work/diction, breathing, and a weird sort-of hermetic-ness about her performance. *Every line* feels like it’s been pre-prepared and is then delivered, accent-perfect, but a bit *outside-the-moment*. On top of this it felt like about half her lines got swallowed up halfway out of her mouth lost in a tangle of accent, back-to-my-half-of-the-audience, and other physical factors of theatre.

By contrast (contrast mostly with Secret Theatre), Ben Foster’s Stanley was really interestingly different to Sergo Vares’s. Where Anderson’s Stella feels pretty much template-standard, the contrast between Foster and Vares is fascinating: for me, Sergo made complete sense of Stanley as someone who started chippy, violent and intimidating and just escalated. Foster, on the other hand, has Stanley as someone largely unassuming with a bit of a temper when pissed. Someone who gets wound up by Blanche, rather than someone openly hostile to her from the get-go. In a way, it’s a much more sympathetic portrayal and, as a consequence, feels that bit more disturbing whenever he turns out to be a violent, wife-beating thug or, ultimately, a rapist. The scene in which Stanley rapes Blanche also feels slightly fluffed. At the start it looks like Blanche is about to kiss Stanley back and then she passes out. As such, the rape itself mostly involves Stanley riffling through the frou-fru layers of Blanche’s pink taffeta prom dress (oh, count the symbolisms yourself), rather than the violent or silent struggle and staring horrified eyes more usually deployed. The result is – appallingly – much less difficult to watch (although still horrifying).

Corey Johnson’s Mitch is pretty much exactly as a the script demands, physically he seems spot-on and Johnson has a real facility for inhabiting Mitch’s no-man’s-land between judgemental, reactionary sexual politics and compassionate humanity. Similarly, Vanessa Kirby – as with Adele Leonce’s in ST – is a thoroughly modern Stella. I read some preview or something that said this sort of fighty, steadfast, give-as-good-as-you-get dynamic is quite new. I have no idea how the play could even be bearable without it. Did Stella used to be a dowdy punchbag? Jesus. Re: staging – there’s an interesting bit where Stan‘n’Stell are getting down to some make-up sex after he’s smacked her in the face (which is, well, actually it’s pretty sodding horrific. There’s a strong strain of “you don’t know what goes on in other people’s r/ships and if they’re fine with it then it’s fine” philosophy running through the plays. We’re not really invited to condemn Stanley for his DV any more than we’re required to feel sorry for Stella. She doesn’t seem brutalised. And this in itself is pretty horrifying, isn’t it? Or problematic? Not that you really think any of these things at the time, because you’re mostly too reoccupied trying to hear what Blanche is saying and being irritated by her self-performing, but also at Anderson’s performance of her self-performance) where Stanley leaves the room and Stella continues writhing on the bed in the throes of sexual ecstasy. It’s not immediately clear if he’s still meant to be in the bed *really*, and the shade of him that Blanche watches leave the rom and leer at her is a kind of phantasmal foreshadowing of things to come. I hope so, because that would be nice. It’d have been nice if there had been more touches like this.

Finally, once again, I’m left completely perplexed by the response of the mainstream media, which, without exception, has praised this production to the skies. This accords with roughly only 30% of my actual friends who have seen it, where after a maybe agnostic 50% were 50% pretty much dismayed and wondering what happened to Andrews’s mojo after Three Sisters. Now, maybe it was my seat (although there shouldn’t be a bad seat in the house with a revolving stage, right?), and my seat for AVFTB was in a far weirder place, and I couldn’t have loved that more.

So, yeah, odd. My view isn’t a minority one, although it seems to be minimally represented among critics. Not really sure what to make of that in this instance. Nothing, probably. Kind of most interested in why we think Streetcar is an alright thing to keep staging. For me it seems almost entirely pessimistic and abusive. Discuss.
Posted by Andrew Haydon at 11:48