[bit overdue. Sorry about that] 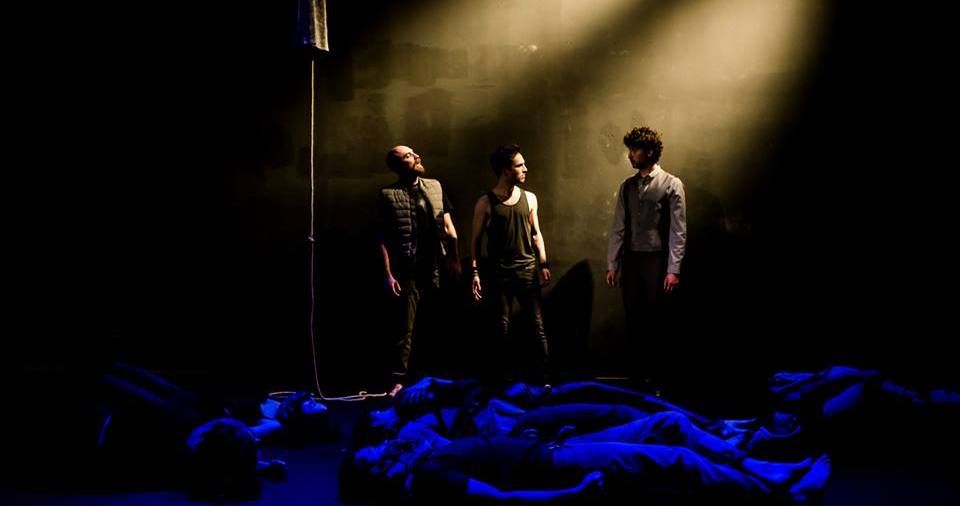 The Faction’s world première production of Gareth Jandrell’s new play Thebes is a two hour (plus interval) conflation of Oedipus Rex, Seven Against Thebes and Antigone (plus one scene from Oedipus at Colonus). As such, its middle bit occupies roughly the same territory as Martin Crimp’s latest play, Alles weitere kennen sie aus dem kino (it being an adaptation of Phoenician Women, which is Euripides’s version of Aeschylus’s Seven Against Thebes).

As a result of Alles weitere... the last version of Oedipus I saw was Pasolini’s astonishing, hallucinogenic, more-or-less-unwatchable, brilliant 1967 film, Edipo Re, which completely removes the usual classical dignity we’re used to in theatre and replaces everything with an intelligently conceived bronze-age realism.

Both Alles weitere... and Edipo had done a lot to sell back to me the idea of Greek tragedy as something that still has some point in the modern world and Jandrell’s new play carries that good work forward.

The brilliance at the heart of Jandrell’s script is in its structure and conception. Rather than stretching just one of these narratives out over a similar length of time, each story has been filleted down to a lean 40 minutes or so. Even so, you would probably have to be a Classics student of profound scholarship to really miss anything. And what you gain as a normal theatregoer (i.e. me) is a profound gratitude for a real sense of momentum. But it’s not just momentum, here possibly for the first time, you get a real understanding of why anyone is actually doing what they’re doing. Granted, it might have been useful for Jandrell to have even gone further and included the bit where Oedipus defeats the Sphinx and is thus made King of Thebes in the first place. But as he has gone to the trouble of pretty much stripping out all the other supernatural elements (apart from the accuracy of the prophets/seers), perhaps that would have sat oddly.

This added momentum works especially well in Antigone, which, without the backstory (as I’ve always hitherto been watching it), you do come to Creon as an unreasonable dictator who just seems to get off on being difficult. When you see the ferocious war which Polynices waged, and imagine the number of the dead, you suddenly understand why Creon is so adamant that he doesn’t get to be buried. However, when modernising the language, I’d have gone for “fascist” rather than “terrorist”. It would have made for a more knotty problem. Don’t audiences now tend to automatically mistrust any leader using “terrorism” as a reason for anything?

Elsewhere, though, Jandrell’s modernisations feel pretty rich and pregnant. Pinning Thebes to nowhere in particular except perhaps a modern version of itself, it resonates as everywhere from variously Rwanda to the former Yugoslavia. The language itself is pretty interesting. There’s a certain roughness to it, at once lyrical and abrasive. There are a tonne of new coinages, or slightly off-kilter uses which could be incredibly irritating, but actually end up being quite arresting – by drawing attention to themselves, making you actually consider the word, and the meaning, rather than just letting familiar sentence after familiar sentence roll by like an agreeable countryside.

All this praise duly lavished, I should talk about the actual acting/direction/chosen performance style. Which, I ended up rather admiring without quite knowing how. Put bluntly, I don’t think Thebes is done in a style I’ll ever much go for. There’s no set, and the stage of the New Diorama feels especially flat and shallow in comparison particularly to the steepness of the seating rake. Added to this is director Rachel Valentine Smith’s lamentable decision to include a bunch of ensemble-made sound-scapes. (I think a lot of these are speculatively included in the script, but that could have been ignored.) There are few things more wretched in theatre than a bunch of actors all making a whooshing sound with their mouths in the semi-darkness. I can try to respect them, and their impulse, and their right to choose that aesthetic, but I’ve yet to ever fathom why anyone would ever do it. Later, though, they mostly stop with the whooshing and whistling, and turn instead to stamping, shouting or plainsong, and these bits are much better.

There is also something incredibly strange about the chosen acting style – which feels more mannered than anything I’ve seen on the British stage for an aeon. What it felt most like to me – and I say this with (obviously) no experience of the real thing – was a kind of impressionistic version of what some of those old National Theatre or RSC productions of the classics might have seemed like. There is An Awful Lot of RP speaking going on, and at totally unnecessary volume. I notice in the programme that someone is credited as “Voice Coach” – and I can see how this might be that weird problem you also find at the RSC: that if a director isn’t careful, whatever work they do is totally undone by the Voice department coming in and telling everyone how to speak their lines like they were Mariah Carey and all of literature was the Star Spangled Banner. Trippingly on the tongue doesn’t even get close. Interestingly, the only actor who dodges the RP bullet entirely is Derval Mellett (Antigone), who is properly fierily intense and angry, funny and totally credible. Her Ophelia might well turn out to be the best thing in Faction’s Hamlet.

But, as I say, despite all these massive misgivings about the vocal style, the ensemble soundscapes, and, let’s be honest, a bit of the “physical theatre” element that has also been grafted on (just don’t do it, kids. It’s not the 90s any more), the production completely won me round to itself. No small achievement, given the above. But it never once stopped being watchable. And that – much more than whatever tired, middle-aged artistic reservations I might have had – is what matters. Not only does it stay watchable. It becomes increasingly compelling. So even while maybe wincing a bit at the way a line has been done, you’re much more interested in what’s happening, and the story, and the politics of both the story and those that have been added to the text: there are bits where you think it might almost have been profitably called Occupy Thebes.

Indeed, this is perhaps the text and production’s most compelling overall quality – that by the end, it has made Antigone especially feel very much like a play for our time: a play about a ruling class utterly divorced from any kind of a reality ignoring popular sentiment until ultimately their refusal to listen brings about their destruction. Which, for a tragedy, is a pretty cheering ending.
Posted by Andrew Haydon at 17:57