[contains a certain amount of blow-by-blow account. If you’re going to see it (which you should, I think) maybe read after] 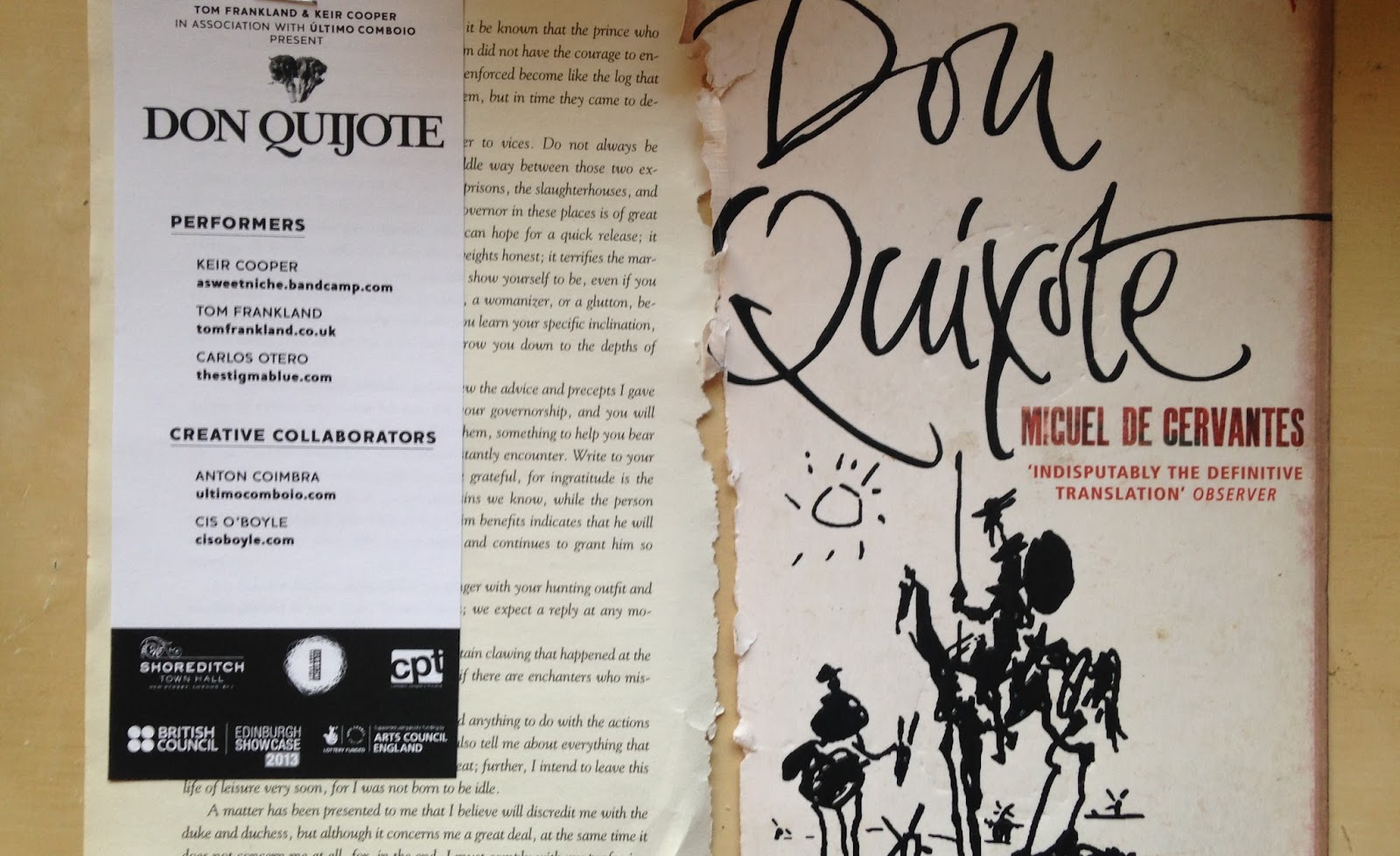 I can’t remember the last time I felt this grateful to a piece of theatre. Tom Frankland and Keir Cooper (in association with Último Comboio, also starring Carlos Otero, with Anton Coimnra and Cis O’Boyle as creative collaborators)’s “adaptation” of Don Quixote is pretty much the perfect start to the year a blast of dark light and hopeful hopelessness in the January cold. It’s basically an hour-long, lowest of lo-fi, punk performance lecture on themes suggested by Miguel de Cervantes’s groundbreaking two-part novel. (A novel I have never read, and, given its doorstop-like qualities, probably never will.) In fact, more than “performance lecture” this is really “performance literary criticism”, albeit enacted by three blokes (plus, last night, Hannah Nicklin as the “Guest Quijote”) with a drum kit, distorted guitar, a bagful of “doing-it-crappily” effects.

The thing opens with torch-made shadow puppetry – or rather, a torch panning across a mostly static landscape. Buildings, people, knights on horseback, monsters and windmills – obviously windmills – move across the walls; like your shadow on a dark road when a car drives past.

Frankland then introduces the book. Literally introduces us to a physical copy of the book. Of which he then saws the spine with a circular saw. And, my God, I react badly to seeing books mutilated. There is something actually properly dangerous-feeling about this sort of treatment of literature. Of course that’s largely just an old commodity fetishist speaking, but then ill-treatment of books has a pretty distinct history and no one who’s done it has ever been progressive before, so the company are deliberately deploying one of the only shock-tactics likely to make a left-liberal audience feel shock. And it’s kinda great.

This literal “de-construction” of the book – Frankland then hands round the pages – takes place as he explains the novel’s brilliantly weird history: Cervantes wrote the first book, and then promised a second, which it seems likely he wouldn’t have written if other people hadn’t started writing their own “Part Two”s. Oddly, this whole story was told to me for the first time at a party in Zagreb late last year, so this bit had the weirdest possible resonance for me, connecting a damp basement in North London (Don Quijote is playing in the CPT’s cellar, rather than its conventional studio space), to a flat in the north of ex-Yugoslavia. That’s one of the hidden things that’s brilliant about this show: that is it taking a work of *world* literature, rather than parochial Eng.Lit; a book understood, loved and studied across the globe; a book that, on many levels, couldn’t speak less directly to our times and condition. It takes the book and makes it about precisely the thing that the company need it to be about.

What the company need Don Quixote to be about is – and forgive how basic this is – acts of rebellion. It’s no coincidence that Don Q. is opening CPT’s Hard To Resist season (which, following hard on the heals of the feminist Calm Down, Dear season, marks Jenny Paton and Brian Logan out as some of the canniest programmers on the alt.fringe right now). So their thesis is this: Don Quijote is a figure defined by the purity of his gesture and perhaps even his understanding of its inevitable failure. They talk about how Cervantes was captured and imprisoned or enslaved by pirates for five years, and had lost the use in his left arm. This, they tell us, is a book made from ridiculous amounts of human suffering. A book about a madman who is determined to prove a valiant knight, without a hope in hell of succeeding. They tell us about how the novel claims to be a history translated from original Arabic.

Anton tells us a story about how, just before he came over the the UK to do the show, he had been working in a primary school with children, and how, on the last day, he had bought 20kg of flower petals and had showered them over the children’s playground with the help of a massive fan as a farewell gesture, and had told the woman he loved that he loved her as they stood on the school roof watching children running around madly in the falling petals.

And then, of course, the real Anton turns up on Skype – projected onto the opposite wall – and tells us that he’s not sure about this actor (Otero) who is playing him. It’s a brilliant way of illustrating another strand of the book – the inauthenticity, the lie, at the the heart of it. And also a perfect example of why the inauthenticity itself is part of the fun, and not a lie at all, so much as a better way of revealing something true. And, oh, it’s clever, right? So you sit there enjoying both the stories, and the fact of the way that they’re being told cleverly reflects *as theatre* other important aspects of the book itself. (In a related, but completely different way to what Mitchell did with Waves/The Waves, thinking about it.)

The cmpany share with us some individuals who they’ve nominated as modern-day Quijotes, these start off with a guy who’s built a working space rocket in his back garden and keeps applying to NASA for a licence to launch it, and get progressively darker. People who have been imprisoned for their beliefs, for their naked rambling, to people who have been beaten up for how they dressed. There’s an unmistakeable left-leaning agenda, which is at least as inspiring as it is slightly over-stated. But it’s no less powerful for being blunt. The companies question to us is something like: wouldn’t we all be better off if we did exactly what we needed or wanted to do, no matter how against society and doomed to certain failure it was. Wouldn’t that be a better, or at least a possible way of trying to change the world – by changing our worlds. TBH, my inner Žižek (yes, I actually have one) recoiled slightly at this. What, I/inner-Žižek wondered, was the difference between this and rampant Rand-ianism? Isn’t Howard Rourke about as Quixotic as it gets? IS this the way we should interpret the book? What about communalism, and, well, socialism? But then this is anarchism, not communism, isn’t it?

Perversely, and perhaps connected both to that Pollesch quote about capitalists and love stories and to an excellent thing Tim Crouch quotes in the “documents” section at the end of Modern British Playwriting: 2000-2009: “For art to exist, the idea of one thing must be given by another thing” (Etienne Decroux). Because this was obviously art, but stating its political agenda quite bluntly, I ended up reading the piece as a terrific vindication of glorious failed attempts at love affairs. Which, y’know, worked for me. I think there are about as many other ways of relating to the piece as it has audience members.

There’s a final sequence where Nicklin returns from her own Quixotic quest with her audience-member Sancho Panza and starts shredding pages of the book. (More violence-against-text! Still shocking.) She then blows it at us using the fan – already a windmill stand-in – and in a blizzard paperstorm that follows you find yourself thinking: Yeah. Ok. I’ll take that. The inevitable failure is part of why makes a thing wonderful and romantic in the first place. And, yeah; I’m a terrible romantic.

This is also why revolutions shouldn’t be run as a romance.