[apologies in advance for not liking] 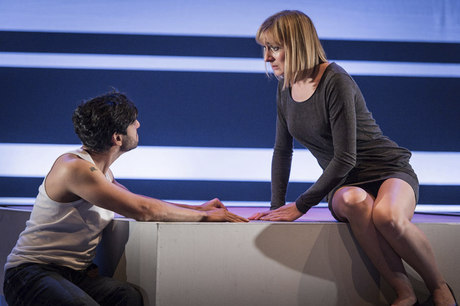 Oh lord, this is hard.

Ok. I didn’t really like Ciphers. And it feels a bit like this review is just going to go through why.

So, positives first. At no point was I bored. The play, whatever its faults, isn’t boring, which is the worst thing a play can be. So that was good. James Perkins’s set – a series of upright shallow square boxes, some of which occasionally glide across the stage was attractive, effective, functional and evocative. Gary Bowman’s lights and Gregory Clarke’s sound were both very fine. And as a whole Blanche McIntyre’s production seemed to be the right sort of production for this sort of script.

After that, it all gets a bit more nit-picky.

I should start off by saying this is not about genre. At least, it’s not about my objecting to genre drama (which I don’t). Ciphers, as you probably already know, is about spies. Or rather, that is its nominal subject; the thing that’s plastered over the marketing blurb. Maybe that question of genre is pertinent after all; not because of my objecting to it, but precisely because I actually really love spy films, novels, etc. For my money, impenetrable though his books are, I think John le Carré pretty much raised the spy novel to the level of art. Not difficult art, sure, but there’s something masterful about the way that he made cold war espionage into a metaphor for the human condition. Members of the secret services, he seemed to imply, were possibly actually the most honest humans going, since at least for them the daily evasion, lying about who you were, and small everyday deceits were all part of a job, and were – at least during the cold war – being undertaken for ostensibly ideological reasons (although le Carré also does a pretty good job of scotching any notion that attachment to an ideology can be a clean, noble or effective course of action). So perhaps I went in with too rigid an idea of what I want from a spy play. On the other hand, I’d like to think I was open to persuasion to something else.

And, actually, Ciphers opens really well. Ok, the first scene in this production is pitched a bit high – Gráinne Keenan as GCHQ/MI5/MI6 interviewee Justine is almost impossibly on-edge and Shereen Martin as her interviewer Sunita maybe a bit too pointedly “cold”, but the second scene, introducing us to the Russian spy Koplov is played all in Russian. Which pretty much knocked my socks off. When Bruce Alexander (Koplov) is later revealed to be a British actor, I don’t think I’ve ever been more impressed.

I get the impression that the play was partly inspired by one of those stories that seem to crop up in the papers where a British agent is found dead in mysterious circumstances. [As an aside, Snowden and the NSA stuff apart, when did British papers start thinking it was Ok to publish stories about our secret services as idle gossip-fodder and tittle-tattle? (possibly when half of them were bought by ex-KGB Russians, perhaps :-) )] It all takes a bit of a while to unpick. Scenes jump backward and forward in time, and we gradually realise that each actor is playing two roles – which, yes, is sort-of a nice comment on the nature of a secret service, and sort of quite a distracting way of designing a play for staging (the doubling is stipulated in King’s script).

What emerges is the story of Justine, this incredibly jumpy, nervous former marketing manager, who, thanks to a load of language skills, gets accepted by whichever branch of the secret service this is meant to be (given that she goes straight from domestic MI5 stuff to spying on a Russian, which is MI6’s territory, I’m not sure it’s meant to be any reflection of the real British intelligence community). Her first job is trying to convince a Muslim youth club worker to turn informant and then run him – trying to gain intelligence on a suspect who has gone off the radar.

At the same time, at the art gallery where her sister works (sister – not meant to be a twin, is also played by Gráinne Keenan), she meets a reasonably famous, married British painter, Kai (played, like the Muslim youth group worker, by Ronny Jhutti. His wife, Anoushka, is played by Shereen Martin – the MI? Controller). Kai and Justine start an affair almost immediately, and it feels like the already diffuse focus of the play shifts mostly onto this. For a while it feels a lot more like watching Patrick Marber’s Closer occasionally intercut with the odd scene from Spooks. And yet, for all that the themes of adultery and espionage seem almost inextricably linked, here the threads here don’t seem to be pulling together, even as you understand how they could.

What’s hard, I think, about the play is that it’s hard to really know what it’s about. Well, no. I’m not a child. It’s about lots of things: the pressure on an agent, the pressure on someone having an affair, the pressure on a double agent, the impact of your job having fatal consequences for others... Lots of things. And all familiar tropes from spy stories. And yet here, it don’t really feel like this is a play either about the secret services, or adultery, or about gender, or about the politics of having a secret service.

Another problem is that frequently the dialogue just gets distractingly direct. People speak in direct statements almost as if they’re frustrated that a particular bit of plot isn’t being explained quickly enough. I think I could have taken about another half an hour of the play (as it is, it runs as two 50 minute halves of a 15 min interval) if everyone had been more relaxed and talked more in euphemisms and subtexts. Here, it often feels frustratingly bald.

And then there’s the way its been played. The production style has opted largely for creating a sense of urgency by having most of the actors behaving pretty urgently most of the time. There are exceptions: every time Bruce Alexander comes on, he seems to bestow a sort of calm on the other actors. He is excellent, and the other actors, in their interactions with him, seem to step up a notch. They’re suddenly in a scene with a real person, so they start behaving a bit more like real people themselves. It think it would be easy to blame the script here, but just as an experiment I tried reading a bit of it to myself imaging Alec Guinness and Ian Richardson from the BBC version of Tinker, Tailor, Soldier, Spy (not seen it? Do yourself a favour and take seven hours out of your life to watch it. Probably every year) and actually, it felt totally plausible that that sort of lifelikeness, character and deliberation could easily be equally found here. Of course, that seems to amount to something of an admission of desire – that I really want this to be a ‘70s BBC serial (peopled almost entirely by men). I don’t think that’s the case, though. Despite its being frequently ridiculous, I also found Spooks hugely watchable (and its dialogue is far worse and its over-urgency much more so than here – which is interesting in itself). I suppose really I just found the levels of tension unconvincing. Or rather, they made sense on a human level, but I’m not sure having them so surface visible makes any sense. Unless this is a play and production whose principle aim is to demonstrate that modern Britons simply aren’t cut out for roles in the secret world because they are altogether too emotive, then I think it just needs a lot of reining in. As it stands, Justine should never have been given the job in the first place as she is plainly too anxious and is the world’s worst liar. I’m afraid I found both of Martin’s performances – one at either end of the heightened emotion spectrum – equally unconvincing. And as Kai and Kareen, Jhutti seemed to just pick different irritating mannerisms to differentiate between them.

None of this makes me happy to say. I would really have liked to have loved this, but it just got more and more difficult. Then the penultimate scene actually kills the entire piece stone dead. Possibly this is a grotesque failure of imagination or understanding on my part, but nothing about the rest of the play really sets it up, so rather than feeling like a clever twist it feels like a preposterous shark-jump that totally fails to clear the shark in question.

It’s a shame. The entire thing feels like it was made in extremely good faith. There’s not a hint of ego, or arrogance, or anything like that. It just feels (at least to me, and I almost hope I’m just wrong and in a minority) like everyone just got really involved and it went off somehow in a direction that didn’t work. That happens. It’s fine. It’s a shame but it’s fine.
Posted by Andrew Haydon at 18:30

I completely agree with this review- this was such a disappointment. It really could have gone somewhere but it just turned into a dull tragic love story. What interested me was the sister's worry of being followed; this was quickly dismissed as paranoia but I felt this could've been much more ambiguous, and more time should've been spent on it.

Also, the play didn't really seem to know whose story it was telling (the sister's story was the most interesting IMO, i wanted the sister to uncover the affair etc instead of us just seeing it happen). The non-linear narrative felt too forced and self consciously "this is theatre not tv!!" (although tv thrillers like Spooks, Waking The Dead etc regularly use flashbacks and non linear storytelling, so there's nothing inherently theatrical about it anyway). Plus, with the frustratingly short scenes (I agree with what you said re: over exposition in the dialogue) and awful 'cinematic' transitions, the piece just felt like a budget Chimerica, without the ingenious design which made that (in my minority opinion, pretty poor) play so wonderfully watchable.

However, I'm not sure what you saw in Cipher's design- the concept was alright but the execution was just terrible; it looked as if it had been knocked up in an afternoon, and the moving parts were embarrassingly clunky. And that tiny screen, inexplicably in the back of a chair, used for about 10 seconds to very little effect (and I doubt that anyone further than 5 rows back could actually see what it was showing) felt like something from a student production.

I don't mean to rip the production to pieces, but it really wasn't a very good piece of theatre. I can't believe that it received four stars reviews all over the place.