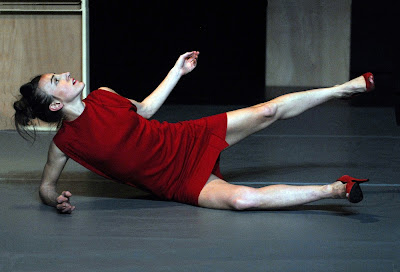 Catalan choreographer Tomeo Vergés’s French company Man Drake’s Anatomia Publica begins with her charmingly and candidly telling us a bit about herself: her mother was a doctor, her father was a butcher. She herself trained as a doctor before becoming a dancer. Her mother’s mother, her grandmother, her husband went off to fight on the front in WWII just after her mother was born. He did not return. Her grandmother began a new relationship. Then he returned. And from then on, the three of them lived together. Vergés confesses that she often wonders what it was like to live in that house.

The lights go off and come up again on Maxime Kurver’s minimal grey dancefloor and few Spartan white wooden flats upstage left. There is a noise. It sounds like a warm, fuzzy, base-y recording of one of those mechanical processes in which the various constituent parts form a looping rhythm. Perhaps a photocopier doing non-stop copies of a long document, or some industrial canning machine. It has the feel of a more ambient version of something by Einstürzende Neubauten. It is perfectly judged. In a slightly synaesthetic way, it feels like exactly the right colour of music/noise for the lighting design, the set and the costumes.

The piece opens with a man and a woman. The man in dressed in three or four shades of grey. The woman wears a vivid red dress. (I was glad it was a female choreographer. That “put a woman in a red dress” thing can sometimes feel stupid and trope-y. Here it feels necessary and effective.) She is sitting on a chair in the centre of the room, he’s hovering by one of the walls. Their movements begin slight and barely perceptible. They are each performing one small adjustment to their stance. You gradually come to realise that they are repeating the same tiny gesture over and over again. The gesture develops. The repetition of the newly developed gesture continues. The same small movement is repeated over and over again. Then a new movement, perhaps “the next movement” in whatever the two figures are doing. Again it repeats over and over again.

The dramaturgical sleight of hand deployed here is quite brilliant. I guess it’s become a cliché for us to talk about art that teaches us how to watch it, but Anatomia does it perfectly. The two or three minute introduction cleverly plants every idea of how to watch the piece gently in our minds. Without any overt or clanging underlining the short tale of the ménage à trois, the professions of the parents, all these elements completely frame how we understand the fifty or so minutes of abstract movement that follow. Instead of being utterly opaque in purpose, we can choose to focus on how the stuttering, looping sequences might reflect and describe the situation we’ve been told about. It feels like this bit of focussing is incredibly helpful. It also frees us up, I think, to worry less about “meaning” and to notice smaller, more complex elements of the choreography. At first you think the game is to do with both (and then “all three of”) the performers being in sync. Then you notice that individual repetition cycles can vary in length from performer to performer. And variations are introduced. Breaks into continuous movement occasionally occur. The at-times, borderline-unbearable soundscape is broken by bursts of pop music. I found myself reflecting on the extent to which the rhythms of the piece seemed to brilliantly second-guess how I was feeling, how something would go on almost precisely “a bit too long”, but no longer. As if the piece knew what people could take.

Watching contemporary dance is an odd thing – perhaps especially if you’re “a critic” (or, rather, if you’re going to write about it afterwards). Nick Ridout’s point about how being “a professional viewer” changes your relationship to a work always feels much more nakedly present for me. Because there is effectively “no narrative” and there are no words, I find that I have a more-or-less continual commentary running in my head which feels weirdly similar to writing a review in my head as I watch – explaining the thing to myself, thinking about how I’d explain it to anyone else, all the way through. But I can’t quite stop myself believing that this is also how other people experience it too – albeit without the strange fact that after the show they won’t have to write all those thoughts down in some semblance of order.

But, this thing of experiencing a work of art primarily as something you talk to yourself about in your head for its entire duration feels like something worth, I dunno, thinking about. Contemporary dance (and, yes, even if this is part of the London International Mime Festival, I would put this firmly in the box marked “contemporary dance” and actually proper, right-up-to-the-minute *contemporary* contemporary dance, which feels like it’s actually moved on from copying Pina Bausch. The piece I’ve seen before it reminded me of most is Sebastian Mattias’s Tremor, which at the time felt like the most futuristic, advanced bit of contemporary dance I’d ever seen which included actual movement and no talking), contemporary dance seems to be the medium in which I experience this sensation most strongly, although watching modern orchestral music has a similar effect, and maybe even wandering round some art galleries – but also, I guess, it’s how one experiences life. It’s how we walk around a supermarket, or catch a tube – with a strange narration of ourselves, or argument about some abstract concept or other, or a strong memory suddenly tumbling unbidden from out of nowhere into the forefront of our minds.

It’s interesting to consider, in the light of our unruly minds, how hopeless it might be therefore, to try to relate my experience of watching some contemporary dance. I think it’s a testament to the dramaturgical genius going on here, then, that Matt Trueman and I came out having had more or less an identical set of shareable thoughts. (Full disclosure: thoughts which we did indeed then go and discuss afterwards for a good half-hour or so. But then, I think that *can* be useful and clarifying for writers-on-theatre even if it is meant to be “against the rules”.) The fact that we were both reminded of a bleached-palette Francis Bacon, the stop-motion photographs of Eadweard Muybridge, the fact found similar things suggested by the repeated movements; the ideas of lives negotiating themselves, of a moment of trauma replayed, perhaps; the way that we could infinitely interpret and re-interpret the “meaning” of the movements, even within the carefully drawn frame of the opening narrative. That fact we could also both agree that the piece felt more like an invitation than a declaration, and that it had worked beautifully for us in this way. And the fact that it was going to be a bugger to write about...

I now have absolutely no idea if this piece is communicating anything about the piece. It feels a bit more like long-form free association. Which, on one level, is a perfect reflection of how watching this piece might feel (even if I’m now free-associating about writing about the piece, rather than on themes suggested within the piece itself), I do worry it’s a bit self-indulgent. Hopefully not.

If you want a strong, concise conclusion: Anatomia Publica is a fine, crisp, clear piece of beautifully choreographed contemporary dance – a shattered crystalline structure which perfectly reflects the fragmented lives and thoughts of its protagonists.