Body of an American – Gate 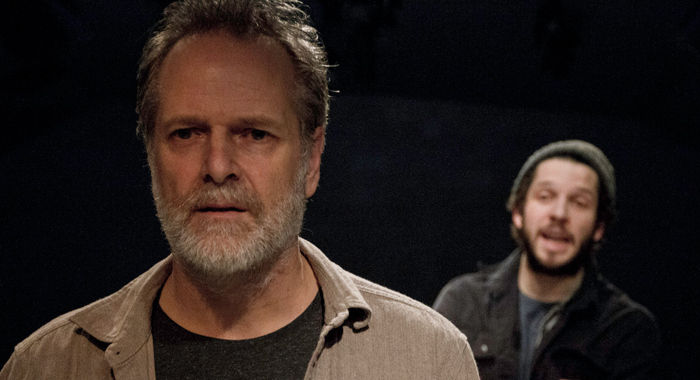 Nominally, The Body of an American is “a play about a war photographer”. In fact it is a hard, harrowing, exhilarating play about personal demons, black dogs and white male privilege.

James Dacre’s production takes Dan O’Brien’s text and slams it into a bunker. Literally. Alex Lowde’s design builds a grey curved shell inside the Gate’s already small room. On a prosaic level it’s like sitting inside an upturned boat, or perhaps the fuselage of a crashed aircraft. More metaphorically – thanks to the low seating and curving walls – it makes us all hunch up: it’s like sitting in a panic-knotted stomach or inside someone’s depression. It’s a space that provokes tension. We’re seated in traverse too (do people really know this bit of stage jargon? It means “arranged like the House of Commons” – here, lengthways rows only two deep on each side). The stage is only maybe a metre across. It’s partly like forced intimacy, and partly like enforced claustrophobia.

Dan O’Brien’s text in performance comes on like a freight train from a Johnny Cash song – inexorable, hard, symbolic and craggy. And in William Gaminara and Damien Molony it has found the best imaginable interpreters. The text itself is made up of emails sent between O’Brien (Molony) and his absolutely real-life subject, the Canadian photojournalist Paul Watson (Gaminara), transcripts of conversations, and other documentary material. That makes it sound like the dullest thing imaginable. It really isn’t. The transcripts contain innumerable other voices, which the pair deliver with seamless switches of accent. Here a South African cab driver, there an Indonesian fixer, and so on. So there’s this brilliant, energetic performance going on – one displaying such a staggering level of virtuosity on the parts of the two actors that even with material half as good it would be a great night in the theatre. But Body of an American has got a text that matches the actors’ talents all the way.

I said it’s about black dogs and white male privilege. The first of these aspects is more or less continually picked over. Body... is savage on the subject of depression, or of that self-destructive instinct people have. About being haunted by the things you’ve done, or even setting out to do those things so that you can hang that sense of being haunted you had anyway onto something tangible. It talks about the holes inside people. It talks indirectly about blistering self-hatred. And it does all this mostly without veering into self-indulgence. Fuck it, it’s an incredible, frank, generous piece *of theatre*. Anyone “indulging themself” to this extent is also sharing an incredible amount. And for my money it’s an extraordinarily courageous, open text which offers an unusual degree of insight into how people work.

The second of these aspects – wite male privilege – is never named as such. But it’s cleverly, surprisingly there; implied at every turn. Every exchange contains it. The very fact of photojournalism contains it. The very choice – even if Watson experiences it more as a compulsion – of photojournalism holds up a massive neon sign advertising it. Paul chooses to travel into other countries, into other peoples’ lives, and points a camera at them. As a choice. An excellent definition of privilege that came up recently was someone describing it as “the ability to think hypothetically about [subject]”. And these wars, conflicts, famines, disasters are things that Paul is outside. Necessarily. Unflinching, courageous, dynamic and vital, though his work absolutely is, there’s that aspect of his being outside the problem, even when he’s right in the thick of it. He can get out. Whatever the slaughter he’s witnessing, it’s not his world or his life, even when it’s threatening his life and it absolutely is the same world he lives in. He chooses to go and visit Mogadishu, he is not the Somalian child sitting on a pile of corpses. Even while staring into the hearts of this darkness, and trying to capture it, he is exercising a privilege. That the play and the production manage to articulate this sense as an almost tangible subtext feels like a real achievement.

Another almost unspoken but clearly present aspect to the play is way that it seems to deal with the idea of men’s relationships to their masculinity, and to their fathers – difficult fathers, here. That O’Brien here look about young enough to be Watson’s son seems crucial. Their relationship has the same fractured, Joycean epic quality as Ulysses.

The American body of the title is that of Staff Sgt William David Cleveland an American Marine whose body was hacked up by Somalians in Mogadishu on October 4, 1993; the man of whose fate Watson took the defining photo – much like “Joe” did for “Tank Man” in Chimerica, in fact. It is his voice most of all that Watson feels haunted by. At the point where he takes the photo, he hears, or imagines, the man – who was hanging between dead and alive at that moment – say: “If you do this, I will own you forever”. Watson never decides whether the voice was real or imagined. It is enough that it rang out in his head at that moment. It is the vocalisation of knowing one is making any life-changing decision: “you will have to recognise and remember and re-play this moment over and over again for the rest of your life, and you know that fact in this instant” is what your inner voice tells you.

The production, though fast paced, gives us all the time we need to absorb this idea. There is an interesting effect that, because we are seated opposite each other, while the images are projected on the far end walls of our metaphorical bunker, we never have to confront the images of the war, or the violence, or the atrocities (or the huskies and snowstorms later, for that matter). And largely, I chose not to, because I’m not good with blood, or death, or the horrific pornography of violence that sways public opinion. But that was also a choice I was conscious of making. I know I could Google all those pictures now and probably find them, and I won’t. This is a play that at the same time as dealing with the not-unseeable (as in: once seen, you can’t un-see it), but also, gently and intelligently, it is about choices.

For my money it’s one of the most intelligent, brilliantly acted plays about this raft of important subjects that I’ve seen in a long time. It has the feel of an authenticity of experience, which, although I find authenticity appalling and bogus most of the time, here just feels like a necessary part of the deal. That William Gaminara has the best face for looking craggy and careworn this side of some idealised mash-up of Beckett and Johnny Cash is added good luck.

Along with Grounded, The Body of an American feel part of the realisation of Chris Haydon’s real, serious project at the Gate. Something which I think I’d initially misunderstood as an infatuation with the States. It’s not that. It’s much closer to something the lead singer of the Sisters of Mercy (bear with me here) said when asked why their 1990 album Vision Thing was so much about American politics said something along the lines of: “Well, they’re quite global, aren’t they? If you care about the world you have to care about American politics.” This doesn’t feel like the product of an infatuation, but of a serious inquiry. Dacre’s production here, as Haydon’s of Grounded did before it, places the show at once in the best tradition of British theatremaking and an also into an enviably global one.
Posted by Andrew Haydon at 19:32