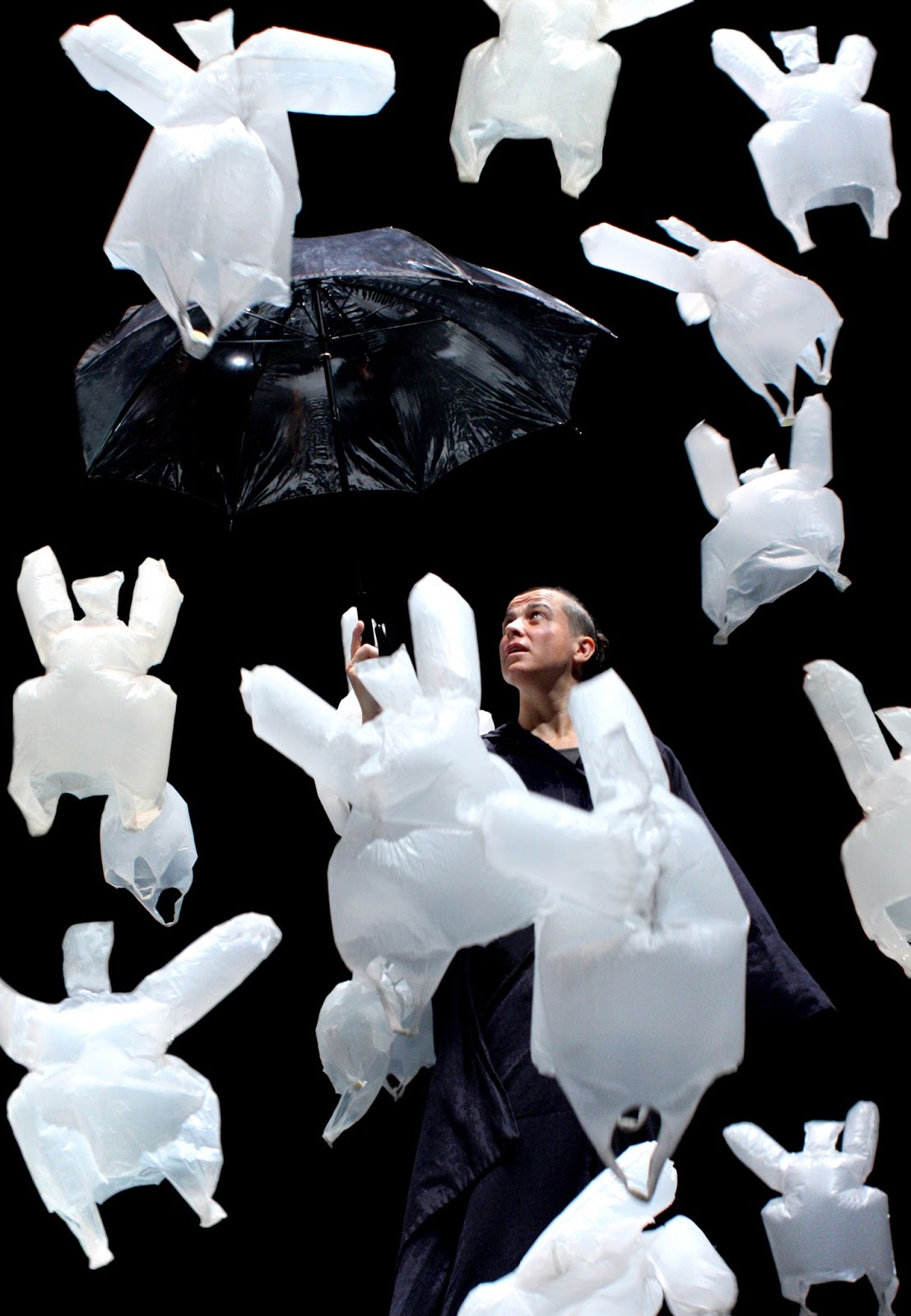 The key to this production is in the title’s punning use of “Foehn”, which, out of curiosity, I looked up on Wikipedia: it turns out to be “a type of dry, warm, down-slope wind”. Which works as well as anything for a place to start to describe what actually happens here.

L’Apres Midi d’Un Foehn is possibly destined to be forever described as “the plastic bag ballet”. And that’s exactly what it is. Woman kneels on stage. Soundscape of slow bleeps plays. She slowly constructs a flat little figure out of two plastic bags and some sellotape (she cuts the second bag to make arms and a head). Figure constructed, she crumples him (I’m not sure why I thought “him”, but I really did) into a ball and leaves him centre stage. The then walks round the circle turning on a number of the very large floor fans which surround the raised, circular stage.

And then the amazing thing happens. Basically, the bag-chap remains centre stage and gradually inflates. “He” then “stands up”, and thus stood begins to pirouette in the winds, blown this way and that, gently and then not so gently, tossed and buffeted between fans “he” appears to dance. The woman throws another bag onto the circular stage which almost instantly inflates and appears to begin to “dance” with the first bag-person.

What we’re looking at here is something that – assuming you’re in an amenable frame of mind – you basically greet with delight and wonderment. I mean, it is just a really, really neat trick. And gradually, you go from appreciating its neatness to being pretty astonished at just how clever I actually is.

I think the company – Compagnie Non Nova, Phia Ménard – must have a couple of people dedicated to almost “playing” the fans; speeding them up and slowing them down remotely, since the level of control they seem to be able to exercise of over these inflated, almost parachute-like people is quite uncanny. At one stage all the little bag-people (oh, yes, there are tonnes at one point) all seem to leap into an upturned umbrella that the woman puts on the stage. The figure of the woman herself is enigmatic and serves both as a puppeteer and then later a possible protagonist.

To say this is a show which resists analysis isn’t entirely either true or fair – I should probably just have taken notes. There are definite “movements”. No mean feat since the piece is only half an hour long, and Debussy’s original music only about ten minutes. But, yes, after the initial solo, pas de deux, and quartet, there are then sequences with many different coloured dancers/figures (these are all bags, btw), a section with only white ones, a section where a golden flying serpent or dragon thing menaces a solo bag-person, and then a somewhat dubious section at the end where the woman and a sole pink bag-person are overwhelmed ina cloud of black bags. Not even black bags made to look like people, just bags. Which did feel a bit BNP (and no, I don’t mean Banque Nationale de Paris). Someone might want to have a look at the symbolism there a bit, maybe.

So what to say about it? Well, it’s definitely gorgeous; totally charming; a delight from start to finish. It’s somehow poignant ad “magical” while retaining just enough cleverness and wit to keep it from ever tipping into anything trite or Disneyfied. At the same time, perhaps because of the lightness, and the gradually expanding sense of what was possible within the compass of this new genre, I kept seeing things and wishing they were pressed into the service of something going somewhere a bit more defined. And also thinking “this would be really great as part of something else”. Don’t get me wrong, it’s great at it is, and I guess part of its pleasure is that thing about leaving an audience wanting more. But, yes, I did want more.

On an intellectual level. Well, I think it definitely had some smarts about it. I don’t think it was trying to achieve some sort of Foucauldian exegesis of anything, or if it was, I missed it because dancing plastic bags. Something interesting I did notice watching it was how hard it was to stop anthropomorphising these bags. Once one had a bit of air in it and its little arms and head were inflated, it was pretty much impossible to start seeing it as a plastic bag again. Which I found curious.

But, look what the Mime Festival has made me do. I’m trying to analyse some plastic bags being blown up and down by a collection of fans. This is surely the beginning of madness. Have we fallen in love with a dream, like the faun of the poem? Perhaps it is something like that after all.