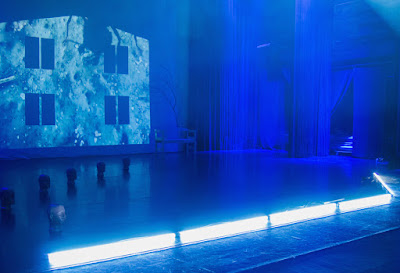 [The Flare Festival’s Wednesday Triple-Bill comprised the 11th, 12th and 13th shows of the Festival (see Tuesday’s Triple-Bill for the 5th, 6th and 7th pieces). So, as you can see, I’ve doing an excellent and logical job of covering the thing, and punctually – the fact of the matter is, what with editing the Festival’s daily reviews freesheet, filing for the Guardian, *seeing* all the shows, and walking between venues, I seemed not to have an awful lot of yer actual writing-time left. Still, hopefully I’ll get it all up to date soon. Then I can get back to that Poznań and London backlog and start covering the Greater Manchester Fringe. Ah, the pre-Edinburgh lull...]

I should say at the outset that I watched shows one and two slightly wrong-footed by the wholly inexplicable presence in the audience of Russell T. Davies (!). Well, I suppose it’s not all that inexplicable, he’s got strong Manchester and theatre connections. Why shouldn’t he come to Z-Arts and watch bonkers experimental European theatre if he fancies it? I would if I were him. But, yeah, still seemed surprising.

Wednesday’s marathon kicks off with Netherlands’ Daan van Bendegem’s Who’s Afraid of Red Yellow and Blue?. The piece takes its title from a series of four paintings by the American painter Barnett Newman. van Bendegem’s piece is essentially a full-on, straight-forward, rapid-fire narrative which, halfway through the Festival, felt *incredibly welcome* and was fallen upon eagerly by Festivalgoers. Don’t get me wrong, I love innovative, challenging, non-linear, abstract work as much as the next man, but the odd cracking story, well-told doesn’t half look tempting after ten pieces of the former in a row.

It gives the context of the paintings’ creation and then describes how one of the paintings (III) was slashed multiple times in an attack at the Stedelijk Museum in Amsterdam in 1986 by Gerard Jan van Bladeren, a Dutch anti-Semite. The piece then tells how its restoration was eventually undertaken by Newman’s friend Daniel Goldreyer in 1991. The restoration initially cost some $400,000, but was heavily attacked by critics who claimed that subtle nuances in the three monochrome sections had been lost and that Goldreyer had used house paints and a roller. According to critics, the painting had been destroyed twice: first during the attack, and again during the restoration. Goldreyer filed a $125 million suit against the City of Amsterdam and the Museum, claiming that his reputation was damaged.

From here, van Bendegem narrates – complete with renditions of hold-music (including a bring-the-house-down Elton John number) – his Kafkaesque attempts to see the various reports, transcripts and etc. on the above-described legal cases. Perhaps the story itself is a bit inconclusive – van Bendegem eventually abandons his quest to find out what happens in order to make this piece, we assume. But, yes, as a simple, somehow joyful excursion into art history, a painter of whom I knew nothing before, and an incident of which I was entirely ignorant, it feels like a great way of spending an hour. (And, expressed as a fraction of the triple-bill entry price, either £4 to £2.66 make it pretty much the theatre-ticket bargain of the century.)

[It would be remiss of me not to note that RTD also seemed to like it, as well he might, being a fellow sampler of the Who’s Afraid... motif. And, yes, I did think it’d have made a nice Doctor Who story. So sue me.]

If you were looking for an evening of stark contrasts, Dorian Šilec Petek’s You Need The Glass and You Need The Milk (Slovenia) couldn’t be more different to the above. Involving NO LIVE PERFORMERS AT ALL, it is essentially a movement for recorded sound, video projection, live lights and a smoke machine, as well as a few objects on stage: seven plastic heads placed on the floor in a semicircle, stage right; and a park bench and tree upstage.

And what happens? Bloody hell. Well, it starts and ends with a recording of John Cage’s Lecture on Nothing. This particular recording takes into account the fact that Cage is a composer, treats the spaces on the page seriously, and as a result actively resists the meaning of the sentences, treating the words as music rather than sense. It is consequently intensely difficult to listen to, and at times, as the text repeatedly suggests, irritating.

In between these Cage bookends are six? seven? other bits of text, seemingly culled from various extant sources. One is the talking asshole bit from The Naked Lunch, another involves a voice like Richard Burton’s, though reading I know not what. While these piece play, and a head on the floor is spot-lit, as if we’re hearing its thoughts, the video projector plays, well, the sort of videos that Psychik TV used to think were a good idea in their heavy LSD use phase.

At various points you tune in, turn on, turn off again, tune out, tune back in and so on. The overall effect is pretty impressively spacey, though. And the final minutes descend into a battle of wills between those who (correctly, apparently) think that we’re just meant to walk out in the last bit of Cage. And those who, knowing it’s only the middle show of three, reasonably deduce that it can’t go on forever, and so stay until the bitter end, with the house lights up on them, the stage in darkness, and the Lecture on Nothing burbling on seemingly, potentially forever.

I confess I have no idea what it was *for* (apart from the the vintage psychedelia enthusiast), but I was strangely pleased to have seen it. And to know that somewhere in Slovenia, this sort of work is being made. Perhaps even as a matter of course by most people. Who knows?

[I don’t think RTD liked this one as much. I think he might have nipped off after it – but who knows, he might always have had a prior engagement...  Oddly, I did have a go at watching it through his eyes, and I have to say, there was plenty in there that a fan of 70s Who could have really gone for. The whole thing entirely comparable to one of those early television attempts at showing the the world as seen through the eyes of someone who’s just been sprayed with some sort of poisonous Martian mind-altering substance, perhaps. Thinking about it, that’s not a bad way of selling a lot of Slovenian work... But I digress]

The last piece, Fight, Fight, That’s All We Can Do by the Polish company Ja Ja Ja Ne Ne Ne was apparently developed in Slovakia (therefore neatly encompassing my last two trips abroad). And, I have to say, it a) bore no relation to anything I saw at either of those festivals, and b) confirmed once again that in terms of what looks like mad freewheeling innovation on stage is still most readily found in stuff we might file under “dance” here (or “live art”), but still strangely often counts as “theatre” on the mainland.

Whether intentionally or not, the title reminded me of that Pina Bausch line, “Tanzt, sonst sind wir verloren”, which I always misremember as: dance, dance, otherwise we are lost. What happens in the half-hour piece is that the two performers – – come on stage in silly seventies, or wrestling costumes, or not very many clothes at all, and do sort of fighting/sort of dancing, to a seletion og bits of music. Some of the fighting is quite real. (And it’s tempting to say that the dancing is less so.) There’s an amusing bit where one of the performers comes on topless to Marlene Dietrich singing ‘Sag mir, wo die Blumen sind’ with a bunch of blumen clutched to her otherwise naked chest and gradually giving them out. I have literally no idea where they were going with this or why, but I was at least pleased to get a joke in German. At another point they sing ‘Tomorrow Belongs To Me’, to everyone’s acute discomfort (even if it is the best song in Carbaret).

At the end of the day, it’s one of those pieces where you’re not sure (i.e. I wasn’t sure) whether it was you not speakingthe stage-language/semiotics right, or whether they just weren’t saying anything particularly important. I’m quite prepared to put my hands up to the former, but it felt like this largely wordless piece had nonetheless failed to cross some sort of language barrier. It might also have been that I was knackered by that point in the evening. I think I thought a lot more things at the time, and even had a vague theory about the history of male aggression that the piece illustrated, but maybe a useful acid test of a thing is the longevity of an emotional or intellectual response. And that theory doesn’t seem to have lasted even seven days.

That said, for all that this write-up might read a bit draggy or tired, it was a great evening, despite the reservations I might have noted above. And the first two pieces were properly invigorating (or, in the case of glass/milk, rather, enervating in a *really interesting way*).
Posted by Andrew Haydon at 19:09